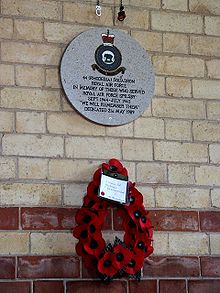 A memorial plaque in All Saints Church, Great Steeping, to the members of 44 Squadron who flew from RAF Spilsby

No. 44 (Rhodesia) Squadron of the Royal Air Force is no longer operational. For most of its history it served as a heavy bomber squadron.

44 Squadron was formed on 24 July 1917 as a Home Defence Corps. The squadron pioneered the use of the Sopwith Camel in night fighter operations. By the end of the First World War it was commanded by Arthur Harris, later known as Bomber Harris.

Disbanded in 1919, the squadron was reformed as a bomber squadron in March 1937 and equipped with Hawker Hinds. Moving to RAF Waddington later that year, it was equipped with Bristol Blenheims before changing to Handley Page Hampdens. During the war the squadron was subsequently based at RAF Dunholme Lodge,[1][2] near Dunholme, then RAF Spilsby at Great Steeping in Lincolnshire.[3][4]

At the outbreak of the Second World War, as part of Bomber Harris' No. 5 Group, the squadron was commanded by John Boothman, winner of the Schneider Trophy in September 1931. It was one of only two squadrons to operate continuously throughout the war. There were two squadron commanders who held the Victoria Cross - Wing Commanders Roderick Learoyd and John Nettleton.

In 1941 the squadron was renamed No. 44 (Rhodesia) Squadron in honour of the Rhodesian contribution to Britain's war effort, and also to recognise that up to 25% of the ground and air crew were Rhodesian. The badge is based upon the seal of Lo Bengula (Lobengula), the chief of the Matabele on conquest. The seal shows an elephant which, in the case of this unit, is intended to indicate heavy attacks.

No. 44 received its first Avro Lancaster, BT308, in late 1941 and became the first squadron to convert completely to Lancasters—flying their first operational missions in the aircraft on 3 March 1942.[5] Total sorties and losses for the war were:

The squadron suffered the third highest overall casualties of RAF Bomber Command. In July 1945 the squadron exchanged places with No. 75 Squadron in RAF Mepal in Cambridgeshire to prepare for transfer to Tiger Force in the Far East for the war on Japan.

After the war (from 1946–1947) the squadron was re-equipped with Avro Lincolns, converting to the Boeing Washington (the RAF name for the B-29 Superfortress in British service, 1951) and then the English Electric Canberra during the Suez Crisis before disbanding on 16 July 1957.

Reformed yet again at RAF Waddington during 1960 as part of RAF Bomber Command's V-bomber force maintaining the UK's strategic nuclear deterrent, the squadron was equipped with the Avro Vulcan B1 from Aug 1960, upgraded to the Vulcan B1A in January 1961. Both types were equipped with various free-fall nuclear weapons.[6] These may have included Blue Danube, US Mk 5 supplied under Project E, Red Beard, Yellow Sun Mk.1, and certainly Yellow Sun Mk2.

After the advent of effective Soviet SAMs forced Bomber Command to re-assign V-bombers from high-altitude operations to low-level penetration operations, the squadron's Vulcans adopted a mission profile that included a 'pop-up' manouvre to above 12'000 ft for safe release of Yellow Sun Mk2, until in January 1968 the squadron was re-equipped with eight Vulcan B2 aircraft[6] and eight WE.177B laydown bombs[7] which improved aircraft survivability by enabling aircraft to remain at low-level during weapon release.[8]

Following the transfer of responsibility for the nuclear deterrent to the Royal Navy the squadron was re-assigned to SACEUR[7] for tactical strike missions. In a high-intensity European war the squadron's role was to support land forces resisting a Soviet attack into Western Europe by striking deep into enemy-held areas beyond the forward edge of the battlefield, striking at enemy concentrations and infrastructure, first with conventional weapons and secondly with tactical nuclear weapons as required, should a conflict escalate to that stage.

The squadron's Vulcan B2s served mainly in that low-level penetration role until 1982[9] when they saw action during the Falklands War. No. 44 Squadron was then disbanded on 21 December 1982.[10]