No. 16 Squadron is a flying squadron of the Royal Air Force. It formed in 1915 at Saint-Omer to carry out a mixture of offensive patrolling and reconnaissance and was disbanded in 1919 with the end of the First World War. The squadron reformed on 1st April 1924 and again took on a reconnaissance role which it continued throughout the Second World War.

Post-war, the squadron was disbanded and reformed several times and was converted to a bomber squadron. Equipped with the Tornado GR.1 from 1984 the squadron took part in the Gulf War in 1990. It was again disbanded in September 1991, before reforming in November 1991 as the Operational Conversion Unit for the Jaguar. With the Jaguar's imminent withdrawal from service, the squadron disbanded once more in 2005.

16 Squadron reformed again and took on its current role on 1 October 2008. Based at RAF Cranwell, it instructs pilots in elementary flying using the Tutor.

An observer of the Royal Flying Corps in a Royal Aircraft Factory B.E.2c reconnaissance aircraft demonstrates a C type aerial reconnaissance camera fixed to the side of the fuselage, 1916

The Squadron was formed at Saint-Omer, France on 10 February 1915 from elements of Nos. 2, 6 and 9 Squadrons. It immediately began fighting in the First World War under Hugh Dowding. For the rest of the Great War, the 'Saints'[1] were deployed throughout Northern France and operated a mixture of aircraft including Bleriot XI, Martinsyde S.1 and Royal Aircraft Factory B.E.2c on offensive patrol and tactical reconnaissance duties.[2] Disbandment occurred on New Year's Eve 1919 followed by reformation at Old Sarum on 1 April 1924. Initially the Bristol Fighter was operated in the tactical reconnaissance role and this was followed by the Atlas and Audax. 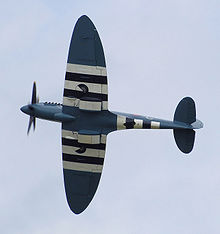 In May 1938 the Lysander arrived[3] and the Squadron continued in its tactical role in wartime France from April 1940.[4] In November 1940 they returned to England and conducted roving sea patrols searching for both downed aircrew and enemy forces.[5] By April 1942, 16 Squadron was re-equipped with the P-51 Mustang and tasked to conduct fighter sweeps and reconnaissance duties over France, the Spitfire Mk V took over this role from January 1943. On 2 June 1943 the Squadron became part of the Strategic Reconnaissance Wing of the 2nd Tactical Air Force as a high-altitude photo reconnaissance unit[6] with Spitfire PR Mk XIs based at Hartford Bridge. In the build-up to D Day, No 16 supplied photographs instrumental to the planning of the Allied landings.[7] Afterwards essential reconnaissance continued to be provided until the end of the war.

Into The Jet Age 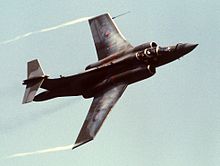 16 Squadron was disbanded at Celle on 1 April 1946 but reformed at RAF Fassberg the same day and took the 24 cylinder Hawker Tempest Mk V on charge until converting to the radial-engined Mk II on 7 June 1946. On 7 December 1948 No. 16 took delivery of its first jet aircraft, the de Havilland Vampire FB.5, which gave way to the de Havilland Venom FB.1 in November 1954 until disbandment at Celle once more on 1 June 1957.

As East-West relations cooled, the Squadron reformed at Laarbruch on 1 March 1958 and would remain there until 1991. 16 Squadron maintained a permanent readiness state, tasked with meeting the Soviet threat, in the expected conventional phase and with the use of tactical nuclear weapons. The Canberra B(I).8 equipped with dual-key nuclear weapons was operated for 14 years but gave way to the Buccaneer S.2B on 16 October 1972. The squadron's twelve Buccaneers were equipped with a variety of conventional weapons and eighteen British WE.177 nuclear bombs.[8] Although Buccaneers could carry two WE.177 weapons, after taking into account attrition in the conventional phase of a high-intensity European war, and after withholding some aircraft in reserve, RAF planners expected that squadron strength remaining would still be sufficient to deliver the nuclear weapons stockpile. The Buccaneer distinguished itself in many bombing exercises, among its victories included winning the Salmond Trophy in 1978 and 1979. The Squadron re-equipped with the Tornado GR.1 in 1984, retaining its role in countering a Soviet threat in Europe with conventional weapons and eighteen WE.177 nuclear bombs. A similar ratio of 1.5 weapons per aircraft as with the Buccaneer.[9]

Ahead of Operation GRANBY in 1990 and the first Gulf War, the squadron deployed to Tabuk airbase. No. 16 was the lead squadron in the deployment with No. 20 and crews from other Tornado GR.1 squadrons. The 'Tabuk Force' used JP233s and 1,000 lb bombs on low-level sorties against Iraqi airfields and other targets. Some of the Squadron's aircraft later formed a TIALD flight that conducted accurate medium-level bombing.[10] Following hostilities, the Squadron disbanded on 11 September 1991 but reformed in November at RAF Lossiemouth as No. 16(R) Squadron, a reserve squadron and an Operational Conversion Unit, replacing and taking over the aircraft and weapons of 226 OCU, training and converting new pilots for the Jaguar. Although no longer a front-line operational squadron, as a reserve, or shadow squadron, its twelve aircraft were equipped with conventional weapons and eight WE.177 nuclear weapons for use in a high-intensity European war, and it remained assigned to SACEUR for that purpose.[11] [12] [13] [14]

Although a non-operational squadron, its pilots were still involved in Operation DENY FLIGHT and Operation NORTHERN WATCH. The Squadron moved to Coltishall in the summer of 2000 but disbanded on 11 March 2005 as the Jaguar approached retirement.[15][16] The Squadron Standard[17] was laid up in Notre-Dame Cathedral Saint-Omer, France on 20 March 2005 where it remains today - once laid up in a place of worship, a Standard can never be removed. 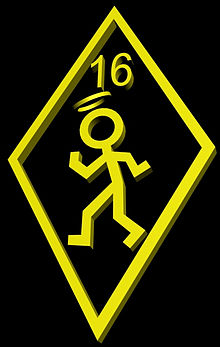 16 Squadron's 'Saint' logo. The nickname stems from the original formation at Saint Omer. In the past, the logo has been painted onto 16 Squadron aircraft and worn as a badge on the flying suits. The badge is presented to student pilots after their first solo sortie.

On 1 October 2008, the Squadron was reformed at RAF Cranwell as part of 22 Group operating the Grob Tutor.[18] 16(Reserve) Squadron continues its training role by instructing new Royal Air Force pilots in Elementary Flying Training (EFT)[19] as part of 1 EFTS. From 2005 to 2008 the unit was previously known as 1 Squadron, 1 EFTS following a restructuring of the RAF's pilot training.[20][21] 16(R) Squadron instructs a third of the RAF's new pilots and some pilots from overseas; the rest are shared between 57(R) Squadron at RAF Wyton and 85(R) Squadron at RAF Church Fenton. The Squadrons' role is to provide pilots to the more advanced flying training courses on their way to earning the coveted pilot wings and joining the front line. In early 2008, Prince William took his first steps on his aviation career at No. 16 Squadron's site flying his first solo sortie in Tutor G-BYXN;[22][23][24] his father was also taught to fly at RAF Cranwell in 1971.[25]

Prior to joining one of the three EFT Squadrons, trainee pilots will have completed Initial Officer Training (IOT) at RAF College Cranwell and are all commissioned officers. Some pilots arrive with no previous military flying experience but others have accrued a number of flying hours during time with a University Air Squadron. Additionally, a number of international pilots are trained to the same standards as RAF pilots. Mainly from the Middle-East, they typically undergo an English language course at York St John University before completing IOT with their RAF colleagues at RAF College Cranwell. Recent international students include pilots from the Air Forces of Iraq,[26] Kuwait, Saudi Arabia and Qatar. 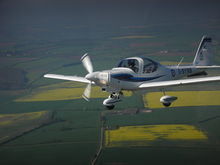 Following an intensive ground school, the EFT course covers the rudiments of flying, stalling and circuits with the pilots flying their first solo after just 10 hours of tuition. They then advance to spinning, aerobatics, instrument flying, formation flying and low level navigation. As the course progresses, emergency handling and airmanship are introduced, this includes simulated engine failures and the use of emergency frequencies. EFT culminates in the Final Handling Test which is a composite sortie comprising any elements taught during the course.

After FHT and approximately 60 hours of flying, successful pilots are selected according to their capability, service need and personal preference to one of the three advanced flying training streams - Fast Jet, Rotary Wing or Multi-Engine. Those selected for Fast Jet training move to RAF Linton-on-Ouse to fly the Tucano with either No. 72 Squadron or No. 207 Squadron, successful pilots then move to RAF Valley to fly the Hawk. Prospective Rotary Wing pilots go to the DHFS to fly the Squirrel and Griffin. Multi-Engine pilots remain at RAF Cranwell and move across the airfield to No. 45 Squadron and fly the Enhanced Avionics Tutor and King Air.