No. 201 Squadron of the Royal Air Force, until March 2010, operated the Nimrod MR2, based at RAF Kinloss, Moray. It is the only squadron affiliated with Guernsey, in the Channel Islands. This affiliation started in 1935 and is commemorated in the museum on Castle Cornet. Its history goes even further back than the RAF itself, being formed originally as No. 1 Squadron RNAS on 17 Oct 1914.

Formation and World War I 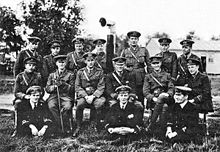 Personnel of No 1 Squadron RNAS in late 1914

Despite its high squadron number, 201 Squadron is one of the oldest squadrons in the RAF. It was formed as No. 1 Squadron of the Royal Naval Air Service (RNAS) on 17 October 1914, and reformed on under that designation on 6 December 1916,[12] only being renumbered to 201 Squadron on the formation of the RAF on 1 April 1918 - all the RNAS squadrons getting new numbers by adding 200 to their original number.[2] It started out as a reconnaissance unit, but was soon flying fighter aircraft. The first aerial VC was won by a member of No. 1 Squadron RNAS when on 7 June 1915 Sub-Lieutenant R.A.J. Warneford shot down Zeppelin LZ.37. After the war the squadron was disbanded at RAF Eastleigh on 31 December 1919.[2][12] Eighteen flying aces served in the squadron during the course of the war, including such notables as Samuel Kinkead, Stanley Wallace Rosevear, Richard Minifie, Roderic Dallas, George Gates, Reginald Brading, Maxwell Findlay, Cyril Ridley, Thomas Gerrard, James Henry Forman, Charles Dawson Booker, Thomas Culling, future Air Vice-Marshal F. H. Maynard, Robert McLaughlin, and Hazel Wallace.[13] 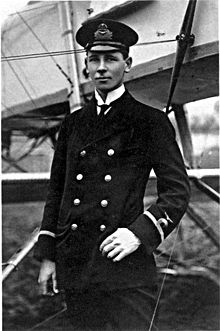 The squadron was reformed at RAF St. Mawgan, when No. 220 Squadron RAF was renumbered to 201 Squadron. The squadron flew the next twelve years with the Avro Shackleton MR.3, a version that used a tricycle undercarriage as opposed to the earlier tailwheel variants. Following the Shackleton's retirement, the squadron converted to Nimrods in October 1970.[2][12][14][15] The squadron was active for over a decade in the Gulf region, in support of both Gulf War 1 and 2 and more recently the conflict in Afghanistan. Until March 2010, the squadron was also on active duty in the UK and maintained continuous 24 hour/365 day search and rescue standby, shared with the sister 120 Squadron, both flying from RAF Kinloss. The Nimrod MR2 was withdrawn in March 2010,[15] and the squadron was formally disbanded on 26 May 2011.[16] It had been preparing to operate the Nimrod MRA4 but this aircraft was cancelled under the 2010 Strategic Defence and Security Review.