No. 666 Squadron was a Royal Air Force Air Observation Post (AOP) squadron associated with the Canadian 1st Army and later part of the Royal Auxiliary Air Force. Numbers 651 to 663 Squadron of the RAF were Air Observation Post units working closely with British Army units in artillery spotting and liaison. A further three of these squadrons, 664–666, were manned with Canadian personnel. Their duties and squadron numbers were transferred to the Army with the formation of the Army Air Corps on 1 September 1957[4][5]

No. 666 Squadron RCAF was first formed on 5 March 1945[1] at RAF Andover as an air observation post (AOP) squadron associated with the Canadian 1st Army. After a period working together with the Canadian army and later with the occupation forces in Germany the squadron disbanded on 30 September 1946.[1][6]

As the number was not transferred to the Canadian authorities, it was revived post-war when the squadron was reformed as No. 666 (Scottish) Squadron RAuxAF, part of the RAuxAF on 1 May 1949 at Scone. Equipped with Auster AOP.6 aircraft, the squadrons headquarter was based at RAF Perth/Scone, with three detached flights, Nos. 1966, 1967 and 1968 Flight RAF[7] at respectively RAF Perth/Scone, RAF Renfrew (later RAF Abbotsinch) and RAF Turnhouse,[1] before it was disbanded on 10 March 1957 by transferring to the Army Air Corps.[8]

The squadron was till 1 April 2009 represented by 666 Squadron of 7 (Volunteer) Regiment, Army Air Corps. 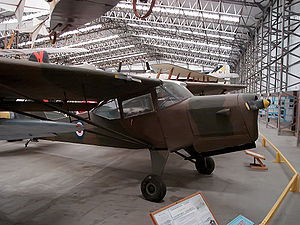 A preserved Auster AOP.6 at the Yorkshire Air Museum.