No. 220 Squadron of the Royal Air Force was originally founded in 1918 and disbanded in 1963 after four separate periods of service. The squadron saw service in both the First and Second World Wars, as a naval patrol unit, and finally as part of Britain's strategic nuclear deterrent.

The squadron was initially founded in September 1918 by merging No. 475, 476 and 477 Flights, and operated on fighter and reconnaissance duties as part of No. 62 Wing. It flew Sopwith Camels during this period. Following the end of hostilities, the squadron was disbanded in December 1918. 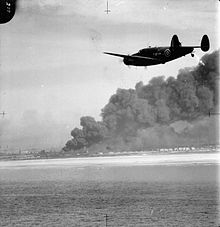 Hudson of 220 Squadron flying reconnaissance over the Dunkirk beaches during the British evacuation (Operation Dynamo), 1940

During the buildup to the Second World War, No. 220 Squadron reformed at RAF Bircham Newton in 1936 as a reconnaissance squadron flying Ansons. With the outbreak of war it flew patrols from RAF Thornaby as part of No. 18 Group, transitioning to Hudsons in November; it flew anti-shipping missions with these in the North Sea from May 1940 onwards. In April 1941, still in the anti-shipping role, it moved to RAF Wick to fly strikes against Norwegian coastal traffic, and began to operate the Fortress in November. In February 1942 it moved to RAF Nutts Corner under No. 15 Group, then to RAF Ballykelly in June; in March 1943 it transferred to RAF Benbecula in the Outer Hebrides. Detachments operated from RAF Bircham Newton, RAF St Eval and RAF Detling in 1940, and from RAF Shallufa in Egypt in early 1942.

In October 1943 the squadron was moved to RAF Lagens, in the Azores Islands, where it came under No. 247 Group and, in December 1944, was re-equipped with Liberators. From 1943 until the end of the war the squadron flew anti-submarine patrols across the South Atlantic.

In June 1945 the squadron returned to the UK as part of Transport Command, and flew troop flights to India from October 1945 to April 1946. After this final service, the squadron was disbanded in May 1946.

In September 1951, the squadron was reformed as part of Coastal Command, based at RAF St Mawgan, equipped with Shackleton aircraft and operating in the maritime reconnaissance role. In 1953 the Squadron aircraft flew in formation in the flypast on the occasion of the Coronation of Queen Elizabeth II. At that time the Shackleton was fitted with a mid upper gun turret, the last RAF operational aircraft so equipped. This Bristol turret with twin 20 mm Hispano cannon was later removed. The squadron was redesignated as No. 201 Squadron in October 1958.

The squadron was again reformed as No. 220 (SM) Squadron RAF[1] in July 1959, equipped with three Thor ballistic missiles, carrying a 1.4 megaton W-49 nuclear warhead, as part of the UK-US strategic deterrent, Project Emily. It was based at RAF North Pickenham in Norfolk until it was disbanded, along with the other Thor squadrons, in 1963.[2]