No. 453 Squadron is a Royal Australian Air Force air traffic control unit. It was first was formed at Bankstown in New South Wales on 23 May 1941 during World War II and was disbanded in March 1942 after suffering heavy losses in combat during the Battle of Malaya. It was re-raised in Britain in June that year and took part in fighting against Nazi Germany in Europe until the end of the war and was disbanded during January 1946. The squadron was reformed in its current role during February 2011. 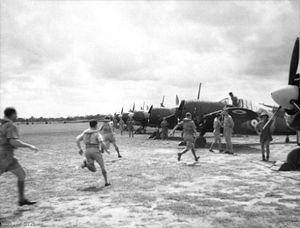 Pilots of No. 453 Squadron RAAF run to their Brewster Buffalo aircraft in response to a scramble order.

The squadron was deployed to Singapore in August 1941, as fears of war with Japan increased. The squadron, along with No. 21 Squadron RAAF, No. 243 Squadron RAF and No. 488 Squadron RNZAF, flew Brewster Buffalo fighters, but the Buffalos supplied to these squadrons proved to be poor in quality. Following the Japanese invasion of Peninsular Malaysia on 8 December 1941, 453 Squadron was deployed to airfields at Ipoh and Kuala Lumpur. The squadron strove to support the ground troops by providing air cover and attacking Japanese troops and transport, but suffered high losses in doing so. The squadron withdrew to Singapore on 24 December with only three working aircraft. In Singapore, 453 Squadron merged with 21 Squadron. 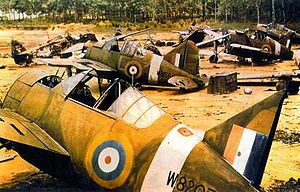 Brewster Buffalo wrecks cannibalized for parts, probably in Singapore circa late January 1942. Two of the Buffalos, serials W8156 and W8207, were operated by 453 Squadron RAAF.

The squadron fought on until 5 February with just six operational Buffaloes, however in spite of many mechanical problems the Buffalo squadrons claimed a 2:1 kill ratio against the Japanese. Later, 453 Squadron was to provide air cover for Admiral Phillip's Force Z (see Sinking of Prince of Wales and Repulse), but a radio message giving the location of the Fleet was only sent out by the Repulse an hour after the first Japanese attack. Flight Lieutenant Tim Vigors from 243 Squadron was acting CO of 453 Squadron while Squadron Leader W. J. Harper was in Australia. He wrote about the loss of the two ships:

"I reckon this must have been the last battle in which the Navy reckoned they could get along without the RAF. A pretty damned costly way of learning. I had worked out a plan with the liaison officer on the Prince of Wales, by which I could keep six aircraft over him all daylight hours within 60 miles of the east coast to a point north of Kota Bharu. This plan was turned down by Admiral Phillips. Had I been allowed to put it into effect, I am sure the ships would not have been sunk. Six fighters could have made one hell of a mess of even 50 or 60 slow and unescorted torpedo-bombers. As we could do nothing else, we kept virtually the whole squadron at readiness at Sembawang while the Fleet was out. I was actually sitting in my cockpit when the signal eventually reached us that the Fleet was being attacked. Phillips had known that he was being shadowed the night before, and also at dawn that day. He did not call for air support. He was attacked and still did not call for help. Eventually it was the captain of Repulse who called for air support just before his ship sunk" [8]

When 453 Squadron arrived in Java it could not again be made operational. It was ordered back to Australia, and was disbanded at Adelaide on 15 March 1942. 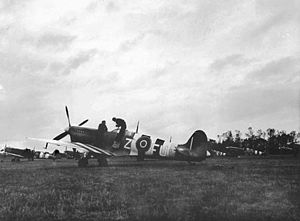 No. 453 Squadron aircraft at an airfield in Normandy in 1944. Note the invasion stripes painted on the aircraft.

See also: Australian contribution to the Battle of Normandy

The squadron was reformed from Australian personnel in the UK at RAF Drem, near Edinburgh, in Scotland on 18 June 1942. The squadron was equipped with Supermarine Spitfire aircraft, and joined the RAF Fighter Command. The squadron provided defensive air patrols over Britain and surrounding waters, escorted bombers over enemy-controlled Europe, and conducted offensive strikes in its own right attacking targets on both land and sea. After the invasion of Western Europe the squadron began operations over enemy territory. From November 1944 to March 1945, 453 Squadron was heavily engaged in striking at assembly and launch sites used by the Germans in their V2 rocket attacks against Britain. On 2 May 1945, the squadron escorted the aircraft that returned Queen Wilhelmina to The Netherlands after three years in exile. This was 453 Squadron's last mission of the war. After the war it was planned that the squadron would form a long-term Australian presence among the occupation forces but sufficient volunteers could not be found to make this a viable proposition. Thus, on 21 January 1946 the squadron disbanded.

During the war the squadron suffered 29 (28 Australian) fatalities.