No. 20 (R) Squadron of the Royal Air Force was until March 2010, the OCU (Operational Conversion Unit) for the BAE Harrier GR9, and T12, operating from RAF Wittering. A reserve squadron, it could be called upon for combat duties if necessary.[1]

In the First World War 20 Squadron RFC & RAF was arguably the highest scoring and possibly most decorated British fighter squadron on the Western Front with 613 combat victories, a posthumous Victoria Cross won by Thomas Mottershead, four Distinguished Conduct Medals, and over sixty Military Crosses and Military Medals awarded to its members. Its ranks included over two score flying aces.

The squadron transferred from the former Royal Flying Corps to the newly formed Royal Air Force in April, 1918.

Post World War I, 20 Sqn was transferred to the North-West Frontier Province for policing duties, equipped with Bristol Fighters, Wapitis and Audaxes. 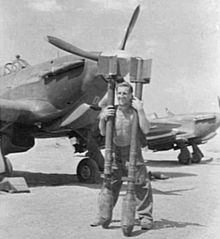 At the outbreak of World War II, the squadron was still equipped with Audaxes, which were replaced with Lysanders in December 1941, re-equipping with Hurricanes in March 1943. During the Second World War the squadron's Hawker Hurricane IIDs and IVs saw action against the Japanese.

After the war, the squadron re-equipped with Spitfires in September 1945, and Tempest FBIIs in May 1946, retaining these until it disbanded on 1 August 1947, whilst based in India.

20 Squadron reformed at Llanbedr on 11 February 1947 as an Anti-aircraft Co-operation (AAC) squadron, moving to Valley on 19 July 1949, equipped with many miscellaneous aircraft. The squadron disbanded at Valley on 16 September 1951.

In 1977 at RAF Bruggen the squadron re-equipped with twelve SEPECAT Jaguar strike aircraft, various weapons for the squadron's conventional strike role of support for ground forces in repelling a Soviet attack in Europe, and eight WE.177 tactical nuclear bombs for use if a conflict escalated to the nuclear phase. The apparent mismatch between eight nuclear bombs and twelve aircraft was because RAF staff planners expected up to one third attrition in the conventional phase, with sufficient aircraft held back in reserve to deliver the full stock of nuclear weapons to targets beyond the forward edge of the battlefield, deep into the enemy's rear areas. The squadron was assigned to SACEUR for operational and targeting purposes, although political control over release of the British-owned WE.177 weapons was retained by the British government in London.[2]

The squadron re-equipped again with twelve Tornado GR1 aircraft at RAF Laarbruch in 1984, while its stock of WE.177 weapons increased to eighteen because of the Tornado's greater capacity. The squadron's war-role and assignment to SACEUR remained unchanged.[3][4]

In May 1992 the Options for Change defence review called for the disbanding of 20 Squadron as a front line unit, and it disbanded on 31 July 1992. On 1 September 1992 the squadron numberplate was assigned to the Harrier Operational Conversion Unit as No. 20 (Reserve) Squadron.

With the formation of Joint Force Harrier and the decision to withdraw the FAA's Sea Harriers, the personnel of the RAF's No. 1 and 4 Squadrons, and the RN's 800 Naval Air Squadron and 801 Naval Air Squadron, later known as Naval Strike Wing, were absorbed with 20(R) Squadron into a joint RAF/RN unit, manned 50/50 by each service.

On 9 February 2009, a 20(R) Squadron Harrier T12, ZH656, crashed at RAF Akrotiri while on training operations there. Both crew ejected safely and were treated in hospital for minor injuries.[5]