No. 607 (County of Durham) Squadron was a squadron of the Royal Air Force. It was formed in 1930 as a bomber unit in the Auxiliary Air Force and changed in 1936 to the fighter role. It fought in that role during World War II on the European front and in Asia. After the war the squadron reformed as a fighter unit of the Royal Auxiliary Air Force, disbanding with all the other flying units of the RAuxAF on 10 March 1957.

No. 607 Squadron was formed on 17 March 1930 at the then new airfield of RAF Usworth, County Durham[6] as a day bomber unit of the Auxiliary Air Force (AuxAF).[1] They became operational in the summer of 1933, having received their first aircraft in December 1932, flying Westland Wapitis. First Commanding Officer was Walter Leslie Runciman (later the 2nd Viscount Runciman of Doxford). In September 1936 the squadron was re-equipped with Hawker Demons and the squadron was told that the role of the squadron was changed into that of a fighter squadron. For that role it later received Gloster Gladiators, which arrived in December 1938. The squadron took these to France, being part of the Air Component of the BEF in November 1939.

The squadron operated during the early part of World War II from various locations in France, including Saint-Inglevert. It was active as a fighter squadron during the Battle of France and the Battle of Britain. By this time the squadron was equipped with Hawker Hurricanes, which had arrived from March 1940. The squadron moved to RAF Manston in October 1941 and remained there until going to India in 1942. There it joined No. 166 Wing RAF on 25 May 1942, still equipped with Hurricanes. These were replaced with Supermarine Spitfires in September 1943, making the squadron the first unit in SEAC to operate this aircraft. It re-equipped with the Spitfire Mk.VIII in March 1944, and flew these until disbanding on 19 August 1945 at Mingaladon, Burma.

On 10 May 1946 No. 607 Squadron reformed at RAF Ouston as a day fighter squadron of the Royal Auxiliary Air Force. After flying Spitfire F.14 and F.22s for five years, it converted to De Havilland Vampires, flying these until February 1957 when, along with all the other flying units of the RAuxAF, it was disbanded on 10 March 1957.[7]

607 Squadron is now the squadron number used by the Air Cadet Squadron based at Seaburn near Sunderland. 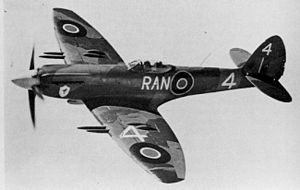