No. 230 Squadron is an RAF squadron, currently based at RAF Benson. The squadron was part of Royal Air Force Germany, operating the Puma HC.1 there from 1980. Following the drawdown at the end of the Cold War, the squadron disbanded on 30 April 1992. This was short-lived however and the squadron reformed at RAF Aldergrove on 4 May 1992, again with the Puma HC.1.

The squadron is well experienced in night flying, almost a third of flights are undertaken after dark. The 2004 Future Capabilities chapter of the UK Defence White Paper, Delivering Security in a Changing World announced a plan to reduce the squadrons Puma force by 6 helicopters. It was announced in late 2008 that the squadron was to move to RAF Benson by 2010.[11]

No. 230 Squadron was formed on 20 August 1918 at Felixstowe, consisting of three Flights. No.327 and 328 Flight used Felixstowe F.2 and F.2A flying boats and Fairey IIIs for maritime reconnaissance, whilst No.487 Flight flew Sopwith Camels on escort duties. At the end of World War I the squadron was retained as one of the few RAF coastal units. In 1920 the squadron got Felixstowe F.5 flying boats, and it moved to RAF Calshot in May 1922, where on 1 April 1923 it was renumbered to 480 Flight RAF.

On 1 December 1934 No. 230 Squadron was reformed at RAF Pembroke Dock with Short Singapore flying boats. The Squadron used the Singapore till 1938, serving from Aboukir, Alexandria, Lake Timsah and after a short return to the UK, RAF Seletar. In 22 June 1938 the first Short Sunderland flying boat arrived,[12] the aircraft the Squadron would be equipped with for the next 20 years, in fact until 28 February 1957 when the Squadron was disbanded at Pembroke Dock.[13]

On 1 September 1958 No. 215 Squadron RAF at Dishforth was renumbered 230 Squadron, flying Scottish Aviation Pioneer light transport aircraft. From 1960 these were augmented with Scottish Aviation Twin Pioneer aircraft. Westland Whirlwind HC.10 helicopters began to arrive in June 1962 to become the Squadron's standard equipment. In January 1963 No.230 Squadron moved to Germany, returning to the UK in January 1965 before being transferred to Borneo. In 1967 to Squadron returned to the UK and in November 1971 began to convert to the Aérospatiale Puma HC.1

230 sqn was one of two Northern Ireland based squadrons of the Royal Air Force. Alongside 72 Squadron, operating 18 Pumas, these aircraft are rotated with No. 33 Squadron's 15 Pumas to even out flight hours amongst the fleet (Northern Ireland based helicopters had a much higher operational tempo). In 230 Sqn service the main role of the fleet was tactical transport of the Security Forces, including the Police Service of Northern Ireland and the British Army, either to patrol points or one of the military bases dotted around Northern Ireland. A well travelled route for the Pumas, as well as visiting Chinooks is to the Royal Irish Regiment camp at Ballykinler, South Down.

On 17 Nov 2009, 230 Squadron eventually left Northern Ireland for RAF Benson in Oxfordshire after 17 years in province.[14] 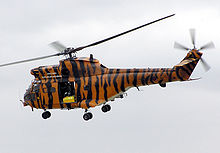 A Westland Puma of 230 Squadron