No. 664 Squadron was a Royal Air Force Air Observation Post squadron associated with the Canadian 1st Army and later part of the Royal Auxiliary Air Force. Numbers 651 to 663 Squadrons of the RAF were Air Observation Post units working closely with Army units in artillery spotting and liaison. A further three of these squadrons, 664-666, were manned with Canadian personnel. Their duties and squadron numbers were transferred to the Army with the formation of the Army Air Corps on 1 September 1957.[6][7]

No. 664 Squadron was formed on 9 December 1944 at RAF Andover as an air observation post (AOP) squadron associated with the Canadian 1st Army. The pilots were officers recruited from the Royal Canadian Artillery and trained to fly at 22 E.F.T.S. Cambridge, further developing advanced flying skills at 43 Operational Training Unit RAF (43 OTU), RAF Andover. The first Commanding Officer was Major Dave Ely, RCA; the operational Commanding Officer was Major D.W. Blyth, RCA. In England the squadron operated under the overall control of No. 70 Group, RAF Fighter Command; prior to deployment to the European continent, the squadron was transferred to No. 84 Group, Second Tactical Air Force (2 TAF). In January 1945, the squadron was deployed to RAF Penshurst, deploying to the Netherlands in March 1945.[8] The squadron flew its first operational sortie over the enemy front in Holland on 22 March 1945. The principal aircraft flown in action was the Taylorcraft Auster Mk. IV and V. After V-E Day on 8 May 1945, the squadron was tasked with flying mail and passengers for 1st Canadian Army. The squadron continued flying like duties for the Canadian Army Occupation Force (CAOF) until the spring of 1946. 664 (AOP) Squadron, RCAF, was disbanded on 31 May 1946 at Rostrup, Denmark.[1][9] Although the squadron's trained aircrew observers performed yeoman service in aerial action against the enemy, aircrew associations across Canada did not grant membership to AOP observers, as those aircrew were not officially issued with cloth wings during the war[10]

The original squadron is represented today by 664 Squadron of 4 Regiment, Army Air Corps 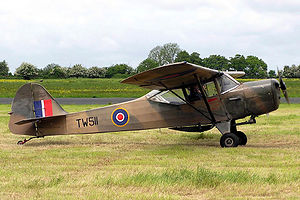