No. 54(R) Squadron (sometimes written as No. LIV Squadron) is a squadron of the Royal Air Force. It is a reserve squadron based at RAF Waddington, England.[2] On 1 September 2005 it took on the role of Intelligence, Surveillance and Reconnaissance (ISR) Operational Conversion Unit, responsible for training all RAF crews assigned to the E-3D Sentry AEW1 and the Nimrod R1 and the Sentinel R1 as well as running the Qualified Weapons Instructor Intelligence, Surveillance and Reconnaissance Course (QWI ISR). The squadron was previously a SEPECAT Jaguar strike fighter unit, operating from RAF Coltishall, until it was disbanded on 11 March 2005. Since September 2005 the unit has been formally titled 54(Reserve) Squadron.[3] 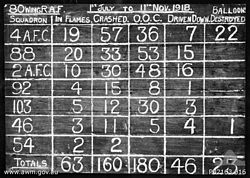 Serny, France, November 1918. A score board recording the claims for enemy aircraft destroyed by No. 80 Wing RAF from July–November 1918, including 54 Squadron

No. 54 Squadron was formed at Castle Bromwich on 5 May 1916. Like many others formed at the same time, was tasked with Home Defence duties flying BE2Cs and Avro 504s. Four months later, however, it re-equipped with Sopwith Pups, being the first Royal Flying Corps Squadron to operate the Pup. It moved to France as a day fighter squadron in December 1916. It was initially used as for bomber escort, claiming its first kill, an Albatros D.III, in April 1917, but specialised in attacking enemy observation balloons during the Battle of Arras.[4][5]

The Pup soon became outclassed in air combat, however, and No. 54 concentrated on ground attack missions until it could re-equip with Sopwith Camels in December 1917, allowing to to return to fighter duties, providing protection for Army co-operation squadrons. The German Spring Offensive saw a return to low level attack missions, carrying out both ground attack and fighter missions until the end of the War. In February 1919, the Squadron returned to RAF Yatesbury, reduced to cadre status and was disbanded on 25 October 1919.[5][6]

The Squadron was reformed at RAF Hornchurch on 15 January 1930 as a fighter squadron equipped initially with dual-control Siskin Trainers until Bristol Bulldog fighters were received in April that year.[7] The squadron had a brief stay at RAF Upavon in 1931, prior to returning to RAF Hornchurch.[8] The Bulldogs were replaced by Gloster Gauntlets, in September 1936 and Gladiators in April 1937, before the Squadron's first monoplane, the Supermarine Spitfire, arrived in March 1939.[9] 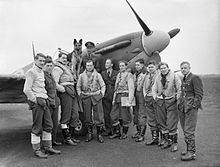 Pilots of 54 Squadron, May 1941 gathered round a Supermarine Spitfire Mark IIA Rochford, Kent. On the wing sits their Commanding Officer, Squadron Leader, R F Boyd, with the squadron mascot "Crash". Boyd had at this time destroyed 14 enemy aircraft. At the end of July 1941, he was promoted wing leader of the Kenley Wing, and by the end of his tour in the summer of 1942 had increased his score to at least 22.5.

The early days of World War II were spent patrolling the Kent coast until, in May 1940, the unit provided air cover for the evacuation of Dunkirk, claiming 31 aircraft shot down for the loss of 4 pilots and seven Spitfires.[9]

From July, the Squadron was heavily engaged in the Battle of Britain, often using RAF Manston as a forward operating base. The fighting was intense, and losses were heavy, with the Squadron being withdrawn to RAF Catterick on 2 September 1940.[10][11] One notable pilot during the first year of the year was "Al" Deere, who claimed 11 German aircraft shot down,[12] while himself being shot down 7 times.[13]

No. 54 Squadron returned to Hornchurch in February 1941, [14] flying fighter sweeps and bomber escort missions over Northern France until November 1941, when it moved north to RAF Castletown, Caithness, undertaking coastal patrols over the Pentland Firth. In June 1942, the squadron was moved to RAF Wellingore, to prepare for moving to Australia.[15]

In mid-1942, the squadron left for Australia. In January, 1943, it joined No. 1 Wing (Spitfire Wing) of the Royal Australian Air Force, a Spitfire unit responsible for air defence duties against Japanese aircraft in the Darwin area. Initially, the wing as a whole suffered from the inexperience of its pilots and mechanical problems caused during the shipment of Spitfires. Although contact with the Japanese was generally brief, 54 Squadron pilots scored a number of kills. Following the end of the war, the squadron disbanded in Melbourne on 31 October 1945.

On 15 November 1946 No. 183 Squadron RAF, a Hawker Tempest ground-attack unit based at RAF Chilbolton near Oxford, was renumbered to No. 54 Squadron and spent a year training pilots destined for overseas service before receiving Vampires and moving to RAF Odiham a year later. 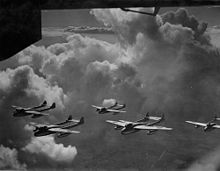 In 1948, six Vampires from the Squadron made history when they completed the first crossing of the Atlantic by jet aircraft. Flying in 3 legs with over 8 hours in the air and accompanied by ground crew in Avro Yorks[16] Following a three year stint with Meteors, which arrived in April 1952, Hunters arrived in March 1955, and the Squadron took up ground-attack duties as part of No 38 Group, frequently deploying to trouble spots around the world as part of the Group's Offensive Strike Wing.

No 54 Squadron was the first jet RAF formation team to trail smoke with a team of six Vampires.[17] In 1955, No 54 Squadron flew a formation of four Hawker Hunter F1 aircraft. The following year the Squadron team adopted the name The Black Knights - the pilots wore black flying suits. The squadron relocated to RAF Stradishall in July 1959 and to RAF West Raynham in 1963.

The squadron was briefly disbanded on 1 September 1969, however was reformed the same day after being re-equipped with McDonnell-Douglas Phantoms at RAF Coningsby in 1969.

By 1974 when twelve SEPECAT Jaguar aircraft were delivered the squadron had re-located to RAF Coltishall. From 1975[18] until at least 1994[19] (the last year for which data is available) the squadron's wartime role was as an operational squadron in the front line assigned to SACEUR with twelve Jaguar aircraft, eight WE.177 tactical nuclear bombs, and a variety of conventional weapons. In a high-intensity European war the unit's role was to support land forces on the Continent resisting an assault by the Red Army on Western Europe, first with conventional weapons and secondly with tactical nuclear weapons, should a conflict escalate to that stage, by striking beyond the forward edge of the battlefield into enemy-held areas. The apparent mismatch between aircraft numbers and nuclear bombs was a consequence of RAF staff planners concluding that with some aircraft held back from the conventional phase as a reserve, there would be one-third attrition of aircraft, leaving the remaining survivors numerically strong enough to deliver the squadron's entire stockpile of eight nuclear bombs.[20]

The squadron, its role and aircraft have remained almost the same till 2005, albeit at a different base RAF Coltishall, updated Jaguar aircraft (GR.3), and retirement of the WE.177 nuclear weapon 1994-98.

With the move to a more expeditionary footing, the squadron has seen a number of operational deployments in recent years including Northern Iraq flying from Incirlik air force base in Turkey and the Balkans flying from Goioa del Colle in Italy 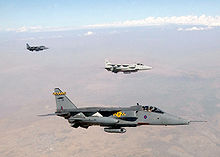 With the decision taken to run the Jaguar fleet down in anticipation of the arrival of its replacement, the Typhoon, No 54 Squadron was disbanded at RAF Coltishall on 11 March 2005. The Squadron Standard is now housed in Norwich Cathedral.

Reformed as No. 54 (Reserve) Squadron at RAF Waddington on 1 September 2005 it re-roled as the Intelligence, Surveillance and Reconnaissance (ISR) Operational Conversion Unit, responsible for training all mission crews for the E-3D Sentry AEW1, the Nimrod R1 and the Sentinel R.1. The unit is also responsible for the delivery of the Qualified Weapons Instructor Course for ISR (QWI ISR).[21]