No. 617 Squadron is a Royal Air Force aircraft squadron based at RAF Lossiemouth in Scotland. It currently operates the Tornado GR4 in the ground attack and reconnaissance role. It is commonly known as the "Dambusters", for its actions during Operation Chastise against German dams during World War II.

According to the squadron's entry in Flying units of the RAF by Alan Lake, 617 were allocated the unit identification code MZ for the period April to September 1939, even though the unit didn't actually exist at the time.

The squadron was formed at RAF Scampton during World War II on 21 March 1943. It included Royal Canadian Air Force, Royal Australian Air Force and Royal New Zealand Air Force personnel. The squadron was formed for the specific task of attacking three major dams on the Ruhr in Germany: the Möhne, Eder and Sorpe. The plan was given the codename Operation Chastise and was carried out on 17 May 1943. The squadron had to develop the tactics to deploy Barnes Wallis's "Bouncing bomb".

The Squadron's badge, approved by King George VI, depicts the bursting of a dam in commemoration of Chastise. The squadron's chosen motto was "Après moi le Deluge" ("After me, the Flood"), a humorous double entendre on the supposed last words of King Louis XV of France. The original commander of 617 Squadron, Wing Commander Guy Gibson, was awarded the Victoria Cross for his part in the raid. Guy Gibson also owned a black Labrador named Nigger, who was the mascot of the squadron for some time.

After the raid, Gibson was withdrawn from flying (due to the high number of raids he had been on) and went on a publicity tour. George Holden became Commanding Officer (CO) in July, but he was shot down and killed on his fourth mission with the squadron in September 1943, an attack on the Dortmund-Ems Canal; he had four of Gibson's crew with him. H. B. "Mick" Martin took command temporarily, before Leonard Cheshire took over as CO. Cheshire personally took part in the special target marking techniques required which went far beyond the precision delivered by the standard Pathfinder units — by the end he was marking the targets from a Mustang fighter. He was awarded the VC.

On the 15 July 1943 twelve aircraft of this Squadron took off from Scampton to attack targets in Northern Italy. All aircraft attacked and proceeded to North Africa without loss. The targets were San Polo D'Enza and Aquata Scrivia power stations which it hoped would delay German troops who were travelling down into Italy on the electrified railway system to support the Italian front. The operation met little opposition but the targets were obscured by valley haze and they were not destroyed. The 12 crews returned to Scampton on the 25 July from North Africa after bombing Leghorn docks on the return journey. The raid on Leghorn docks was not a great success due to mist shrouding the target. On the 29 July 1943 nine aircraft took off from Scampton to drop leaflets on Milan, Bologna, Genoa and Turin in Italy. All aircraft completed the mission and landed safely in Blida North Africa. 7 of the aircraft returned to Scampton on the 1 August, one on the 5th and the last on the 8th.

Throughout the rest of the war, the Squadron continued the specialist and precision bombing role, including the use of the enormous "Tallboy" and "Grand Slam" ground-penetrating earthquake bombs, on targets such as concrete U-boat shelters and bridges and the Dortmund-Ems Canal was finally breached with Tallboys in September 1944.

A particularly notable attack was the sinking of the Tirpitz. Tirpitz had been moved into a fjord in northern Norway where she threatened the Arctic convoys and was too far north to be attacked by air from the UK. She had already been damaged by an attack by Royal Navy midget submarines and a series of attacks from carrier-borne aircraft of the Fleet Air Arm, but both attacks had failed to sink her. The task was given to No. 9 and No. 617 Squadrons, who operated from a staging base in Russia to attack Tirpitz with Tallboy bombs. They damaged her so extensively that she was forced to head south to Tromsø fjord to be repaired. This fjord was in range of bombers operating from Scotland and from there, in October, she was attacked again, but cloud cover thwarted the attack. Finally on 12 November 1944, the two squadrons attacked Tirpitz. The first bombs missed their target, but following aircraft scored three direct hits in quick succession. Within ten minutes of the first bomb hitting the Tirpitz she turned turtle. Both squadrons claim that it was their bombs that actually sank the Tirpitz. All three RAF attacks on Tirpitz were led by Wing Commander J. B. "Willy" Tait, who had succeeded Cheshire as CO of No. 617 Squadron in July 1944.[1] Among those pilots participating in the raids was Flight Lieutenant John Leavitt, an American who piloted one of the 31 Lancasters. Leavitt's plane dropped one of the bombs that hit the Tirpitz dead centre.[2]

The squadron carried out 1,599 operational sorties with the loss of 32 aircraft.[3]

The World War II exploits of the squadron and Chastise in particular, were described in Paul Brickhill's 1951 book The Dam Busters and a 1954 film, though the accuracy and completeness of this account was compromised by many of the documents relating to the war years, still being secured by the Official Secrets legislation.

The definitive work however is considered "The Dambusters Raid" by John Sweetman.[4] It is based on careful research and cross checking of original documents as well as interviews with survivors of the raid.

In 2006, it was announced that New Zealand film director Peter Jackson and David Frost would co-produce a re-make of the film. It has been scripted by Stephen Fry and will be directed by Christian Rivers. The last living Dam Buster pilot, New Zealander Les Munro, offered his services as a technical adviser.[5]

In 2010 documents from the national archives were released that detail plans made in early July 1943 for a second major mission for 617 squadron that would have taken place in July or August, just months after the Dam-buster raids. The plan was for the squadron to fly another extremely low level operation, this time over Rome and to assassinate Benito Mussolini by bombing his headquarters and his residence. The plan was devised by Air Marshal Harris and had the backing of Anthony Eden, the foreign secretary. In a memorandum to the Prime Minister, Winston Churchill, dated 13 July 1943, Eden wrote: "Harris has asked permission to try to bomb Mussolini in his office in Rome and to bomb his residence simultaneously in case the Duce is late that morning. Eden reported that Mussolini's headquarters, the magnificent Palazzo Venezia in central Rome and his private residence, Villa Torlonia, were both "unmistakeable" and could easily be identified by British bombers. Importantly, neither was within 1,500 yards of the Vatican, which the Allies had promised not to damage. "I suggest that if Mussolini were killed or even badly shaken, at the present time this might greatly increase our chance of knocking Italy out (of the war) at an early date. And I therefore ask your permission to lay the operation on," Eden wrote. But within two weeks, Mussolini was ousted by the Grand Council of Fascism and replaced by a caretaker government led by King Vittorio Emmanuele III and Pietro Badoglio, who negotiated a surrender to the Allies. 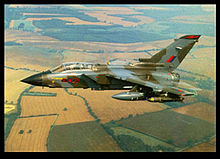 After the end of World War II, the squadron was given the Avro Lincoln, following those in 1952 with the English Electric Canberra jet bomber. The squadron was deployed to Malaya for four months in 1955, returning to RAF Binbrook to be disbanded on 15 December 1955.

Reformed at RAF Scampton on 1 May 1958 as part of RAF Bomber Command's V-bomber force maintaining the UK's strategic nuclear deterrent, the squadron was equipped with the Avro Vulcan B1 from Aug 1960.[6] By 23 May 1961 its aircraft were the upgraded Vulcan B1A[7] fitted with the ECM tailpod. The squadron's assigned role was high-level strategic bombing with a variety of free fall nuclear bombs. Both the B1 and B1A types were equipped with various free-fall nuclear weapons. These may have included Blue Danube, Red Beard, Violet Club the Interim Megaton Weapon, Yellow Sun Mk.1 and certainly Yellow Sun Mk2. American bombs were also supplied to the RAF V-bombers for a short period under the Project E arrangements.[8]

The squadron began almost immediately to upgrade yet again to the Vulcan B2, taking delivery of the first on 1 September 1961,[9] although its high-level strategic bombing role remained unchanged until the advent of effective Soviet Surface-to-Air Missiles forced Bomber Command to re-assign V-bombers from high-altitude operations to low-level penetration operations in March 1963, when the squadron's Vulcans adopted a mission profile that included a 'pop-up' manoeuvre from 500-1,000 ft[10] to above 12,000 ft for safe release of Blue Steel.

The squadron's Vulcans were configured for the Blue Steel stand-off bomb and 617 Squadron was the first to be declared operational with it in August 1962.[11] until in January 1970 the squadron's eight Vulcan B2 aircraft were re-equipped with the new strategic laydown bomb, WE.177B [12] which improved aircraft survivability by enabling aircraft to remain at low-level during weapon release.[13][14]

Following the transfer of responsibility for the nuclear deterrent to the Royal Navy the squadron was re-assigned to SACEUR for tactical strike missions. In a high-intensity European war the squadron's role was to support land forces on the Continent by striking deep into enemy-held areas beyond the forward edge of the battlefield, striking at enemy concentrations and infrastructure, with WE.177 tactical nuclear weapons, should a conflict escalate to that stage. The squadron's eight aircraft were allocated eight WE.177 nuclear bombs and as the Vulcan bomb bay was configured to carry only one and assuming that RAF staff planners had factored in their usual allowance for attrition in the early conventional phase of a Continental war, leaving sufficient surviving aircraft to deliver the full stockpile of nuclear weapons, it is a reasonable conclusion that the Vulcan force was held in reserve for nuclear strike duties only. The squadron's Vulcan B2s served mainly in that low-level penetration role until disbandment on 31 December 1981[15]

The squadron reformed on 1 January 1983 at RAF Marham re-equipped with twelve Tornado GR1 aircraft and eighteen WE.177 nuclear bombs,[16] and the squadron's role assigned to SACEUR remained one of support for land forces on the Continent. Their Tornado aircraft were each able to carry two WE.177 bombs and the ratio of weapons to aircraft at full strength increased to 1.5 : 1, with an allowance now made for attrition in the conventional opening phase of a Continental war. The squadron continued in this role until the WE.177 weapons were retired and No. 617 Squadron relinquished its nuclear delivery capability.[17]

In 1993 the squadron began the changeover to anti-shipping and by 1994 was operating from RAF Lossiemouth assigned to SACLANT with the Tornado GR4B with the Sea Eagle missile. 617 Sqn also routinely deployed in support Operation Resinate and Operation Bolton, the RAF contribution to Operation Southern Watch, the last time being in the spring and summer of 2000 to Ali Al Salem Air Base, Kuwait.

617 Sqn continued its pioneering heritage by becoming the first RAF squadron to fire the MBDA Storm Shadow cruise-missile, during the 2003 invasion of Iraq. In 2011 the squadron's commanding officer is Wing Commander Keith Taylor who recently replaced Wing Commander David Cooper, since promoted to Group Captain and appointed to HQ Air Command.[citation needed]