No. 36 Squadron of the Royal Flying Corps (later as Royal Air Force) was formed at Cramlington on February 1, 1916 and was disbanded for the last time in 1975.

No. 36 Squadron Royal Flying Corps was first formed on 18 March 1916 at Cramlington, Northumberland as a Home Defence squadron, defending the coastline between Newcastle upon Tyne and Whitby against German Zeppelin attacks.[1] On 17 November 1916, Second Lieutenant I.V. Pyott, flying a Royal Aircraft Factory B.E.2c destroyed Zeppelin L.34 over Hartlepool,[2][3] for which he was awarded the Distinguished Service Order.[4] Once Zeppelin attacks on the North of England stopped, the Squadron switched to training duties, becoming part of the Royal Air Force on 1 April 1918, disbanding on 13 June 1919.[1][5]

On 1 October 1928, No. 36 Squadron was reformed by redesignating the Coast Defence Torpedo Flight, based at Donibristle in Scotland and flying Hawker Horsleys.[1] It was sent to Singapore to strengthen its defences against naval attack, with its aircraft reaching its destination on 17 December 1930.[6] As well as practicing torpedo attacks and working with the Royal Navy, 36 Squadron was deployed to Rangoon in response to a rebellion in Burma, carrying out bombing raids against the insurgents.[7][8] The squadron was re-equipped with Vickers Vildebeests in July 1935, continuing as a torpedo bomber squadron operating from Singapore.[1] 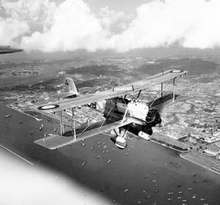 Vickers Vildebeest Mk III of No. 36 Squadron in flight over Singapore. 22 September 1936

36 Squadron, along with No. 100 Squadron RAF retained the obsolete biplane when Japan invaded Malaya, and flew an unsuccessful attack against the Japanese cruiser Sendai during the Battle of Kota Bharu on 8 December 1941.[9] It continued operating against the Japanese, its Vildebeests being supplemented by five ex-Fleet Air Arm Fairey Albacores.[10] Where possible it operated by night, bombing Japanese-held airfields and troops.[11]

On 26 January 1942, Japanese forces landed at Endau, on the east coast of Malaya, 150 miles from Singapore. To oppose this landing, nine Vildebeests of No. 100 Squadron and three of 36 Squadron, together with nine Australian Lockheed Hudsons, set off at 1:00 pm (having flown against land targets the night before), and despite a fighter escort five Vildebeests were shot down. 36 and 100 Squadrons repeated the attack two hours later with nine Vildebeests (with two from 100 Squadron[12]) and three Albacores. This time the fighter escort was late, only finding the bomber force once it had been engaged by Japanese Nakajima Ki-27 fighters, with a further five Vildebeests and two Albacores shot down, and a further two more damaged so badly that they were written off.[13][14][15][16] These losses, which included the commanding officers of both Squadrons could not be sustained, and the remnants of the two squadrons were evacuated to Java on 31 January, being merged into a single unit. On 28 February, nine Videbeests attacked a Japanese convoy off Rembang in Northern Java, claiming eight ships sunk but losing another commanding officer. It ceased to exist on 7 March 1942 after its last two Vildebeests ditched off Sumatra while attempting to evacuate to Ceylon.[1][13][17][18]

36 Squadron reformed at Thanjavur in India on 22 October 1942, although it did not receive any aircraft until December that year when it was equipped with Vickers Wellington bombers for anti-submarine patrols off Madras. It flew its first convoy escort mission on 13 January 1943.[19][1]

It moved to Algeria in June 1943. One tactic used against German U-boats in the Mediterranean was known as "Swamp", the area around a sighting would be saturated with aircraft, keeping the submarine submerged and stopping it from charging its batteries. An example of this took place on 14–17 May 1944, when Leigh Light equipped Wellingtons of 36 Squadron made several attacks on RAF Chivenor in September 1944, continuing in the anti-submarine role. It disbanded at RAF Benbecula on 4 June 1945.[1][5]

On 1 October 1946, the squadron was reformed at Thorney Island by renumbering No. 248 Squadron, flying De Havilland Mosquitos, being disbanded again on 15 October 1947. The squadron was again reformed on 1 July 1953 as a maritime reconnaissance unit at RAF Topcliffe, flying Lockheed Neptunes until 28 February 1957. The following year, on 1 September, the squadron re-emerged at RAF Colerne as a transport squadron, flying the Handley Page Hastings previously operated by No. 511 Squadron RAF, and concentrating on tactical transport operations.[21] In August 1967 the squadron relocated to RAF Lyneham, replacing the Hastings were replaced by Lockheed Hercules. It was disbanded again on 3 November 1975.[1][5]

Source - The Squadrons of the Royal Air Force[22] unless stated