No. 106 Squadron RAF was a Royal Flying Corps and Royal Air Force squadron active from 1917 until 1919. It was also operative during World War II and in the post war period until 1963.

Formed as No 106 Squadron, RFC, at Andover, Hampshire, on 30 September 1917. It was initially intended to be a corps reconnaisaance squadron but after training in May 1918 it was not sent to the Western Front but to Ireland to help with the developing troubles there. It served in Army co-operation and policing roles for 18 months before being disbanded at Fermoy, on 8 October 1919. The squadron next appeared in June 1938, when it was re-formed as No 106 (Bomber) Squadron.[2]

The squadron reformed in 1 June 1938 at Abingdon from a nucleus provided by a flight from No. 15 Squadron. Initially equipped with Hinds, it began to receive Battles the following month but these actually left the squadron before the Hinds, in June 1939 due to the fact the squadron was to be a No 5 Group unit and this group was to be equipped with Hampdens, which began to arrive in May 1939 together with Ansons to assist in the conversion process.[2]

At the outbreak of the Second World War the squadron was flying Hampdens with No. 5 Group in a training role which continued up until 1 March 1941 when it reverted to front-line status and began regular night bombing operations against Fortress Europe, flying its first bombing raid on raid on Cologne, although it had taking part in some mine laying prior to that.[2]

After a short spell in early 1942 with Manchesters, from May 1942 No 106 started replacing them with Lancasters [2] (but it did not become converted completely to Lancasters before some of the squadron's Manchesters had participated in the 1,000-bomber raids on Cologne, Essen and Bremen). In October it contributed 10 Lancasters to No. 5 Group's low level epic dusk raid ("Operation Robinson") on Le Creusot and two more (one of them piloted by Wing Commander Guy Gibson who was then No 106's CO) to the subsidiary raid on Montchanin. In 1943 it took part in the first "shuttle-bombing" raids (when the targets were Friedrichshafen and Spezia) and the famous attack on Peenemunde. Among the targets attacked in 1944 were a coastal gun battery at St. Pierre du Mont and the V1 storage sites in the caves at St. Leu d'Esserent. In December 1944, it made a 1,900-mile round trip to bomb the German Baltic Fleet at Gdynia, while in March 1945, it was represented in the bomber force that so pulverised the defences of Wesel just before the Rhine crossing that Commandos were able to seize the town with only 36 casualties. In April 1945, came the last of the squadron's operations against the enemy - a bombing attack on an oil refinery at Vallo (Tonsberg) in Norway, and a simultaneous minelaying expedition to the Oslo fjord.[2]

During the Second World War No 106 Squadron operated on 496 nights and 46 days, flying 5,834 operational sorties. In so doing it lost 187 aircraft - a percentage loss on sorties flown of 3.21 - but on the credit side its gunners claimed 20 enemy aircraft destroyed, 3 probably destroyed and 29 damaged. A total of 267 decorations were won by the squadron, including a Victoria Cross awarded to Sergeant NC Jackson for conspicuous bravery during an attack on Schweinfurt on 26/27th April 1944.[1]

After VE-Day, 467 Sqn RAAF arrived at RAF Metheringham to train with 106 Sqn for operations in the Far East but the end of the war overtook this plan and the squadron was used to fly POW's and troops home, principally from Italian bases [2] until it finally disbanded at Metheringham , on 18 Feb 1946.[3]

The squadron was reformed - as 106(SM) Sqn. - on 22 July 1959 as one of 20 Strategic Missile (SM) squadrons associated with Project Emily. The squadron was equipped with three Thor Intermediate range ballistic missiles. and based at RAF Bardney.[2]

In October 1962, during the Cuban missile crisis, the squadron was kept at full readiness, with the missiles aimed at strategic targets in the USSR.

The squadron was disbanded on 24 May 1963, with the termination of the Thor Program in Britain.[2] 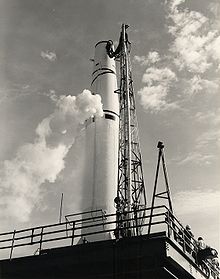 A Thor missile on the launching pad