No 297 Squadron was a squadron of the Royal Air Force. It was notable for being the first airborne forces squadron formed.[5] With sister No 296 Squadron it formed No 38 Wing RAF -soon to be expanded with sister No 295 Squadron, which expanded later to become No 38 Group RAF. 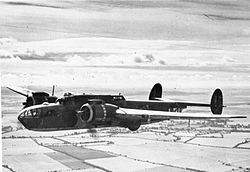 An example of the Armstrong Whitworth Albemarle as used by 297 Sqn.

The squadron moved to RAF Station Stoney Cross on 25 August 1943, where they practised parachute drops with the 8th Battalion parachute regiment and 22 independent parachute regiment in preparation for the D-Day invasion.[5] They then moved to RAF Station Brize Norton on 14 March 1944 to practice towing Horsa gliders in preparation for Operation Deadstick the deployment to capture the now famous Pegasus Bridge and the Merville Battery located on the Normandy coast overlooking Sword Beach. Their involvement in the D-Day operation was :

In September 1944 the squadron played its part in Operation Market Garden after temporarily moving to RAF Station Manston. They towed 29 Horsa and 2 Waco gliders in the first wave and 24 Horsas in the second, all without loss. On 30 September 1944 the squadron moved to RAF Station Earls Colne where the process of changing the Albemarles for the Halifax Mk.V was started, the squadron received additional Halifax Mk.III aircraft in February 1945 and Halifax A.7 in December 1945. On 24 Mar 1945 thirty Halifax aircraft towed Horsas manned with 6th Airborne paratroops to effect a successful Rhine crossing.[9] The squadron was disbanded on 1 April 1946.[7][8][10]