The squadron was formed at RAF Driffield in Yorkshire, England on 10 October 1942, under Article XV of the Empire Air Training Scheme. The majority of its original personnel were from British Commonwealth air forces other than the RAAF. Their replacement by Australians was a gradual process and it was only towards the end of the war that the squadron personnel were predominantly members of the RAAF.[2]

After the squadron had been equipped with Vickers Wellington medium bombers, it transferred to RAF Leconfield, also in Yorkshire, on 27 December 1942 and flew its first mission on 13 January 1943. Its main roles were strategic bombing over Germany and laying naval mines in the North Sea.[2] The squadron had its first direct encounter with the Luftwaffe on 14 February 1943 when, during a raid on Cologne, a Wellington Mk.X, serial number HE506, identification "HD-N", opened fire on a Junkers Ju 88 night fighter, while it was over either Turnhout Belgium, or the Dutch island of Tholen (sources differ). The crew reported seeing a brilliant flash after the rear gunner, Sergeant Angus, opened fire on it and the Junkers was claimed as probably destroyed.[5][6]

Following a mission on 14 April 1943, four members of the crew of a 466 Sqn Wellington Mk.X, HZ256, "HD-L", commanded by Sergeant Edward Hicks (Auxiliary Air Force) received medals.[7][8] A Distinguished Service Order (DSO) was awarded to Pilot Officer Raymond Hopkins (RAFVR), a Distinguished Flying Cross (DFC) went to Flying Officer Reginald Clayton (RAFVR), a Distinguished Flying Medal (DFM) to Sergeant Frederick Blair (RAF) and a Conspicuous Gallantry Medal (CGM) to Hicks. According to the RAAF Museum, the award of so many decorations to a single crew was "highly unusual".[9] The awards were gazetted on 14 May 1943, with a joint citation (see below). Following subsequent operations, Hicks received further decorations and acclaim.[10]

466 Sqn converted to the Handley Page Halifax heavy bomber in late 1943. In June 1944, the squadron returned to Driffield. From May 1944, operations were focussed on German infrastructure in France, such as coastal artillery batteries and railway marshalling yards, in preparation for the invasion of Europe.[9]

Flying Officer Joe Herman (RAAF), the captain of a 466 Sqn Halifax B.Mk.III, narrowly escaped death in a remarkable incident on 4 November 1944.[7][9][11][12] During a night mission over Germany, his aircraft (LV936, "HD-D"), was badly damaged by Flak. After ordering the crew to bail out, Herman was blown out of the plane, without a parachute. After falling a long way, possibly more than 3,000 metres, Herman fell onto the Halifax's mid-upper gunner, F/O John Vivash (RAAF), and grabbed one of his legs. Both men descended on one parachute, suffered minor injuries when landing and survived the war as prisoners of war. From a total crew of seven, only one other airman, Sgt H. W. Knott (RAF), survived. According to one source, at least three crew members were murdered after being captured.[12] 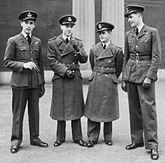 London, November 1943. The all-British/RAF crew of 466 Sqn Wellington "HD-L" at Buckingham Palace, about to receive medals resulting from their mission on 14 April: Flying Officer Raymond Hopkins DSO of Newport, Wales (left); Pilot Officer Frederick Blair DFM of Belfast, Pilot Officer Edward Hicks CGM of Newbury Park, Essex and Flying Officer Reginald Clayton DFC of Carshalton, Surrey.
Pilot Officer Hopkins, Flying Officer Clayton and Sergeants Hicks and Blair were air bomber [bomb aimer], navigator, captain and wireless operator respectively of an aircraft detailed to attack a target in the Ruhr. Over Germany the aircraft was attacked by an enemy [night] fighter. The first burst of fire from the attacker fatally injured the rear gunner [Sgt R. F. Field, RAF] and wounded the air bomber, navigator and wireless operator. The fighter made a second attack but Sergeant Hicks avoided its gunfire by turning steeply under the enemy aircraft which was not seen again. Although the hydraulic and brake systems ... were damaged, causing the wheels to drop down and the bomb doors to open, the crew decided to continue their mission. Pilot Officer Hopkins ... although suffering from a compound fracture of the arm and ... retaining consciousness with great difficulty, displayed unsurpassed determination by directing his pilot to the target and bombing it successfully. On the return flight, Pilot Officer Hopkins, Flying Officer Clayton and Sergeant Blair laboured for more than 2 hours to assist the mortally wounded rear gunner, extricating him from his turret and administering morphia; some of their efforts were made whilst flying at 15,000 feet and without oxygen. Sergeant Hicks eventually flew the damaged aircraft to an airfield in this country, where he effected a landing without the aid of flaps.
London Gazette, 11 May 1943.[13]

In May 1945, following the end of the war in Europe, the squadron dumped surplus bombs into the sea and began re-training at RAF Bassingbourn, in Cambridgeshire, as a transport unit. Some sources state that the squadron was renumbered as No. 10 Squadron RAAF on 20 June 1945,[14] while others say the squadron operated as a combined unit with No. 10 Sqn.[15] It was re-converting to Consolidated Liberator heavy bombers when Japan surrendered,[2][9] whereupon the squadron was disbanded at RAF Bassingbourn on 26 October 1945.[15][16]