The national dishes include; Pljeskavica (hamburger), Ćevapčići (grilled minced meat), and Sarma. The national drink is the plum brandy Slivovitz.

Serbian food is characterized, not only by elements of Serbia, but of former Yugoslavia as a whole. Peasantry has greatly influenced the cooking process. During the centuries under Ottoman rule, the Balkans received influences of the rich oriental cuisine, some of the most traditional dishes have common roots with those of Greece and Turkey. The centuries under Austro-Hungarian Empire richly influenced, especially in desserts. The spectra of Yugoslavia has enriched all of the modern successor state's national cuisines.

In recent times the Serbian diaspora has spread the cuisine across the world.

William, archbishop of Tyre, who visited Constantinople in 1179, described the Serbs: "They are rich in herds and flocks and unusually well supplied with milk, cheese, butter, meat, honey and wax".[1]

The first published cookbook in Serbia is Pata's Cookbook (Patin kuvar), written by Spasenija Pata Marković in 1907; the book remains in publication even today.[2]

Most people in Serbia will have three meals daily, breakfast, lunch and dinner, with lunch being the largest in the Mediterranean fashion. However, traditionally, only lunch and dinner existed, with breakfast being introduced in the second half of the 19th century.[3]

A number of foods which are simply bought in the West, are often made at home in Serbia. These include rakija (fruit brandy), slatko, jam, jelly, various pickled foods, notably sauerkraut, ajvar or sausages. The reasons for this range from economical to cultural. Food preparation is a strong part of the Serbian family tradition. 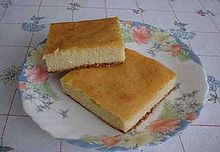 Breakfast in Serbia is an early but hearty meal, although before breakfast most people usually take a cup of coffee, in modern times maybe an espresso. With the breakfast itself either a tea, milk, milk coffee, or cocoa milk is served, pastries or bread are served with butter, jam, yogurt, sour cream and cheese, accompanied by bacon, sausages, salami, scrambled eggs and kajmak. 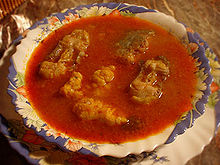 There are two types of soups in Serbian cuisine: standard soups called supa, and soups with roux (browned flour) - called čorba. The most common are simple pottages made of beef or poultry with added noodles. Fish soup (riblja čorba) and lamb soup (jagnjeca čorba) are considered to be delicacies. 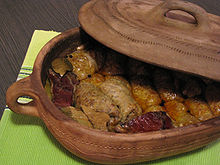 Serbian sarma prepared in a grne

Ćevapčići, a national dish of Serbia 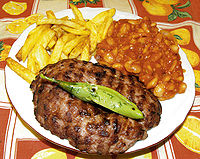 Grilling is very popular in Serbia, and makes the primary offer of main courses in most restaurants. It is often eaten as fast food. 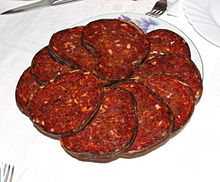 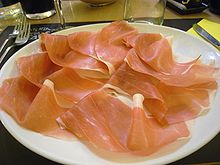 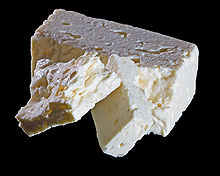 Bread is the basis of Serbian meals and it is often treated almost ritually. A traditional Serbian welcome is to offer the guest with just bread and salt; bread also plays an important role in religious rituals. Some people believe that it is sinful to throw away bread regardless of how old it is. Although pasta, rice, potato and similar side dishes did enter the everyday cuisine, many Serbs still eat bread with these meals.

In most bakeries and shops, white wheat bread loafs (typically 600 grams) are sold. In modern times, black bread and various graham bread variations regain popularity as a part of more healthy diets. In many rural households, bread is still baked in ovens, usually in bigger loafs. Also, the following breads and porridges are part of the traditional cuisine:

Serbian word for pie is "pita", which should not be confused with Greek pita. Greek pita is a kind of bread and is not called pita in Serbian (a similar pastry is called lepinja), while in Serbian language, "pita" refers to a pie in general, either one eaten in Serbia or a foreign one (such as apple pie).

A Serbian pie could, in general, be called in two ways: according to its mode of preparation, and according to its filling (although not every pie is prepared with every filling). For example, a "bundevara" is a pie filled with pumpkin and could refer to either a savijača (made of rolled phyllo) or a štrudla (made of rolled dough). Both sweet and salty pies are made, and some pies could be prepared in the same way with either sweet or salty filling.

A number of Serbian pies are made with phyllo, called "kore" in Serbian language. These include:

A common Serbian pie, not made with phyllo, is called "štrudla". To add to the confusion, it is not similar to strudel, but rather to the nut roll; but it is commonly made with poppy seeds and not walnuts. Various štrudlas include:

Tarts and similar pies have appeared in Serbian bakeries relatively recently and are not a traditional meal. 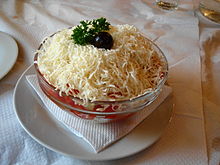 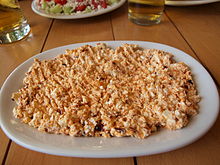 In Serbia, salads are typically eaten with the main course and not as an appetizer. Common salads include: 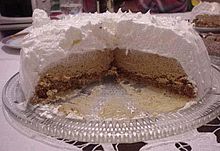 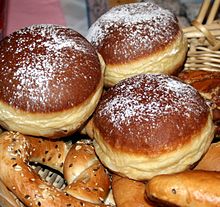 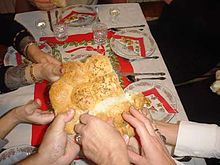 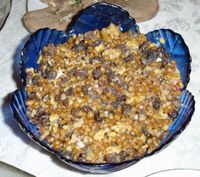 Serbian cuisine is generally lacking in spices and herbs: practically only black pepper and ground paprika are in widespread use, along with parsley used for soups.[4] Other spices sometimes used include white pepper, allspice, Coriandrum sativum, laurel, celery and clove.

High quality and quantity of fruit and abundance of water result in a number of high-quality fruit juices and mineral waters produced in Serbia, and being among its most widely known exports. There are few domestic carbonated soft drinks however. An interesting traditional soft drink, made from corn, now less commonly consumed is boza. Kvas is also being made by some breweries.

Serbian coffee, Turkish coffee prepared the Serbian way (домаћа кафа 'domestic coffee' or кафа 'coffee'. Especially strong coffee (without sugar and milk) is often referred to as 'Turkish' or 'black' coffee) is a traditional drink of Serbs. Tea is far less popular and mostly herbal teas are consumed, drunk on their own or as supplementary medicine.

Of dairies, yoghurt is common, as are kefir and similar varieties.

The famous Serbian Knjaz Milos mineral water is considered a national brand and can be used in any meal, also with the traditional greeting sweets "Slatko". 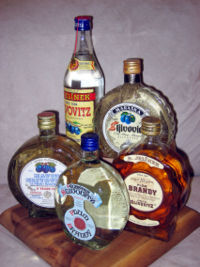 Sljivovica is a famous alcoholic drink in Serbia

Of distilled beverages, the most popular are various fruit brandies called rakija. Comparatively many people brew their own rakija, which is highly prized by friends and relatives. Various kinds of rakija are named after fruit they are made of; among the most known ones are:

Beer is widely enjoyed in Serbia, which has 14 breweries (see Beer in Serbia). Jelen pivo is usually considered to be the best. 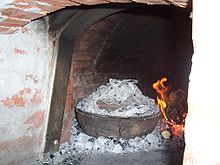 Some specific kitchenware for Serbia are: