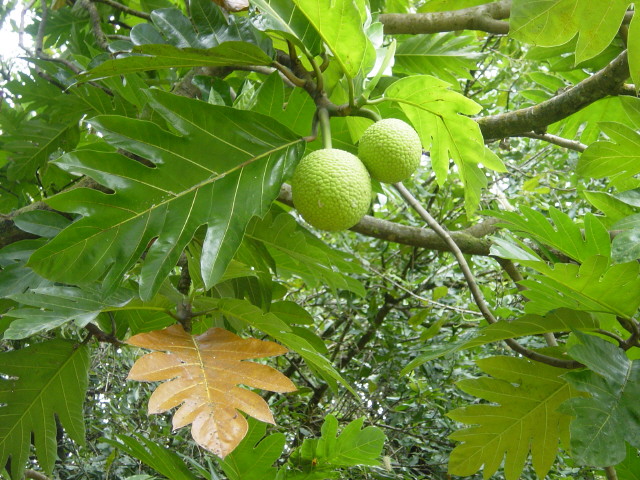 Breadfruit ("Artocarpus altilis") is a and native to the and western Pacific islands. It has also been widely planted in tropical regions elsewhere. It was collected and distributed by Lieutenant as one of the botanical samples collected by HMS "Bounty" in the late 18th century, on a quest for cheap, high-energy food sources for British in the .

Breadfruit trees grow to a height of 20 m (66 ft). The large and thick leaves are deeply cut into lobes. All parts of the tree yield , a milky juice, which is used for boat caulking.

The trees are monoecious, with male and female flowers growing on the same tree. The male s emerge first, followed shortly afterward by the female flowers, which grow into a capitulum, which are capable of pollination just three days later. The pollinators are Old World s (Family ). The compound, false fruit develops from the swollen perianth and originates from 1,500-2,000 flowers. These are visible on the skin of the fruit as hexagon-like disks.

Breadfruit is one of the highest-yielding food plants, with a single tree producing up to 200 or more fruits per season. In the South Pacific, the trees yield 50 to 150 fruits per year. In southern India, normal production is 150 to 200 fruits annually. Productivity varies between wet and dry areas. In the West Indies, a conservative estimate is 25 fruits per tree. Studies in Barbados indicate a reasonable potential of 6.7 to 13.4 tons per acre (16-32 tons/ha). Much higher yields have been forecast, but experts are skeptical and view these predictions as unrealistic. The grapefruit-sized ovoid fruit has a rough surface, and each fruit is divided into many s, each achene surrounded by a fleshy perianth and growing on a fleshy receptacle. Some selectively-bred s have seedless fruit.

The breadfruit is closely related to the and the . It is called "Kada Chakka"in language .

Breadfruit is a in many tropical regions. They were propagated far outside their native range by Polynesian voyagers who transported root cuttings and air-layered plants over long ocean distances. They are very rich in , and before being eaten they are roasted, baked, fried, or boiled. When cooked the taste is described as potato-like, or similar to fresh baked bread (hence the name).Because breadfruit trees usually produce large crops at certain times of the year, preservation is an issue. One traditional preservation technique is to bury peeled and washed fruits in a leaf-lined pit where they ferment over several weeks and produce a sour, sticky paste. So stored, the product may last a year or more, and some pits are reported to have produced edible contents more than 20 years later. [Balick, M. & Cox, P. (1996). Plants, People and Culture: The Science of Ethnobotany. New York: Scientific American Library HPHLP, p.85] Fermented breadfruit mash goes by many names such as "mahr", "ma", "masi", "furo", and "bwiru", among others.Most breadfruit varieties also produce a small number of fruits throughout the year, so fresh breadfruit is always available, but somewhat rare when not in season.

Breadfruit can be eaten once cooked, or can be further processed into a variety of other foods. A common product is a mixture of cooked or fermented breadfruit mash mixed with coconut milk and baked in banana leaves. Whole fruits can be cooked in an open fire, then cored and filled with other foods such as coconut milk, sugar and butter, cooked meats, or other fruits. The filled fruit can be further cooked so that the flavor of the filling permeates the flesh of the breadfruit.

The Hawaiian staple food called "poi" made of mashed is easily substituted or augmented with mashed breadfruit. The resulting “breadfruit poi” is called "poi ‘ulu".

Breadfruit is roughly 25% carbohydrates and 70% water. It has an average amount of vitamin C(20mg/100g) and small amounts of minerals (potassium and zinc) and vitamins B1 (100μg) . [Nutrition Facts for Breadfruit [http://www.healthaliciousness.com/nutritionfacts/nutrition-comparison.php?o=9059&t=&h=&s=100&e=&r=] ]

In tropical countries; breadfruit is sometimes roasted or baked, breadfruit can also be boiled.

According to an myth, the breadfruit originated from the sacrifice of the war god . After deciding to live secretly among mortals as a farmer, Ku married and had children. He and his family lived happily until a famine seized their island. When he could no longer bear to watch his children suffer, Ku told his wife that he could deliver them from starvation, but to do so he would have to leave them. Reluctantly, she agreed, and at her word, Ku descended into the ground right where he had stood until only the top of his head was visible. His family waited around the spot he had last been day and night, watering it with their tears until suddenly a small green shoot appeared where Ku had stood. Quickly, the shoot grew into a tall and leafy tree that was laden with heavy breadfruits that Ku's family and neighbors gratefully ate, joyfully saved from starvation. [Loebel-Fried, C. (2002)]

Though they are widely distributed throughout the Pacific, many breadfruit hybrids and cultivars are seedless or otherwise biologically incapable of naturally dispersing long distances. Therefore, their distribution in the Pacific was clearly enabled by humans, specifically prehistoric groups who colonized the Pacific Islands. To investigate the patterns of human migration throughout the Pacific, scientists have used molecular dating of breadfruit hybrids and cultivars in concert with anthropological data. Results support the west-to-east migration hypothesis, in which the people are thought to have traveled from to numerous islands. [Zerega, "et al." (2004)]

The breadfruit tree was mentioned in "The Coral Island", a novel written by Scottish juvenile fiction author R.M. Ballantyne.

"The Breadnut and the Breadfruit" is a short story by Maryse Condé.

* ("Artocarpus heterophyllus")
*
* , whose first novel "Breadfruit", is reportedly the most widely read book in

* [http://www.gutenberg.org/etext/15411 A Voyage to the South Sea] by William Bligh, 1792, from . The title in part of Bligh's own account of the famous mutiny is: "A Voyage to the South Sea, undertaken by command of His Majesty, for the purpose of conveying the bread-fruit tree to the West Indies"
* [http://www.breadfruit.org Breadfruit Institute]
* [http://www.hort.purdue.edu/newcrop/morton/breadfruit.html Fruits of Warm Climates: Breadfruit]
* [http://www.proscitech.com.au/trop/j.htm Know and Enjoy Tropical Fruit: Jackfruit, Breadfruit & Relatives]
* [http://www.healthaliciousness.com/nutritionfacts/nutrition-comparison.php?o=9059&t=&h=&s=100&e=&r= Nutrition Facts for Breadfruit]
* [http://www.montosogardens.com/artocarpus_altilis.htm Artocarpus altilis (Moraceae)]
* cite book
author=D. Ragone
date=1997
title=Breadfruit. Artocarpus altilis (Parkinson) Fosberg.
volume=10 Promoting the conservation and use of underutilized and neglected crops
publisher= Institute of Plant Genetics and Crop Plant Research, Gatersleben/International Plant Genetic Resources Institute, Rome, Italy |url=http://www.bioversityinternational.org/Publications/pubfile.asp?ID_PUB=342