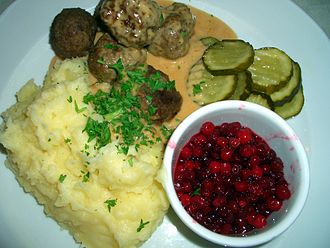 Due to Sweden's large north-south extent there have always been regional differences in Swedish cuisine. Historically, in the far North, meats such as reindeer, and other (semi-) game dishes were eaten, some of which have their roots in the Sami culture, while fresh vegetables have played a larger role in the South. Many traditional dishes employ simple, contrasting flavours; such as the traditional dish of hearty meatballs and gravy with tart, pungent lingonberry jam (slightly similar in taste to cranberry sauce).

Swedes have traditionally been very open to foreign influences, ranging from French cuisine during the 17th and 18th century, to the sushi and cafe latte of today. On the fast food side, pizza and hot-dogs have been a ubiquitous part of Swedish culture since the 1960s. Twenty years later, the same could be said about the growing popularity of the kebab and falafel, as many small restaurants specialise in such dishes.

Swedish cuisine could be described as centered around cultured dairy products, crisp and soft (often sugared) breads, berries and stone fruits, beef, pork, sweetened seafood and fish. Potatoes are often served as a side dish, often boiled. Swedish cuisine has a huge variety of breads of different shapes and sizes, made of rye, wheat, oat, white, dark, sour-dough, whole grain; soft flatbreads and crispbreads. There are many sweetened bread types and some use spices. Many meat dishes and especially meatballs are served with lingonberry jam. Fruit soups with high viscosity, like rose hip soup and blueberry soup (blåbärssoppa) served hot or cold, are typical of Swedish cuisine. Butter and margarine are the primary fat sources, although olive oil is becoming more popular. Sweden's pastry tradition features a variety of yeast buns, cookies, biscuits and cakes, many of them in a sugary style with a pastry (fika) are enormously popular in Sweden. 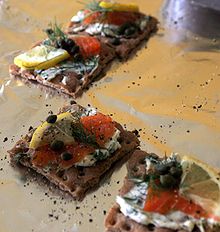 Gravlax on crisp bread with pepper and lemon The importance of fish has governed Swedish population and trade patterns far back in history. For preservation, fish were salted and cured. Salt became a major trade item at the dawn of the Scandinavian middle ages, which began circa 1000 AD. Cabbage preserved as sauerkraut and various kinds of preserved berries, apples, etc. were used once as a source of vitamin C during the winter (today sauerkraut is used very seldom in Swedish cuisine). Lingonberry jam, still a favourite, may be the most traditional and typical Swedish way to add freshness to sometimes rather heavy food, such as steaks and stews.

Sweden's long winters explain the lack of fresh vegetables in many traditional recipes. In older times, plants that would sustain the population through the winters were cornerstones; various turnips such as the kålrot (rutabaga) (aptly named "swede" in British English) were gradually supplanted or complemented by the potato in the 18th century. A lack of distinct spices made every-day food rather plain by today's standards, although a number of local herbs and plants have been used since ancient times. This tradition is still present in today’s Swedish dishes, which are still rather sparingly spiced.

Both before and after this period, some new Germanic dishes were also brought in by immigrants, such as persons related to the Hanseatic League, settling in Stockholm, Visby, and Kalmar. Swedish traders and aristocrats naturally also picked up some food traditions in foreign countries; cabbage rolls (kåldolmar) being one example. Cabbage rolls were introduced in Sweden by Karl XII who came in contact with this dish at the time of the Battle of Poltava and during his camp in the Turkish Bender and later introduced by his Ottoman creditors, which moved to Stockholm in 1716. Kåldolmar were already described in 1755, by Cajsa Warg, in her famous Hjelpreda i hushållningen för unga fruentimber.

Dishes akin to Swedish husmanskost and food traditions are found also in other Scandinavian countries; details may vary. Sweden is part of the vodka belt and historically distilled beverages, such as brännvin and snaps, have been a traditional daily complement to food. Consumption of wine in Sweden has increased during the last fifty years, partly at the expense of beer and stronger alcoholic beverages. In many countries locally produced wines are combined with local husmanskost.

Husmanskost has undergone a renaissance during the last decades as well known (or famous) Swedish chefs, such as Tore Wretman, have presented modernised variants of classical Swedish dishes. In this nouvel husman the amount of fat (which was needed to sustain hard manual labour in the old days) is reduced and some new ingredients are introduced. The cooking methods are tinkered with as well, in order to speed up the cooking process and/or enhance the nutritional value or flavor of the dishes.

Swedes have adopted some foreign influences, ranging from cabbage rolls and influences from French cuisine during the 17th and 18th centuries, to the pizza and cafe latte of today. Many Swedish restaurateurs mix traditional husmanskost with a modern, gourmet approach.

On the fast food side, hot dog sausage served in a bun or wrapped in flatbread is the classical Swedish fast food, but pizza has also been an integral part of Swedish fast food since the 1960s. Twenty years later, the same could be said about kebab and falafel, as many small restaurants specialise in such dishes. A plate for midnight supper 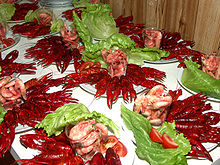 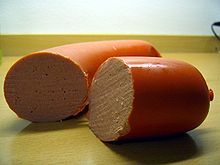 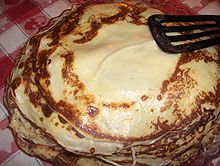 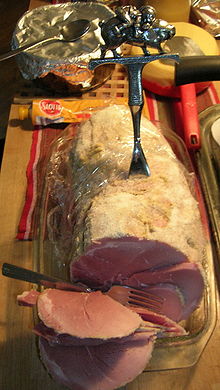 Pickled herring, sour cream and chopped chives, potatoes and an egg half served at midsummer.

Swedish traditional dishes, some of which are many hundreds of years old, others perhaps a century or less, are still a very important part of Swedish everyday meals, in spite of the fact that modern day Swedish cuisine adopts many international dishes.

Internationally, the most renowned Swedish culinary tradition is the smörgåsbord and, at Christmas, the julbord, including well known Swedish dishes such as gravlax and meatballs.

In Sweden, traditionally, Thursday has been soup day because the maids had half the day off and soup was easy to prepare in advance. One of the most traditional Swedish soups, still served in many restaurants and households every Thursday together with pancakes, is the yellow pea soup, or ärtsoppa. It dates back to the old tradition of peas being associated with Thor. This is a simple meal, a very thick soup, basically consisting of boiled yellow peas, a little onion, salt and small pieces of pork. It is often served with mustard and followed by thin pancakes (see pannkakor). The Swedish Army also serve their conscripts pea soup and pancakes every Thursday.

Potatoes are eaten year-round as the main source of carbohydrates, and are a staple in many traditional dishes. Not until the last 50 years have pasta or rice become common on the dinner table.

There are several different kinds of potatoes: the most appreciated is the new potato, a potato which ripens in early summer, and is enjoyed at the traditional mid-summer feast called midsommar. New potatoes at midsommar are served with pickled herring, chives, sour cream, and the first strawberries of the year are traditionally served as dessert.

The most highly regarded mushroom in Sweden is the chanterelle, which is considered a delicacy. The chanterelle is usually served as a side dish together with steaks, or fried with onions and sauce served on an open sandwich. Second to the chanterelle, and considered almost as delicious, is the porcini mushroom, or karljohansvamp named after Charles XIV John (Karl XIV Johan) who introduced its use as food.

In August, at the traditional feast known as crayfish party, kräftskiva, Swedes eat large amounts of boiled crayfish boiled and then marinated in a broth with salt, a little bit of sugar, and a large amount of dill.

Some traditional Swedish dishes are:

A limited range of fish and other seafood is an important part of the Swedish cuisine. Farmed salmon from Norway has become increasingly popular. And pickled, sweetened herring, inlagd sill, is the most traditional of Swedish appetizers. Shrimp and lobster are specialties of the Skagerrak coast.

In recent years American brownies, cookies and cup-cakes have become popular in cafés and restaurants.[citation needed]

Bakelser and other types of kaffebröd (or more colloquially "fikabröd") are various forms of pastries, pieces of cake, cookies and buns that are usually consumed, except by children, with relatively strong coffee (see fika). Popular kinds of kaffebröd available in a traditional Swedish konditori (coffee shop / patisserie) include:

In the summer, various seasonal fruit cakes are common. Strawberry and cream cake are highly regarded. Strawberries are also often eaten on their own with sugar and milk or cream. In the late summer and autumn, apple cakes and pies are baked. The apple cake is often served with vanilla custard, but sometimes with ice cream or whipped cream.

During the winter holidays, traditional candy and pastries include:

Sweden is one of the heaviest coffee drinking countries in the world, behind Finland. Milk consumption in Sweden is also very high, again only second to Finland. Milk is bought in milk cartons, and it is no coincidence that Tetra Pak, the world's largest maker of milk cartons, was founded in Sweden. Milk is considered the standard drink to have with meals during weekdays in many families, for both children and adults. 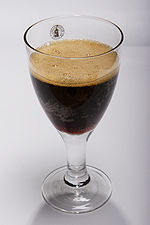 A cup of blueberry soup, (blåbärssoppa) topped with cereals The most important of stronger beverages in the Swedish cuisine is Brännvin which is a general term that includes mainly two kinds of beverages: The Akvavit, also called Aqua vitae, and the Vodka. When consumed traditionally it is often served as a Snaps, but Vodka is also populary consumed as a drink ingredient. Renat is often considered to be the national vodka of Sweden, but other highly popular brands are Explorer Vodka and Absolut Vodka, the latter being one of the world's best known liquor brands. Most forms of Brännvin have around 40% alcohol.

The production of hard liquor has a tradition dating back to the 18th century and was at a high in the 1840s. Since the 1880s, the state-owned Systembolaget has a monopoly on selling spirits with more than 3.5% alcohol, limiting access. Hembränt (moonshine) used to be made in rural Sweden, but production has lessened in recent years due to more liberal rules for the import of alcohol as well as increased smuggling.

Beer is also widely consumed in Sweden and the typical Swedish beer is lager beer of a bright and bitter kind. The brands Pripps Blå and Norrlands Guld are common examples. In the last few decades, many small breweries (microbreweries) have emerged all over Sweden offering a wide range of styles and brands. Nils Oscar Brewery, Dugges Ale och Porterbryggeri and Närke Kulturbryggeri are examples of these young Swedish microbreweries. Many microbreweries in Sweden are inspired by the US craft beer movement, brewing American styles and/or styles commonly associated with American craft breweries, e.g. American Pale Ale and American IPA.

Though overweight and metabolic syndrome has been rising in recent years with the increase in more highly processed food and fast food, the obesity rate is still low compared to many other industrial countries, well below that of the U.S., at least in part due to smaller portions and a more active lifestyle.[citation needed]

Low-fat products, wholemeal bread and other alternatives are common — grocery stores usually sell milk in four or five different fat levels, from 3% to 0.1%.[10]

Swedish alcohol consumption has changed during the last few decades due to more "continental" habits, as Swedes combine their traditional weekend binge drinking with casual weekday drinking and relaxed import regulations (see alcoholic beverages in Sweden). Tobacco smoking has decreased greatly during the last few decades, mostly because of many Swedes' transition to the national specialty snus and (more recently) due to smoking being prohibited in bars and public places.[citation needed] Recreational drugs other than alcohol and tobacco are less common in Sweden than in continental Europe.[citation needed]