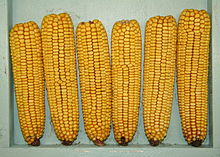 Maize is a staple food in Cameroon. 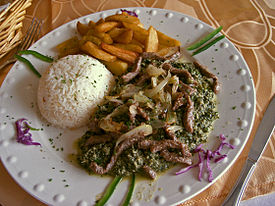 Ndolé is the national dish of Cameroon 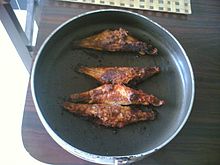 Cameroonian cuisine is one of the most varied in Africa due to its location on the crossroads between the north, west, and centre of the continent; added to this is the profound influence of French food, a legacy of the colonial era.

The national dish of Cameroon is ndolé, a stew consisting of fish or beef, nuts and bitter greens.[1] Staple foods in Cameroon include cassava, yam, rice, plantain, potato, maize, beans, and millet. The French introduced French bread and Italian pasta, which are not as widely consumed, however, due to their price. The main source of protein for most inhabitants is fish, with poultry and meat being too expensive for anything other than special occasions. Bush meat, however, is commonly consumed, some of the most sought after species being the pangolin, the porcupine and the giant rat. There is also a thriving trade in such exotic bush meat species as chimpanzee and gorilla.

The soil of most of the country is very fertile and a wide variety of vegetables and fruits, both domestic and imported species, are grown. Common vegetables include tomatoes, bitterleaf, cassava leaves, okra, and garden egg (eggplant).

Among Cameroonian specialties are brochettes (a kind of barbecued kebab made from either chicken, beef, or goat), sangah (a mixture of maize, cassava leaf and palmnut juice) and ndolé (a spicy stew containing bitterleaf greens, meat, shrimp, pork rind, and peanut paste).