Belizean cuisine is an amalgamation of all ethnicities in the nation of Belize, and their respectively wide variety of foods. Breakfast consists of bread, flour tortillas, or fry jack that are often homemade. Fry jacks aren't only served in Belize.[citation needed] In fact, they go by many different names all over the world—beignets in New Orleans, sopapillas in Mexico and the American southwest, or often, simply 'fried dough'. [1] It is eaten with various cheeses, refried beans, various forms of eggs or cereal, topped off by milk for younger ones and coffee or tea for adults. Midday meals vary, from lighter foods such as rice and beans or beans and rice with or without coconut milk, tamales, panades, (fried maize shells with beans or fish) and meat pies, escabeche (onion soup), chirmole (soup), stew chicken and garnaches (fried tortillas with beans, cheese, and sauce) to various constituted dinners featuring some type of rice and beans, meat and salad or coleslaw. In the rural areas meals may be more simplified than in the cities; the Maya use recado, corn or maize for most of their meals, and the Garifuna are fond of seafood, cassava (particularly made into cassava bread or Ereba) and vegetables. The nation abounds with restaurants and fast food establishments selling fairly cheaply. Local fruits are quite common, but raw vegetables from the markets less so. Mealtime is a communion for families and schools and some businesses close at midday for lunch, reopening later in the afternoon.

Regular deli items originally from the Mestizo culture that are now considered pan-Belizean include garnaches, fried corn tortilla smeared with beans and shredded cheese, tamales made from corn and chicken or its sister and panades which can be thought of as a fried corn patty with beans or seasoned shredded fish inside and topped by a tangy onion sauce.

The most famous Maya dish is called Caldo. Tortillas, cooked on a comal and used to wrap other foods (meat, beans, etc.), were common and are perhaps the most well-known pre-Columbian Mesoamerican food. Tamales consist of corn dough, often containing a filling, that are wrapped in a corn husk and steam-cooked. Both atole and pozole were liquid based gruel-like dishes that were made by mixing ground maize (hominy) with water, but being the first much more dense used as a drinking source and the second one with complete big grains of maize incorporated into a chicken broth. Though these dishes could be consumed plain, other ingredients were added to diversify flavor, including, for example, honey, chiles, meat, seafood, cacao, wild onions, and salt.

Kriols in general eat a relatively balanced diet. The Bile Up (or Boil Up) is consider the cultural dish of the Belizean Kriols. It is combination Boiled Eggs, Fish and/or Pig tail, with a number of ground foods such as Cassava, Green Plantains, Yams, Sweet Potatoes, cocoa, and Tomato Sauce. In Belize, cassava is traditionally made into "bammy," a small fried cassava cake inherited from the Garifuna. The cassava root is grated, rinsed well, dried, salted, and pressed to form flat cakes about 4 inches in diameter and 1/2-inch thick. The cakes are lightly fried, then dipped in coconut milk and fried again. Bammies are usually served as a starchy side dish with breakfast, with fish dishes or alone as a snack. Cassava Pone is a traditional Belizean Kriol and pan-West Indian dessert recipe for a classic cassava flour cake sometimes made with coconuts and raisins.

The Kriol fish seré is similar to a dish from the Garifuna culture, called hudut. There are two main types of hudut – one made with coconut milk, similar to the seré described above, but made with mashed half-ripe plantain. The other type does not use coconut milk and may best be compared to a spicy fish soup – of course, less spice to taste. If you are really brave, you can “bos a pepa” into the mix! Belizean pepper sauce is famous, whether it’s the hot habanero or the more temperate jalapeño! 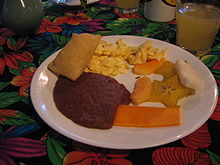 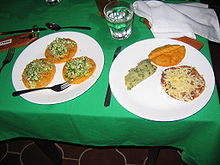 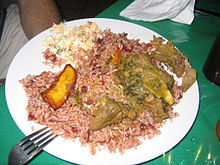 Every single part of the coconut has some use: the dried husk for ornamental arts and for getting the fire going in a bar-b-cue; the water as a refreshing beverage or as a mixer with alcoholic drinks; the meat grated for its milk for uses as described above, or in other preparations, like the distinctive coconut-flavored taste of Kriol bread and bun. Dukunu is a dish made with sweetened starch (usually cornmeal but can also be sweet corn wrapped and boiled in aluminum foil or a banana leaf. Cahn Sham is ground or powdered sweetened parched corn. The dried grated coconut meat, after you mix with water and squeeze out its milk, provides the basis for many Belizean desserts. Like coconut pie and tarts, coconut crust (the grated coconut is sweetened with sugar and baked in a flour crust folded over like a patty), tablata, which is the grated coconut meat mixed with thin ginger slices, sugar and water, baked and cut into squares; there is also the version called cut-o-brute, which is made of chunks of coconut instead of the grated pieces; and then there is trifle, made with half green grated coconut, milk, flour, sugar, eggs, lemon essence, margarine and baking powder (think of it as coconut cake), and coconut fudge and coconut ice cream to mention just some of the delicious coconut-based desserts.

Now let’s get a quick taste of some of the other traditional Belizean cuisine regulars which you can find on most menus. Often, restaurants will earmark a particular item for a particular day of the week (with rice-and-beans always daily!). Let’s start with breakfast. Sizzling fry jacks or earthy Johnny cakes accompanied by fried beans with sausage and/or eggs makes for a hearty Belizean breakfast. Both the jacks and Johnny cakes are made from flour, but while the jacks are flattened and fried, the Johnny cakes are round fluffy savory biscuits. Just a pat of butter melting with a slice of cheese on a hot Johnny cake is often enough to start the day!

Among the main staples of a Kriol dinner are rice and beans with some type of meat and salad, whether potato, vegetable, or coleslaw, seafoods including fish, conch, lobster, some game meats including iguana, deer, peccary and gibnut; and ground foods such as cassava, potatoes, cocoa and plantains. Fresh juice or water are typically served, occasionally replaced by soft drinks and alcoholic beverages (homemade wines made from berries, cashew, sorosi, grapefruit and rice are especially common). Typical desserts include sweets such as wangla and powderbun, cakes and pies, and potato pudding (pound). Usually to be seen on a breakfast table are specially made bread and bun (officially named after them), johnny-cakes and fry-cakes (also called fry jacks). In recent years Kriols have adopted foods from other groups as they have adopted theirs.

There is a wide variety of Garifuna dishes , including the more commonly known ereba (cassava bread) made from grated cassava or manioc. This is done in an ancient and time-consuming process involving a long, snake-like woven basket (ruguma) which strains the cassava of its juice. It is then dried overnight and later sieved through flat rounded baskets (hibise) to form flour that is baked into pancakes on a large iron griddle. Ereba is fondly eaten with fish, hudutu (pounded plantains) or alone with gravy (lasusu). Others include: Bundiga (a plantain lasusu), Mazapan, and Bimacacule (sticky sweet rice).