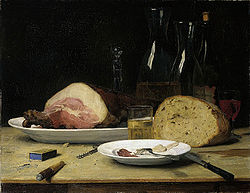 A meal is an instance of eating, specifically one that takes place at a specific time and includes specific, prepared food.

Meals occur primarily at homes, restaurants, and cafeterias, but may occur anywhere. Regular meals occur on a daily basis, typically several times a day. Special meals are usually held in conjunction with such occasions as birthdays, weddings, anniversaries, and holidays.

A meal is different from a snack in that meals are larger, more varied, and more filling, while snacks are more likely to be small, high-calorie affairs; however, any food eaten in small amounts at an unscheduled time can be classified as a snack.

A picnic is an outdoor meal where one brings one's food, such as a sandwich or a prepared meal (sometimes in a picnic basket). It often takes place in a natural or recreative area, such as a park, forest, beach, or grassy lawn. On long drives a picnic may take place at a road-side stop such as a rest area.

A banquet is a large, often formal, and elaborate meal with many guests and dishes. 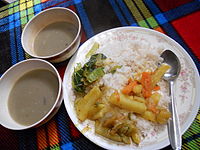 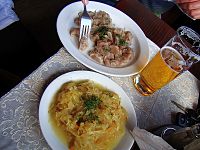 Most Western-world multicourse meals follow a standard sequence, influenced by traditional French haute cuisine. Each course is supposed to be designed with a particular size and genre that befits its place in the sequence. There are variations depending on location and custom. The following is a common sequence for multi-course meals:

Sorbet or other palate cleansers might be served between courses.

A meal may also begin with an amuse-bouche. An amuse-bouche, also called an amuse-gueule, is a tiny bite-sized morsel served before the hors d'œuvre or first course of a meal. These, often accompanied by a proper complementing wine, are served as an excitement of taste buds to both prepare the guest for the meal and to offer a glimpse into the chef's approach to cooking.

An entremet is a small dish that may be served between courses, or as a dessert.

A meal at the court of Emperor Ferdinand I,

These are the most common set mealtimes in the Western-world.