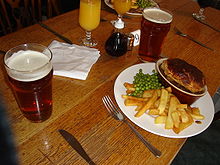 Pub grub - a pie, along with a pint. Public houses are a part of British,[1] Irish,[2] Scottish,[3] and Australian culture.[4]
See also: Cuisine, Global cuisines, and Outline of cuisines

Regional cuisine can be defined as cuisine based upon global, national, state or local regions.[5] Regional cuisines may vary based upon food availability and trade, varying climates, cooking traditions and practices, and cultural differences.[6] One noteworthy definition is based upon traditional cuisine: "A traditional cuisine is a coherent tradition of food preparation that rises from the daily lives and kitchens of a people over an extended period of time in a specific region of a country, or a specific country, and which, when localized, has notable distinctions from the cuisine of the country as a whole."[6] Regional food preparation traditions, customs and ingredients often combine to create dishes unique to a particular region.[7] Regional cuisines are often named after the geographic areas or regions that they originate from.[6] 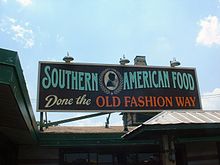 American Southern food is often traditional, or "old-fashioned", as seen on a sign for the Granny Cantrell's restaurants in the Florida Panhandle.