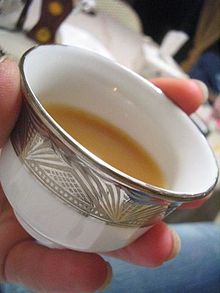 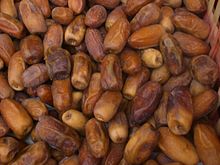 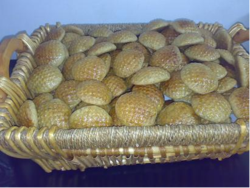 Food staples in Saudi Arabian cuisine include lamb, grilled chicken, falafel (deep-fried chickpea balls), shawarma (spit-cooked sliced lamb), mutabbaq and Ful medames.[1] Arabic unleavened bread, or khobz (خبز), is eaten with almost all meals, and is often used as an edible utensil to scoop foods.[1] Kabsa, rice with chicken and lamb, is very popular and is considered iconic. Traditional coffeehouses used to be ubiquitous, but are now being displaced by food-hall style cafes. Arabic tea is also a famous custom, which is used in both casual and formal meetings between friends, family and strangers. The tea is black (without milk) and has herbal flavoring that comes in many variations.

The same types of foods have been consumed by the Saudi Arabian people for thousands of years.[1] Basic ingredients include wheat, rice, chicken, fava beans, yogurt and dates.[1] Saudi Arabia produces approximately 600 million pounds of dates annually.[1] Per capita, Saudis consume the largest number of chickens in the world, at an average of 88.2 pounds of chicken per person annually.[1] Lamb is served traditionally to guests and during holidays.[1]

Sheep, goat and camel milk are also staples of Bedouins. Yogurt is consumed whole, made into a kefir-type of drink called laban and used to prepare sauces.[1]

Islamic dietary laws forbid the eating of pork and the drinking of alcohol, and this law is enforced throughout Saudi Arabia. According to halal Islamic law, animals must be butchered in a particular way and blessed before they can be eaten. In 2008, Saudi Arabia was the world's fifth largest importer of both sheep meat and goat meat.

Both western style grocery stores and typical Arabic marketplaces are plentiful in Saudi Arabia. For those that prefer wide aisles, stainless steel carts and a single location for shopping, the Kingdom aptly caters with popular chain stores like Tamimi, Panda (and its mega version, Hyper Panda), Othaim, Carrefour, Danube, and Halwani.

The expat population in Saudi Arabia may feel at ease in the company of so many English labels, but often many of the goods are imported and are proportionately expensive.

As an alternative, Saudi Arabian vegetable markets source some of the freshest produce for negotiable prices. Each of the big city neighborhoods tend to have their own markets. Frequenting particular stalls and developing relationships with vendors can often help to reduce prices or inspire "specials". 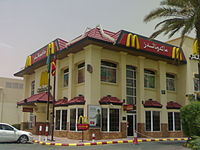