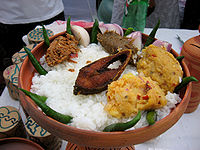 Panta Ilish - a traditional Bengali platter of pantha bhat- A Bangladeshi variant of Congee (in soup) with fried Ilish slice, supplemented with dried fish (Shutki), pickles (Achar), dal, green chillies and onion - is a popular serving for the Pohela Boishakh festival in Bangladesh.

Bangladeshi cuisine refers to the Bengali cuisine prevalent in Bangladesh. Bangladesh was the eastern part of Bengal before the Partition of India. The Bangladeshi cuisine incorporates many Persian-Arabic elements and the usage of beef greatly sets it apart from the cuisine in West Bengal in India. It also has considerable regional variations. A staple across the country however is rice, various kinds of lentil, which is locally known as dal (sometimes written as daal) & fish. As a large percentage of the land (over 80% on some occasions) can be under water, either intentionally because of farming practices or due to severe climatological, topographical or geographical conditions, not surprisingly fish features as a major source of protein in the Bangladeshi diet. There is also a saying which goes, "Machh-e-Bhat-e-Bangali" (Fish and rice make a Bengali).

An integral part of Bangladeshi cuisine is mutton, the presence of which is a must especially in feasts and banquets. Kabab from mutton is immensely popular throughout the country. Mutton is used in the preparation of a wide range of dishes including biryani, tehari, haleem, and many others. Regional feasts such as the Mezbaan and Ziafat of Chittagong, Sylhet, and Comilla or the Dawat of Dhaka will remain incomplete without serving spicy Mutton.

Bangladeshi cuisine is a generic terminology to refer to the cooking-style and trend now prevalent in Bangladesh. However, there are several regional variations, in terms of dishes, cooking style, serving style and nomenclature. In general, for cooking purposes, the administrative divisions more or less correspond to regional divides as well. 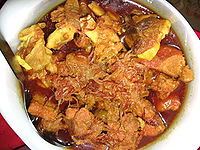 The main differences are as follows: 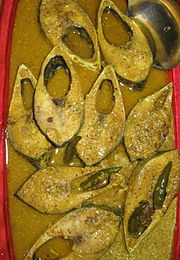 Shorshe Ilish, a dish of smoked ilish with mustard seeds, has been an important part of both Bangladeshi and Bengali cuisine.

The staples of Bangladeshi cuisine are rice, atta (a special type of whole wheat flour), and at least five dozen varieties of pulses, the most important of which are chana (bengal gram), tur (pigeon pea or red gram), urod (black gram), and mung (green gram). Pulses are used almost exclusively in the form of dal, except chana, which is often cooked whole for breakfast and is processed into flour (beshon). However, unlike neighbouring Indian food that includes types of rice and bread, the main source of carbohydrates in a "regular" Bangladeshi meal is plain white rice. Different kinds of fried rice, in the forms of pulao and biriyani are eaten mainly on special occasions and at parties.

Bangladeshi food varies between very 'sweet' and mild-to extremely spicy, many tourists even from other South East Asian and Subcontinental countries find the food spicy. It resembles North East Indian and South East Asian food more closely than that of any other part of the Subcontinent, most likely due to geographic and cultural proximity. The most important flavours in Bangladeshi cuisine are garlic, ginger, lime, coriander, cumin, turmeric and chilli. In sweet dishes, cardamom and cinnamon are amongst the natural flavours. 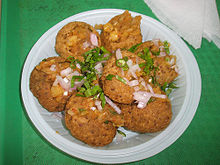 There are several styles of Bangladeshi bread, including Luchi, Nan, Tondul rooti, chapati and paratha

Bangladeshi cuisine has a rich tradition of sweets. The most common sweets and desserts include -