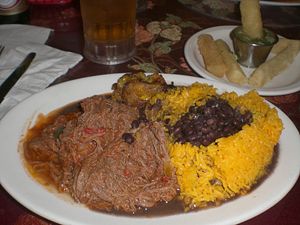 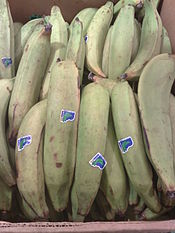 Cuban cuisine is a fusion of Spanish, African and Caribbean cuisines. Cuban recipes share spices and techniques with Spanish and African cooking, with some Caribbean influence in spice and flavor. This results in a unique, interesting and flavorful blend of the several different cultural influences. A small, but noteworthy, Chinese influence can also be accounted for, mainly in the Havana area. During colonial times, Cuba was an important port for trade, and many Spaniards who lived there brought their culinary traditions along with them.[1]

As a result of the colonization of Cuba by Spain, one of the main influences on the cuisine is from Spain. Along with Spain, other culinary influences include Africa, from the Africans that were brought to Cuba as slaves, and Dutch, from the French colonists that came to Cuba from Haiti.[1] Another important factor is that Cuba itself is an island, making seafood something that greatly influences Cuban cuisine. Another contributing factor to Cuban cuisine is the fact that Cuba is in a tropical climate. The tropical climate produces fruits and root vegetables that are used in Cuban dishes and meals.[2]

A typical meal would consist of rice and beans, cooked together or apart. When cooked together the recipe is called either, "Congri" (red beans and rice), or "Moros" or "Moros y Cristianos" (black beans and rice) if cooked separately it is called "Arroz con/y Frijoles"--Rice with/and Beans".[3][4] A main course (mainly pork or beef), some sort of vianda (not to be confused with the French viande which stands for "meat", this term encompasses several types of tubers, such as yuca, malanga, and potato, as well as plantains, unripe bananas and even corn), a salad (usually simply composed of tomato, lettuce and avocado, though cucumber, carrots, cabbage and radish are not uncommon). Curiously, typical criollo meals largely ignore fruit, except ripe plantains, which are usually consumed together with the rice and beans. Tropical fruit could be served, however, depending on each family's preferences. Usually, all dishes are brought together to the table at once, except maybe for desserts.

Rice and beans are a culinary element found throughout Cuba, although it varies by region. In the eastern part of the island, "arroz congri oriental" is the predominant rice and bean dish. White rice and red kidney beans are cooked together with a sofrito and then baked in the oven. The same procedure is used for the above mentioned Congri (also known by the terms Arroz Moro and Moros y Cristianos - literally "Moors and Christians") which instead uses black beans. Although the process of preparing the black bean soup contains basics (onion, garlic, bay leaf, salt) each region has their tradition of preparing it.

Meat, when available on ration book is usually served in light sauces. The most popular sauce, used to accompany not onlyroasted pork, but also the viandas, is Mojo or Mojito (not to be confused with the Mojito cocktail), made with oil, garlic, onion, spices such as oregano and bitter orange or lime juice. The origin of Cuban mojo comes from the mojo sauces of the Canary Islands. Cuban mojo is made with different ingredients, but the same idea and technique is used from the Canary Islands. Of course with so many Canary Islander immigrants in Cuba, the Canary Islander influence was strong. Ropa vieja is shredded beef dish (usually flank) simmered in tomato-based criollo sauce until it falls apart. ropa vieja is the Spanish name meaning "old clothes", in which the dish gets its name from the shredded meat resembling "old clothes". Ropa vieja is also from the Canary Islands, as is many of the origins of Cuban food. Boliche is a beef roast, stuffed with chorizo sausage and hard boiled eggs.

Equally popular are tamales, although not exactly similar to its Mexican counterpart. Made with corn flour, shortening and pieces of pork meat, tamales are wrapped in corn leaves and tied, boiled in salted water and served in a number of different ways. Tamales en cazuela is almost the same recipe, although it does not require the lengthy process of packing the tamales in the corn leaves before cooking, but rather is directly cooked in the pot. Tamales as well as Black Bean soup, are among the few indigenous foods that have remained part of the modern Cuban cuisine.

Stews and soups are common. These are usually consumed along with white rice or gofio (a type of corn flour, also from the Canary Islands), or eaten alone. Corn stew, corn soup (guiso), caldosa (a soup made with a variety of tubers and meats), are popular dishes as well. Also common when available are the popular white bean Spanish stews, such as Caldo Gallego (Galician Stew), Fabada Asturiana (Asturian Stew) and Cocido de Garbanzos (Chickpea Stew).

Although Western Cuba's cooking is technically criollo as well (as this term signifies the existence of Spanish roots), its style can be separated from mainstream criollo, particularly in Havana. This city, for a number of reasons, was more continental and closer to the European cuisine[citation needed]. There's also a notable Chinese influence, in dishes such as sopa china (an egg and onion soup) and arroz salteado (sauteed rice), among others. Rice is usually consumed separately from beans, and flour is much more commonly used (it is almost completely ignored in mainstream criollo cooking). Some Havana dishes make frequent use of alcaparrado, a mix of olives, raisins and caper which provide the sweet-and-sour-inspired flavor that is typical of this cuisine. Alcaparrado is used as an ingredient in several recipes, usually as part of sauces to accompany meats. It is also cooked together with ground beef to provide the meat stuffing for a variety of Cuban pastries, or finger food, very popular with Cubans.

Western cuisine also makes wider use of eggs, particularly omelettes (such as tortilla de papa) and fried eggs (huevos à la habanera, fried eggs served over white rice and fried plantains). Fish dishes are also common, especially in coastal areas, and although Cuba has a well-developed lobster fishing industry, it is used very sparsely. Aside from Cuba's present economic condition, which makes lobster an unreachable food for most families, Cuban cuisine was always of inland origin, therefore fish and sea products are as commonly used as in coastal areas, where crab is another common food staple. Popular fish recipes are enchilado (shrimp, fish, crab or lobster in a sauce that, despite its name, contains no chili), and à la vizcaína, a tomato-based sauce of Basque origin used to cook bacalao (salted cod).

Other Spanish dishes can be found in Cuba, such as the paella, arroz con pollo (chicken cooked with yellow rice much like a paella), and the empanada gallega (which is similar to an English meat pie). Due to heavy Galician and Asturian migration during the early 20th century, many northern Spanish dishes made their way to Cuba and influenced the cooking of many families, like the pulpo à la gallega.

While western Cuba is heavily influenced by its European roots, eastern Cuba (the old Oriente province) is influenced by African and Caribbean cuisines. Perhaps the biggest contribution is the Congrí oriental, which is cooked red beans and rice. This is due to the close proximity to the other Spanish-speaking islands, where red beans are more prevalent than black beans. Many foods from the Dominican Republic and Puerto Rico can be found in eastern Cuba with their own twists. One example would be the mofongo (called fufú de plátano in Cuba), which is mashed plantains stuffed with pork, chicken, or seafood. The name "fufu" comes from Western Africa.

The majority of sandwiches in Cuba make use of traditional Cuban bread, a long loaf made with lard, instead of oil, and extra moisture, the combination of which lends the bread a distinctive texture. 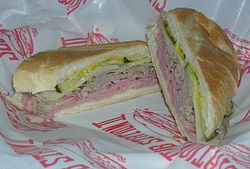 A Cuban sandwich is a popular lunch item that grew out of the once-open flow of cigar workers between Cuba and Florida (specifically Ybor City, Tampa and Key West) in the late 1800s[5][6][7] It is a sandwich on lightly buttered Cuban bread with sliced roast pork, thinly sliced Serrano ham, Swiss cheese, dill pickles, and yellow mustard. In Tampa, Genoa salami[8] is traditionally layered in with the other meats, probably due to influence of Italian immigrants who lived side-by-side with Cubans and Spaniards in Ybor City[9]. Tomatoes and lettuce are available additions in many restaurants, but these are considered by traditionalists as an unacceptable Americanization of the sandwich.[10]

After assembly, the Cuban sandwich is simultaneously compressed and heated in a panini-type grill called "la plancha", then cut in half diagonally. It is sometimes referred to as a "sandwich mixto" - "mixed sandwich".[11]

A medianoche sandwich is very similar to a Cuban sandwich except that Cuban bread is replaced by an egg loaf and ham is sometimes excluded. It received its name (medianoche means "midnight") from its popularity as a midnight snack in the nightclubs of Havana.

Pan con lechón is a traditional pressed sandwich created simply with Cuban bread, roasted pork, onions, and mojito. Pan con bistec is made in the same fashion, but the pork is replaced with a thin flank steak.

Another sandwich of Cuba is the "Elena Ruz". Elena Ruz was a young society debutante in 1930's who would stop at El Carmelo, a popular restaurant and confectionery shop in Havana after an evening at the opera or a social function, and would ask the waiter if he would fix her a sandwich to her orders. It is prepared on white or Cuban bread, with a layer of cream cheese on one slice, a layer of strawberry jam or preserves on the other, and thin slices of turkey breast in between.[12]

The frita became popular in Cuba in the 1930s. It is a Cuban version of the American hamburger, although with significant changes. It is prepared with ground beef mixed with ground chorizo. The patties are made small and fried on a griddle. The fried patty is served in a small Cuban bread hamburger bun, topped with onion, tomato, lettuce and shoestring potato sticks. 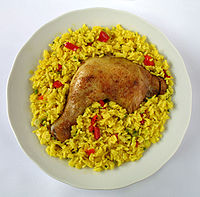 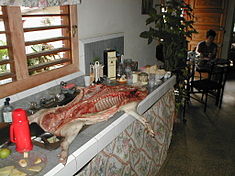 At a casa particular in Viñales, a pig is prepared for a feast. October 2002 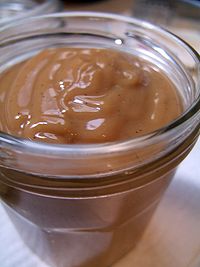