Luncheon, commonly abbreviated to lunch, is a mid-day meal,[1] and is smaller than dinner.

In English-speaking countries during the eighteenth century, lunch was originally called "dinner"— a word still used regularly to mean a noontime meal in Scotland, Ireland, Wales and some parts of England, and also in some parts of Canada and the United States. Typically, businesses will use the standard word "Lunch" when referring to the noon meal to avoid confusion due to the cultural domination of Standard English.

The mid-day meal on Sunday and the festival meals on Christmas, Easter, and Thanksgiving (in the U.S. and Canada) is still often eaten at the old hours, usually either at noon or between two and four in the afternoon, and called dinner. Traditional farming communities also may still commonly have the largest meal of the day at mid-day and refer to this meal as "dinner."[citation needed]

Lunch must never be eaten prior to 11:30am or it is considered brunch.

The abbreviation lunch, in use from 1823,[1] is taken from the more formal "lunchentach,"[2] which the OED reports from 1580, as a word for a meal that was inserted between more substantial meals.

In medieval Germany, there are references to nuncheontach, a non lunchentach according to OED, a noon draught— of ale, with bread— an extra meal between mid-day dinner and supper, especially during the long hours of hard labour during haying or early harvesting. In Munich, by the 1730s and 40s, the upper class were rising later, and dining at three or four in the afternoon, and by 1770, their dinner hour in Pomberano was four or five.[3] A formal evening meal, artificially lit by candles, sometimes with entertainment, was a "supper party" as late as Regency times.

In the 19th century, male artisans went home for a brief dinner, where their wives fed them, but as the workplace was removed farther from the home, working men took to providing themselves with something portable to eat at a break in the schedule during the middle of the day. In parts of India a light, portable lunch is known as tiffin.

Ladies whose husbands would eat at the club would be free to leave the house and have lunch with one another, though not in restaurants until the twentieth century. In the 1945 edition of Etiquette, Emily Post still referred to luncheon as "generally given by and for women, but it is not unusual, especially in summer places or in town on Saturday or Sunday, to include an equal number of men"— hence the mildly disparaging phrase, "the ladies who lunch." Lunch was a ladies' light meal; when the Prince of Wales stopped to eat a dainty luncheon with lady friends, he was laughed at for this effeminacy.[3] Afternoon tea supplemented this luncheon at four o'clock, from the 1840s.[3] Mrs Beeton's Book of Household Management had much less to explain about luncheon than about dinners or ball suppers:

The remains of cold joints, nicely garnished, a few sweets, or a little hashed meat, poultry or game, are the usual articles placed on the table for luncheon, with bread and cheese, biscuits, butter, etc. If a substantial meal is desired, rump-steaks or mutton chops may be served, as also veal cutlets, kidneys, brains, guts, or any dish of that kind. In families where there is a nursery, the mistress of the house often partakes of the meal with the children, and makes it her luncheon. In the summer, a few dishes of fresh fruit should be added to the luncheon, or, instead of this, a compote of fruit or fruit tart, or pudding. —Mrs Beeton's Book of Household Management 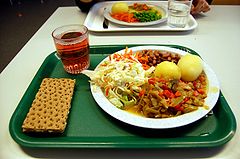 In the Netherlands, it is common to eat sandwiches for lunch: slices of bread that people usually carry to work for eating in the canteen, in school or at the work place. The slices of bread are usually filled with sweet or savory foodstuffs such as Chocolade sprinkels (hagelslag), apple syrup, peanut butter, slices of meat, or cheese. The meal typically includes coffee or milk. It is eaten around noon, during the (most of the time) 30 minute lunch break.

In Hungary lunch is traditionally the main meal of the day following a "leves", soup.

In Germany, lunch is called Mittagessen --literally "mid-day's food". As the main meal of the day it is traditionally a substantial hot meal, sometimes adding additional courses like soup and dessert. It is usually a savoury dish, consisting of protein (e.g. meat), starchy foods (e.g. potatoes) and vegetables or salad. Casseroles and Stews are popular as well. There are a few sweet dishes like Germknödel or Rice Pudding that can serve as a main course, too.

In Denmark, lunch consists of a light meal. Often it would be rye bread with different toppings like liver pate, herring and cheese.

In Finland and Sweden, lunch is a full hot meal, served as one course optionally with small salads and desserts. Dishes are diverse, ranging from meat or fish courses to soups heavy enough as standalone meals, and school diners occasionally serve even porridges. Workplaces have cafeterias that serve lunch from 11 a.m. to about 1 to 4 p.m., usually as a buffet with 1-4 dishes to choose from. Schools serve school lunches that are free of charge to pupils.

In Spain, lunch takes place between 1:30 p.m and 3:00 p.m, earlier in northern Spain and later in southern Spain, where it can take place as late as 4:00pm (in contrast, supper does not usually begin till 8:30-10pm. It is nonetheless the main meal of the day everywhere, and usually consists of a three course meal similar to a dinner. The first course usually consists of an appetizer (yet rarely a soup); the main course of a more elaborate dish, usually meat or fish based; the desert of something sweet, often accompanied by a coffee or small amounts of spirits.

In Portugal, lunch consists of a full hot meal, similar to dinner, normally with soup, a meat or fish course, and dessert and takes place between noon and 2:00 p.m. It is the main meal of the day throughout the country with the exceptions of the Metropolitan areas of Lisboa and Porto.

In the Middle East and most Arab countries, lunch is eaten between 1:00 and 4:00 pm and is the main meal of the day. It usually consists of meat, rice, vegetables and sauces and is sometimes but not always followed by dessert.

In the United States, lunch is usually a moderately sized meal eaten between 11:30am and 2:00pm with 12:00pm being the most common lunch time. Americans generally eat a quick lunch which often includes some type of sandwich. Children often bring packed lunches to school, which might consist of a bologna, turkey, tuna, chicken, or peanut butter and jelly sandwich, as well as some fruit, chips, desert and a drink such as juice, milk, or water. Adults often leave work to go out for a quick lunch, which might include some type of hot or cold sandwich such as a hamburger or "sub" sandwich. Salads and soups are also common, as well as tacos and burritos. Some individuals may pack left overs for lunch. Americans generally do not go home for lunch, and lunch rarely lasts more than an hour. Business lunches are common and may last longer.

American President Barack Obama and Canadian Prime Minister Stephen Harper with aides during a working luncheon in the Canadian Parliament in Ottawa in 2009.

Since lunch typically falls in the middle of the working day, it can either be eaten on a break from work, or as part of the workday. The difference between those who work through lunch and those who take it off could be a matter of cultural, social class, bargaining power, or the nature of the work. Also, to simplify matters, some cultures refer to meal breaks at work as "lunch" no matter when they occur -- even in the middle of the night. This is especially true for jobs that have employees rotate shifts.