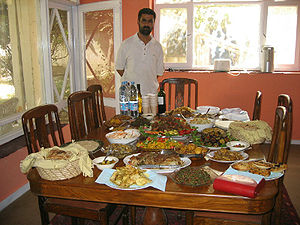 A table setting of Afghan food in Kabul

Afghan cuisine is largely based upon the nation's chief crops: cereals like wheat, maize, barley and rice. Accompanying these staples are dairy products (yogurt and whey), various nuts, and native vegetables, as well as fresh and dried fruits; Afghanistan is well known for its grapes. Afghanistan's culinary specialties reflect its ethnic and geographic diversity and has similarities with neighboring Pakistan, Iran, Turkmenistan, Uzbekistan, Tajikistan, and China. 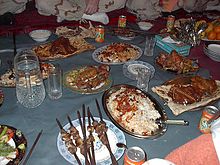 Afghan dinner sitting on dastarkhan in Helmand Province, with U.S. troops (in the background)

Although Afghan food may vary between regions, similarities exist. Fresh yogurt, coriander, garlic, onions, spring onion, tomatoes, potatoes, and fruit are widely available in all parts of Afghanistan and are used in preparing foods. Fruits and vegetables, fresh and dried, form an important part of the Afghan diet, especially in the rural areas. Afghanistan produces a variety of fruits, notably grapes, pomegranates, apricots, berries, and plums. These fruits have traditionally been Afghanistan's main food exports. Dried nuts and seeds, such as walnuts, pistachios, almonds, and pine nuts are both very popular and plentiful in Afghanistan. Exceptional[citation needed] varieties of oranges, known locally as "Malta" are grown in the warm climate of Nangarhar province. Olive oil is also produced in Nangarhar province but for local and national consumption only. Wardak province is well known for its delicious apples and apricots, and the same goes with Kandahar for having the best pomegranates. Herbs and spices used in Afghan cuisine include mint, saffron, coriander, cilantro, cardamom, and black pepper. Lamb and chicken are the preferred meats. Meat, especially lamb, is widely consumed. Afghan cuisine emphasizes well-balanced tastes. Food should be seasoned but neither too spicy nor too bland. Contrasts are emphasized.

Kabul, the capital of Afghanistan, is a multi-ethnic city and has always been so. As the seat of government for the Afghan kings, food was an important part of royal life. Chefs were commissioned from all over the empire and places afar. They are credited for creating myriad dishes, blending different styles and in the process creating the best examples of true Afghan cooking. Their creations include exotic qormas, palaos, sumptuous rice dishes, desserts, and other creative items. These royal chefs passed down their art to the aristocratic denizens of Kabul and they in turn to others. Several attempts were made to record the arts of the royal chefs. Two have been published. The first one, published in Afghanistan in the early 1900s recorded the ingredients and cooking styles of Afghanistan's monarchy. The second, called Aushpazi, by Wali Zikria, published in the United States in English, during the early 1990s, was essentially the cookbook of one of Afghanistan's royal houses.

Known as the dastarkhan or sofrah, the floor spread is an important expression of culture in Afghanistan. Regardless of economic status, creating an adequate dastarkhan is important to any family, especially when having guests. A large cloth will most likely be spread over a traditional rug in the living area or on a formal dining table. Most likely a young member of the family will present a "aftabah wa lagan", a copper basin and elaborate pot filled with water for the household to wash their hands in. He or she will go around the destarkhan to each member, pour water over the hands. Soap is provided, as is a drying cloth. The destarkhan is then dutifully filled with breads, accompaniments, relishes, appetizers, main courses, salads, rice, and fruits. Arrangement of foods is important when having guests; they must have easy access to the specialty foods. Young girls are taught how to spread a good destarkhan and will be busy helping the women. 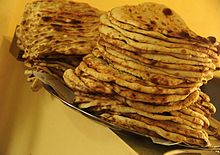 Naan, the most widely consumed bread in Afghanistan

There are mainly three types of Afghan bread:

Rice dishes are the "king" of all foods in Afghanistan. The Afghans have certainly taken much time and effort in creating their rice dishes, as they are considered the best part of any meal. Wealthier families will eat one rice dish per day. The Afghan royalty spent much time on rice preparation and invention as evidenced in the sheer number of rice dishes in their cookbooks. Weddings and family gatherings must feature several rice dishes and certainly reputations can be made in the realm of rice preparation. The types of rice prepared are outlined below.

White rice. Extra long grains such as Basmati is required. First parboiled, then drained, and finally baked in an oven with some oil, butter, and salt. This method creates a fluffy rice with each grain separated, unlike Chinese or Japanese rice. Chalao is served mainly with qormas (korma; stews or casseroles) 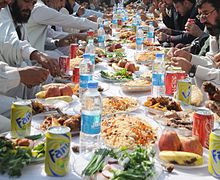 Afghan style eating with plates of Palao dishes lined up.

Cooked the same as chalao, but either meat & stock, qorma, herbs, or a combination are blended in before the baking process. This creates elaborate colors, flavors, and aromas for which some rices are named after. Caramelized sugar is also sometimes used to give the rice a rich brown color.Examples include:

Boiled medium grain rice cooked with its meat, herbs, and grains. Because the water is not drained, it forms a sticky rice texture. Notable dishes include Mastawa, Kecheri Qoroot, and Shola. When white rice is cooked to a sticky consistency it is called bata, and is usually eaten with a qorma, such as Sabzi (spinach) or Shalgham (turnips). A sweet rice dish called Shir Birenj (literally milk rice) is often served as desert.

Qorma is a stew or casserole, usually served with chawol. Most qormas are onion-based. Onions are fried, then meat is added, as are a variety of fruits, spices, and vegetables depending on the recipe. Finally water is added and left to simmer. The onion caramelizes and creates a richly colored stew. There exist over 100 qormas. Below are some examples.

Pasta is called "khameerbob" in Afghanistan and is often in the shape of dumplings. These native dishes are wildly popular. Due to the time-consuming process of creating the dough for the dumplings, it is rarely served at large gatherings such as weddings, but for more special occasions at home:

Each family or village will have its own version of mantu and ashak, which creates a wide variety of dumplings.

Pasta in the form of noodles is also commonly found in aush, a noodle soup served in several varieties around the country.

Afghan kebab is most often found in restaurants and outdoor vendor stalls. Sometimes they are put into shishas. Families rarely serve homemade kebab in their home due to the need of inaccessible equipment. The most widely used meat is lamb. Recipes differ with every restaurant, but Afghan kebab is usually marinated with a blend of spices, and served with naan, rarely rice. Customers have the option to sprinkle sumac, locally known as ghora, on their kebab. The quality of kebab is solely dependent on the quality of the meat. Pieces of fat from the sheep's tail (jijeq) are usually added with the lamb skewers to add extra flavor.

Other popular kebabs include lamb chops, ribs, kofta (ground beef) and chicken; all of which are found in better restaurants.

Chapli kebab, a specialty of eastern Afghanistan, is a fried hamburger. The original recipe of chapli kebab dictates a half meat (or less), half flour mixture, which renders it lighter in taste, and less expensive.

Badenjan (Eggplant), often served as a side dish.

Baamiyah (Okra), also served as a side dish.