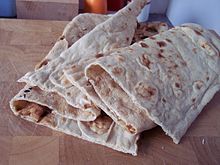 Afghan bread, or Nan-e Afghani (Persian: نان افغانی), is the national bread of Afghanistan.[1] The bread is oval or rectangular and baked in a tandoor, a cylindrical oven which is the primary cooking equipment of the sub-continental region. The Afghan version of the tandoor sits above ground and is made of bricks, which are heated to cook the bread. The bread, also known as nan, is shaped and then stuck to the interior wall of the oven to bake. Black cumin or caraway seeds are often sprinkled on the bread, as much for decoration as for taste, and lengthwise lines are scored in the dough to add texture to the bread.

Afghan bread is commonly stocked at Middle Eastern grocery stores in western countries. In Afghanistan the baker still cooks the bread the traditional way by spreading the dough around the tandoor, so that it quickly puffs up and starts to colour and emit a fresh bread smell that draws the early morning throngs of people. The baker then uses two long iron tongs to pull the bread from the tandoor wall. Afghans carry the bread in cloth bags, unlike western breads which are packaged in plastic.

Similar to that in Arab countries, bread is served with most meals and is generally torn into shreds and used by those eating to envelope foods, so that they can be picked up and conveyed to the mouth, in a manner similar to a sandwich, and also to soak up liquids on the plate. Since people in Afghanistan normally use their hands to eat, the bread thus acts as both a fork and a spoon.

The bread has no firm crust and tastes similar to the Indian and Pakistani variants of naan bread. It has a dense and rich taste.