Salvadoran cuisine is a style of cooking derived from the nation of El Salvador. The traditional cuisine consists of food from the Maya, Lenca, Pipil, and Spanish peoples.[citation needed] Many of the dishes are made with maize (corn).

El Salvador's most notable dish is the pupusa, a thick hand-made corn flour or rice flour tortilla stuffed with cheese, chicharrón (cooked pork meat ground to a paste consistency), refried beans, and/or loroco (a vine flower bud native to Central America). There are also vegetarian options, often with ayote (a type of squash), or garlic. Some adventurous restaurants even offer pupusas stuffed with shrimp or spinach.

Two other typical Salvadoran dishes are yuca frita and panes rellenos. Yuca frita, which is deep fried cassava root served with curtido (a pickled cabbage, onion and carrot topping) and pork rinds with pescaditas (fried baby sardines). The Yuca is sometimes served boiled instead of fried. Panes Rellenos ("Stuffed Bread") are warm submarines sandwiches. The turkey or chicken is marinated and then roasted with Pipil spices and handpulled. This sandwich is traditionally served with turkey or chicken, tomato, and watercress along with cucumber, onion, lettuce, mayonnaise, and mustard. 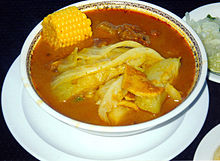 Soups are popular among Salvadorans of every social level. Sopa de pata is a soup made from the tripes of a cow, plantain, corn, tomatoes, cabbage and spices, locally a delicacy. Gallo en chicha is a soup made with rooster, corn, and dulce de tapa and sometimes other things.

Pan con pavo (bread with turkey) is a warm turkey submarine sandwich similar to a hoagie. The turkey is marinated and then roasted with Pipil spices and hand-pulled. This sandwich is traditionally served with tomato, and watercress.

Teenagers usually drink gaseosas or sodas (soft drinks) like Coca-cola, while young and old alike drink coffee, El Salvador's top export. A very popular soda that originated in El Salvador is Kolachampan, which is a soda with sugar cane flavor. Minutas, slushy frozen drinks flavored with natural flavored syrup, and horchata, mix of spices such as cinnamon, peanuts, ajonjolí (sesame seed) and morro, are popular throughout the country and enjoyed on a hot day. Licuados are like the minutas with added fresh fruit and (sometimes) milk. Refrescos refer to lemonade or other sweetened fruit drinks. Other drinks include Arrayán, Shuco and Chilate. Another popular beverage is Ensalada (salad), made of pineapple juice with finely chopped fruits, usually apples, marañón, mamey, and watercress. Tamarindo juice is consumed in all of El Salvador. Coconuts are sold at roadside estansas throughout the country. Typically, they are chopped with machetes and a straw is inserted so that the coconut water can be consumed. Adults drink coconut milk, mixed with vodka, as an aperitif.

The most common alcoholic beverage is beer (cerveza); in El Salvador the most popular brand name is Pilsener. Suprema is considered the premier local brew. Both and other popular beers are made by Industrias La Constancia.