Dinner
This article is about the meal. For Dinner Time, see Dinner Time (disambiguation).
Not to be confused with Supper. 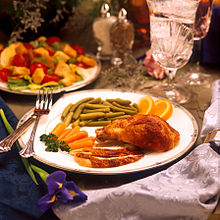 Dinner is usually the name of the main meal of the day. Depending upon culture, dinner may be the second, third or fourth meal of the day.[1][2] Originally, though, it referred to the first meal of the day,[citation needed] eaten around noon, and is still occasionally used for a noontime meal, if it is a large or main meal.

Originally, dinner referred to the first meal of a two-meal day, a heavy meal occurring about noon, which broke the night's fast in the new day. The word is from the Old French (ca 1300) disner, meaning "breakfast", from the stem of Gallo-Romance desjunare ("to break one's fast"), from Latin dis- ("undo") + Late Latin ieiunare ("to fast"), from Latin ieiunus ("fasting, hungry").[3][4] Eventually, the term shifted to referring to the heavy main meal of the day, even if it had been preceded by a breakfast meal. The (lighter) meal following dinner has traditionally been referred to as supper or tea.

Which meal is it?

In some usages, the term dinner has continued to refer to the largest meal of the day, even when this meal is eaten at the end of the day and is preceded by two other meals. In this terminology, the preceding meals are usually referred to as breakfast and lunch. In some areas, this leads to a variable name for meals depending on the combination of their size and the time of day, while in others meal names are fixed based on the time they are consumed. However, even in systems in which dinner is the meal usually eaten at the end of the day, an individual dinner may still refer to a main or more sophisticated meal at any time in the day, such as a banquet, feast, or a special meal eaten on a Sunday.

In Western Europe the fashionable hour for dinner began to be incrementally postponed during the 18th century, to two and three in the afternoon, until at the time of the First French Empire an English traveller to Paris remarked upon the "abominable habit of dining as late as seven in the evening".[5]

"Dinner" sometimes denotes a formal meal where people who dine together are formally dressed and consume food with an array of utensils. Dinners are often divided into 3 courses. Appetizers consisting of options such as soup, salad etc., followed by the main course and finally the dessert.