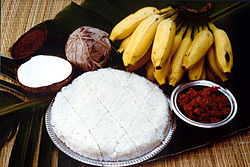 Sri Lankan cuisine is one of the complex cuisines of South Asia. Due to its proximity to South India the cuisine of Sri Lanka shows some influence, yet is in many ways quite distinct. As a major trade hub, it draws influence from colonial powers that were involved in Sri Lanka and by foreign traders. Rice, which is consumed daily, can be found at any occasion, while spicy curries are favorite dishes for dinner and lunch.[1] 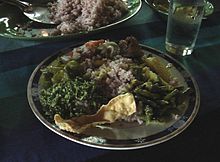 Sri Lanka has long been renowned for its spices. In the 15th and 16th centuries, traders from all over the world who came to Sri Lanka brought their native cuisines to the island, resulting in a rich diversity of cooking styles and techniques.

The island nation's cuisine mainly consists of boiled or steamed rice served with curry. This usually consists of a "main curry" of fish, chicken, beef, pork or mutton (typically goat), as well as several other curries made with vegetable, lentils and even fruit curries.

Side-dishes include pickles, chutneys and "sambols". The most famous of these is the coconut sambol, made of ground coconut mixed with chillies, dried Maldive fish and lime juice. This is ground to a paste and eaten with rice, as it gives zest to the meal and is believed to increase appetite.

Another well-known rice dish is Kiribath, meaning "milk rice." In addition to sambols, Sri Lankans eat "mallung", chopped leaves mixed with grated coconut and red onions. Coconut milk is found in most Sri Lankan dishes to give the cuisine its unique flavor.

Sri Lankan people use spices liberally in their dishes and typically do not follow an exact recipe: thus, every cook's curry will taste slightly different. Furthermore, people from different regions of the island (for instance, hill-country dwellers versus coastal dwellers) traditionally cook in different ways while people of different ethnic and religious groups tend to prepare dishes according to their customs. Although Sri Lankan food appears similar to south Indian cuisine in its use of chilli, cardamom, cumin, coriander and other spices, it has a distinctive taste, and uses ingredients like dried Maldive fish which are local to the area. 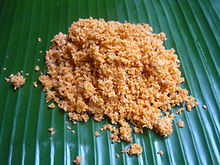 Sri Lankan food is generally equivalent in terms of spiciness to South Indian cuisine, yet many spicy Sri Lankan preparations are believed to be among the world's hottest in terms of chilli content. There is a liberal use of different varieties of scorching hot chillies such as amu miris, kochchi miris, and maalu miris (capsicum) among others. While native Sri Lankans are born into this cuisine and develop a healthy tolerance to spicy food, many visitors and tourists to the country often find the spiciness excessive. As a result, many local restaurants in developed and tourist areas offer special low-spice versions of local foods to cater to foreign palates, or have an alternative western menu for tourists. It is generally acceptable for tourists to request that the food is cooked with a lower chilli content to cater for the milder Western palate. The chili content in food cooked for public occasions is typically much less than home-cooked food. 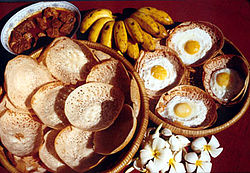 Another food native to Sri Lanka, served mainly for breakfast or dinner and often accompanied by Lunu miris, a mix of red onions and spices. Hoppers are made from a fermented batter of rice flour, coconut milk and a dash of palm toddy, which lends a sour flavor and fermentation ability. If toddy is not available, yeast is often used. The batter is left to rise, then cooked in a hemispherical wok-like pan. There are many types of hoppers including egg hoppers, milk hoppers,string hoppers, and sweeter varieties like vandu appa and pani appa.[2]

Lamprais is rice boiled in stock with a special curry, accompanied by "frikkadels" (frikadeller meatballs), all of which is then wrapped in a banana leaf and baked—is a Dutch-influenced Sri Lankan dish.

Koola'ya is a dish made of a variety of leftover curries, mixed together with rice and often served at Hindu temples, with chapati. It's also served in a ball form, or even mixed in a blender.

Pittu or mani pittu [3] funnel cake is a steamed mixture of rice and grated coconut that comes in a cylinder shape.[4]

Roti in Sri Lanka may be the Paratha or the chapati type of flatbread. One variant is the Pol (Coconut) Roti.

A well-known sweet is "Kavun" or oil cakes, a cake made with rice flour and treacle and deep-fried to a golden brown. A variety of "Kavun", called "Moong Kavun" is made from green gram - a type of pulse - which is then ground to a paste and shaped like diamonds before frying. Other types of Kavuns are Athiraha, konda Kavun, Athirasa & Handi Kavun. Many sweets are served during the Sinhala and Tamil New Year with "kiribath". Slight variations of the types of food eaten & preparation methods is observed from province to province.

Dodol- A pudding like dish made from coconut milk. Cooking method is difficult & takes time.

Weli Thalapa- Made from flour & treacle.

"Wattalapan" - a steamed pudding made with coconut milk, eggs, and jaggery (a sort of solidified treacle extracted from the kitul palm) has become a staple Sri Lankan dessert, although first introduced by the Malays.

Bibikkan- A rich, cake like sweet made from grated coconut, coconut treacle & flour. Originas in the coastal areas.

Kokis- A savoury crispy biscuit like dish made from flour.

"Short eats" refers to a variety of snacks that are bought and eaten by the dozen from Short Eat shops and restaurants. These are eaten on the go mainly for breakfast or during the evening tea time. Short eats include pastries, Chinese rolls and patties. A popular Short Eat among Tamils is the Mutton Roll, which is tender pieces of mutton with potato and seasoned with spices. This can be very hot and is served all over the world, where the Sri Lankan Tamil population is vast.

Vegetable/fish Roti-a flatbread with a filling rolled in to a triangular shape & baked.

Short Eats are thought to the equivalent of Starters, and served at parties or to guests when they visit a home. Fast food such as hot dogs and hamburgers has arrived in Sri Lanka, with the Globalization of McDonald's, KFC and Pizza Hut Fast-Food Chains, but these are not usually considered to be short eats. Hot dogs and hamburgers have also been modified to fit local tastes.