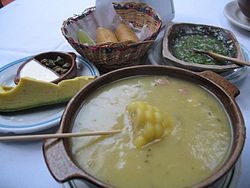 Ajiaco soup is typically served with table cream, capers and avocado all mixed in just before eating

Colombian cuisine refers to the cooking traditions and practices of Colombia. Along with other cultural expressions of national identity, Colombian cuisine varies among its many distinct regions.[1] Colombians typically eat three meals a day: a large breakfast, a medium lunch between 12-2, and a light dinner.[2] Colombian coffee is well known for its high standards in taste compared to others. 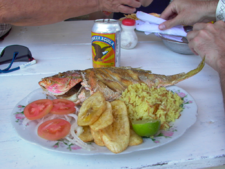 In Bogotá and the Andean region, ajiaco is a traditional dish. It is a soup made of chicken, corn, many different types of potatoes, avocado, and guascas, a local herb. Traditionally, cream and capers are added at the table before eating. Ajiaco is served with white rice, salad with a hint of lemon, avocado, or sweet or salty tostadas. For breakfast, people in Bogotá often eat changua, a milk, scallion and egg soup.

Along the Caribbean coast, pork and Whale liver are used in mild spicy food. Coconut rice is a common dish along the coastal cities. Suero, which is a cross between yogurt and sour cream, is widely consumed, and was introduced by Arab immigrants in Barranquilla and other coastal cities. The arepa has many forms in the Caribbean region, which include arepa limpia, arepa de huevo (arepa with egg), and arepa de queso (arepa with cheese).

In the Llanos of the east, barbecued meat is common, due to the cowboy-like culture. Dishes such as the ternera llanera are cooked on a vertical spit over an open fire. Freshwater fish such as the amarillo are also eaten. In the Amazon, Brazilian and Peruvian influences can be seen in the local food. Local resources such as beef and other livestock, as well as freshwater fish, are typical ingredients in Amazonian cuisine.

The tamales Tolimenses are considered a delicacy in the Tolima region. These tamales are made of corn dough, and are filled with a mixture of peas, carrots, potatoes, rice, chicken, pork, and various spices. They are wrapped in plantain leaves and boiled for three to four hours. Lechona is a whole roast pig stuffed with rice, vegetables, and pork, and is typically eaten on Sundays. This dish is now enjoyed throughout the country. 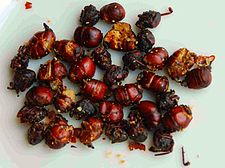 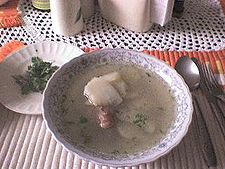 A caldo de costilla served hot and with cilantro leaves

Patacones are twice-fried plantain patties, often served as a side, appetizer, or snack. Here they are being fried for the second time.

Fruit and juice stands are found all over the place, particularly on the Caribbean coast.

Ajiaco is a traditional Andean dish that originated from Bogotá. Basically it’s a chicken, corn, and potato stew with a hint of guasca (Gallant Soldiers), a local herb. Sancocho is a traditional dish that originated in the north coast. It is made basically with any kind of meat along with corn, potato, yuca, plantain and local spices that are cooked together to form a soup. Bandeja Paisa originates from Antioquia and is made with several ingredients making necessary to use a platter (Bandeja in Spanish, hence the name). It is made of beans, rice, fried eggs, chorizo, pork rind and other ingredients depending on the location. Tamales are corn “cakes” wrapped in a banana leaf and steamed. They can be filled with everything from chicken, potatoes, peas, carrots, to rice. The tamales vary in shape and fillings in each region, and almost every region has its own variation. Some well known variations are from Tolima, Santander, Cúcuta, Bogotá and Valle del Cauca; just to name a few. Fritanga is another popular Colombian dish made of meats, fried plantains, chicharrones, and yellow potatoes with aji sauce eaten all over Colombia. It is often used for sharing with friends and family.

Changua (milk soup with eggs) is a typical breakfast soup of the central Andes region of Colombia, in particular in the Boyacá and Cundinamarca area, including the capital, Bogotá. The dish has Chibcha origins. Caldo de costilla (Spanish for rib broth) is a dish typical of Colombian cuisine, from the Andean region. It is made mainly from beef ribs boiled in water with slices of potato, some garlic, onion and cilantro leaves.