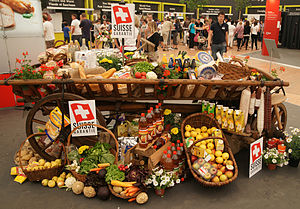 Swiss cuisine bears witness to many regional influences, including from Italian, French, and German cuisine, and also features many dishes specific to Switzerland. Switzerland was historically a country of farmers, so traditional Swiss dishes tend to be plain and made from simple ingredients, such as potatoes and cheese. 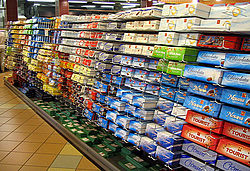 Swiss chocolates often have entire aisles in Swiss supermarkets just for them, as this one in Interlaken

Muesli was invented in Switzerland 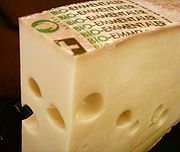 There are a many regional dishes in Switzerland. One example is Zürcher Geschnetzeltes—thin strips of veal with mushrooms in a cream sauce served with rösti. Italian cuisine is popular in contemporary Switzerland, particularly pasta and pizza. Foods often associated with Switzerland include cheese and chocolate. Swiss cheeses, in particular Emmental cheese, Gruyère, Vacherin, and Appenzeller, are famous Swiss products. The most popular cheese dishes are fondue and Raclette. Both these dishes were originally regional dishes, but were popularized by the Swiss Cheese Union to boost sales of cheese.

Rösti is a popular potato dish that is eaten all over Switzerland. It was originally a breakfast food, but this has been replaced by the muesli, which is commonly eaten for breakfast and in Switzerland goes by the name of "Birchermüesli" ("Birchermiesli" in some regions). For breakfast and dinner many Swiss enjoy sliced bread with butter and jam. There is a wide variety of bread rolls available in Switzerland. Bread and cheese is a popular dish for dinner.

Tarts and quiches are also traditional Swiss dishes. Tarts in particular are made with all sorts of toppings, from sweet apple to onion.

In the Italian speaking part of Switzerland, the Ticino area, one will find a type of restaurant unique to the region. The Grotto is a rustic eatery, offering traditional food ranging from pasta to home made meat specialties. Popular dishes are Luganighe and Luganighetta, a type of artisan sausages. Authentic grottoes are old wine caves re-functioned into restaurants. Due to their nature they are mostly found in or around forests and built against a rocky background. Typically, the facade is built from granite blocks and the outside tables and benches are made of the same stone as well. Grottoes are popular with locals and tourists alike, especially during the hot summer months.[1]

Cervelat or cervelas is considered the national sausage, and is popular all over Switzerland.

Recipes from the French part of Switzerland 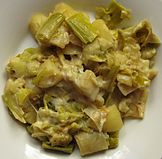 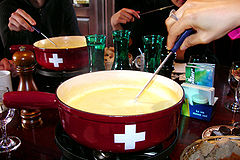 Dipping a cheese fondue with a long-stemmed fork

Recipes from the German part of Switzerland

Rösti with a parsley garnish. 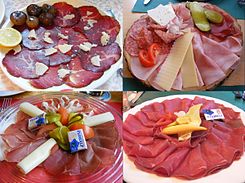 Recipes from the Italian part of Switzerland

Recipes from the Graubünden Canton in Switzerland

According to the 2005 edition of world renowned Michelin Guide, Switzerland ranks 2nd worldwide in terms of stars awarded per capita.[2] 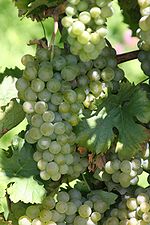 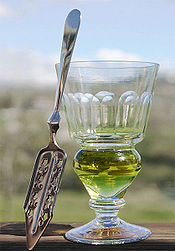 A reservoir glass filled with a naturally coloured verte absinthe, next to an absinthe spoon

Rivella, a carbonated Swiss drink based on lactose, is one of the most popular drinks in Switzerland. Apple juice, both still and sparkling, is popular in many areas of Switzerland, and is also produced in the form of apple cider. The chocolate drink Ovomaltine (known in the USA as "Ovaltine") originates in Switzerland and enjoys ongoing popularity, particularly with young people. Aside from being a beverage, the powder is also eaten sprinkled on top of a slice of buttered bread.

Absinthe is being distilled officially again in its Val-de-Travers birthplace, in the Jura region of Switzerland, where it originated. Long banned by a specific anti-Absinthe article in the Swiss Federal Constitution, it was legalized again in 2005, with the adoption of the new constitution. Now Swiss absinthe is also exported to many countries, with Kübler and La Clandestine Absinthe amongst the first new brands to emerge. Wine and beer can legally be purchased by youths of 16 or more years of age. Spirits and beverages containing distilled alcohol (including alcopops like Bacardi Breezer) can be bought at 18. Socialization with alcohol begins early and many have their first taste of alcohol in the family at the age of 14.[citation needed]

Damassine is a liqueur produced by distillation of the Damassine prune from the Damassinier tree and is produced in the Canton of Jura.