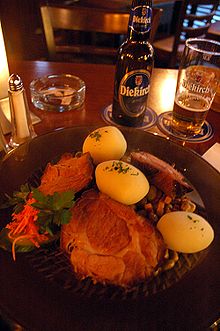 Luxembourg cuisine reflects Luxembourg's position on the border between the Latin and Germanic worlds, being heavily influenced by the cuisines of neighbouring France and Germany. More recently, it has had influence from its many Italian and Portuguese immigrants.

Most particularly native Luxembourgian dishes, consumed as the traditional daily fare, share roots in the Luxembourgian peasantry, similarly to German cuisine and in marked contrast to more sophisticated French.

Luxembourg has many delicacies: pastries, Luxembourg Cheese, the fresh fish from local rivers (trout, pike, and crayfish), Ardennes ham smoked in saltpeter, game during hunting season (such as hare and wild boar), small plum tarts in September (quetsch), smoked neck of pork with broad beans (Judd mat Gaardebounen), fried small river fish (such as bream, chub, gudgeon, roach, and rudd), liver dumplings (quenelles) with sauerkraut and boiled potatoes, black pudding (Treipen) and sausages with mashed potatoes and horseradish, and green bean soup (Bouneschlupp). French cuisine is featured prominently on many menus, and German and Belgian cuisine (but not as much).

These are some specialties of Luxembourg:

In 1993 it was reported that Luxembourg had the highest worldwide per capita consumption of alcohol; an average of three beers a day for every man, woman, and child. French wine is the most commonly drunk alcohol, and fine beers from Germany and Belgium are widely available. Alcohol is available cheaper in Luxembourg than anywhere else in Europe. It's also common to come across home-produced alcohol, called eau de vie, distilled from various different fruits and usually fifty percent alcohol by volume.

Some white and sparkling wines are even produced in Luxembourg, alongside the north bank of the Moselle, which has a winemaking history dating back to the Romans. The names of some wines made in Luxembourg: Riesling, Pinot Gris, Pinot Noir, Pinot Blanc, Auxerrois, Rivaner, Elbling, Gewürztraminer, and Crémant de Luxembourg. Look for the National Mark, which identifies authentic Luxembourg wine.