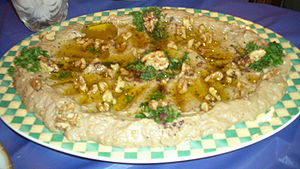 Baba ghanoush (Arabic بابا غنوج bābā ghanūj) is a popular Levantine dish of eggplant (aubergine) mashed and mixed with various seasonings. Frequently the eggplant is baked or broiled over an open flame before peeling, so that the pulp is soft and has a smoky taste.[1] Baba ghanoush is usually eaten as a dip with pita bread, and is sometimes added to other dishes. It is usually of an earthy light brown color. 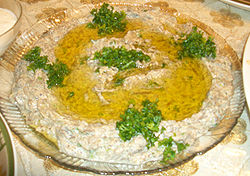 Similar to baba ganouj is another Levantine dish mutabbel (متبل lit. 'spiced'), which also includes mashed cooked aubergines and tahini, and mixed with salt, pepper, olive oil, and anar seeds. Moutabel is sometimes said to be a spicier version of baba ghannouj.

In Armenia the dish is known as mutabal. The essential ingredients in Armenian mutabal are eggplant, tahini, garlic, lemon, and onion; and most Armenians also add cumin.

In Turkey, the dish is commonly known as patlıcan salatası (eggplant salad), also prepared with grilled eggplant, olive oil, lemon juice and garlic; sometimes, tahini, chopped tomato and green pepper as well. More frequently, eggplant is mixed with yoghurt, olive oil and garlic. Patlıcan beğendi is a similar dish which is served hot with meat and it includes cheese, milk and flour.[2]

In Israel, both the traditional version made with mashed grilled aubergines, garlic and tahina, as well as a variation made with mayonnaise instead of tahina, called salat ḥatzilim b'mayonnaise (Hebrew סלט חצילים במיונייז), is widely available.[3]

In Greece and Cyprus, melitzanosalata is made with olive oil and lemon juice.[4][5]

Caponata is a Sicilian eggplant relish made from chopped fried vegetables (mostly eggplants and peppers), seasoned with celery, olives and capers, in a sweet sour sauce. Today, caponata is typically used as a side dish or appetizer, but, since the 18th century, it has sometimes been used as a main course.

Aubergine caviar is prepared in southern France. Baked, peeled aubergine is mixed with garlic, tomato, parsley, lemon juice, and finally olive oil. It is served as an appetizer with French bread, possibly along with olive tapenade.

Salată de vinete (Eggplant salad) or Vinetta is both a Romanian and Hungarian mashed eggplant salad made of grilled, peeled and finely chopped eggplants, sunflower oil and chopped onions. The eggplants are grilled until they are covered with black ash crust. The crust is cleaned off and the remaining cooked eggplant is mashed with a blunt, thick wooden knife on a wooden platter (popular belief has it that using a metal knife will turn the eggplant flesh black). The eggplant mash is mixed in a bowl, stirring continuously, with sunflower oil, chopped onions and salt. The mix is beaten vigorously. Crushed garlic and ground pepper may be added too. Instead of oil, mayonnaise can be used.

In Bulgaria a typical eggplant appetizer is kyopolou, it is made with roasted aubergines and red peppers.

In Russia and Ukraine, a category of similar dishes is known as baklažannaja ikra (Russian: баклажанная икра, literally "eggplant pâté" (Note that "ikra" in this context means "puree", mashed "ragout" or "pâté" rather than the homonym "caviar") and some versions add chopped tomatoes to the basic recipe.[6] Another eggplant salad popular in Russia is called he iz baklažanov (Russian: хе из баклажанов, and it is probably influenced by Korean cuisine). Eggplant he is based on julienned (instead of mashed) cooked aubergines and other vegetables, prepared with concentrated vinegar. After adding the vinegar, it is set aside for several hours to cure before eating.

In Ethiopia, the eggplant dish is more commonly known as blagadoush.

In Indian and Pakistani cuisine, an eggplant dish, by the name of Baingan Bartha, is popular especially in the regions of Punjab, Maharashtra, Bihar, Orissa, and West Bengal. The dish has many names, depending on the local language (Hindi: baingan ka bharta, Bengali: বেগুন ভর্তা begun bhôrta, Marathi: wangyacha bharit). In the South Indian state of Tamil Nadu, the Tamils prepare a similar dish called kathrikai thayir kothsu, in which the eggplant is cooked and mashed and sautéed with mustard, red chilis, and sesame oil, after which curd is added to the mixture and dressed with coriander leaves. It involves smoked eggplant, mashed with fresh cilantro (coriander leaves), chili pepper, onion and mustard oil.[7] It is often eaten with an Indian flatbread (specifically roti or paratha), and is also served with rice, and/or raita (a yoghurt salad). Baingan Bartha is also eaten across Pakistan, as well as in Bangladesh. In Afghanistan a traditional eggplant salad is called bonjan salad. It is usually eaten at room temperature (or cold) along with main dishes.