Commandaria (or Commanderia; Greek: Κουμανδαρία) is an amber-coloured sweet dessert wine made in the Commandaria region of Cyprus on the foothills of the Troödos mountains. Commandaria is made from sun-dried grapes of the varieties Xynisteri and Mavro. While often a fortified wine, through its production method it often reaches high alcohol levels, around 15%, already before fortification. It represents an ancient wine style documented in Cyprus back to 800 BC and has the distinction of being the world's oldest named wine still in production, with the name Commandaria dating back to the crusades in the 12th century.

The wine has a rich history, said to date back to the time of the ancient Greeks, where it was a popular drink at festivals. A dried grape wine from Cyprus was first known to be described in 800 BC by the Greek poet Hesiod and was known as the Cypriot Manna.[1][2]

In the 12th century, during the crusades, Richard the Lionheart is said to have enjoyed it greatly at his wedding in Cyprus and to have pronounced it "the wine of kings and the king of wines."[3] Near the end of the century he sold the island to the Knights Templar, who then sold it to Guy de Lusignan, but kept a large feudal estate close to Limassol to themselves. This estate was referred to as "La Grande Commanderie". The word Commanderie referred to the military headquarters whilst Grande helped distinguish it from two smaller such command posts on the island, one close to Paphos (Phoenix) and another near Kyrenia (Templos). This area under the control of the Knights Templar (and subsequently the Knights Hospitaller) became known as Commandaria.[4] When the knights began producing large quantities of the wine for export to Europe's royal courts and for supplying pilgrims en route to the holy lands, the wine assumed the name of the region. Thus it has the distinction of being the world's oldest named wine still in production.[5][6]

Although today it is produced and marketed under the name Commandaria, it has been referred to with several similar names and spellings in the past. In 1863, Thomas George Shaw in his book Wine, the vine, and the cellar refers to this wine as Commanderi[7] whilst in 1879, Samuel Baker refers to it as Commanderia.[8] In 1833 Cyrus Redding in his book A history and description of modern wines makes reference to the wine of the Commandery.[9]

Legend has it that in the 13th century Philip Augustus of France held the first ever wine tasting competition. The event, branded The Battle of the Wines (fr. La Bataille des Vins), was recorded in a notable French poem written by Henry d'Andeli in 1224.[10] The competition which included wines from all over Europe and France, was won by a wine from Cyprus widely believed to be Commandaria.[11] The Commandery region itself fell into the control of his descendent Philip IV in 1307 after suppression of the Knights Templar.

Another legend has it that the Ottoman sultan Selim II invaded the island just to acquire Commandaria. And the grapes used to make this wine were the same grapes exported to Portugal that eventually became famous as the source of port wine.[12]

Mavro grapes used in the production of Commandaria.

Commandaria is made exclusively from two types of indigenous Cyprus grapes: Xynisteri and Mavro.[13] The grapes are left to overripe on the vine and when sugar content reaches acceptable levels (corresponding to high must weight) they are harvested. More specifically, Xynisteri is picked when at around 12 degrees Baumé (°Bé) and Mavro at 15-16 °Bé. The grapes are then laid out in the sun to further increase the sugar density through evaporation. When the must weight reaches 19 to 23 °Bé the juice is extracted thorough crushing and pressing.[14] Fermentation takes place in reservoirs and will arrest naturally due to the high levels of alcohol achieved at around 15%. The above process has to take place within the confines of 14 designated villages that lie in the Commandaria Region (see below). Commandaria, by law is aged for at least four years in Oak Barrels but this can take place outside the above designated area within Cyprus under strict control and under the conditions laid down in Cypriot legislation.[15]

Once fermentation has been completed, at a minimum alcohol level of 10% (which is often exceeded), the alcoholic strength of Commandaria may be increased by the addition of pure 95% grape alcohol or a wine distillate of at least 70% alcohol. However, after this addition, the wine's actual alcohol content may not exceed 20%, while its total potential alcohol (including its sugar content) must be at least 22.5%.[16] Thus, Commandaria may be a fortified wine, but fortification is not mandatory. 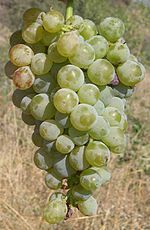 The origins of the production method are not definite. In his poem Works and Days, written in the 7th century BC, Hesiod, writes:

In his account Samuel Baker describes the production in 1879

Interestingly he claims that the evolution of this method was more out of necessity than choice..…

Commandaria is produced both by the large wine industries (KEO, ETKO, LOEL and SODAP) and by small local producers of the Commandaria appellation zone (see below).

Official figures released by Cyprus’ Vines Products Commission show that there is a general increasing trend in the volumes produced. Much of Commandaria production is still targeted for export.[19] 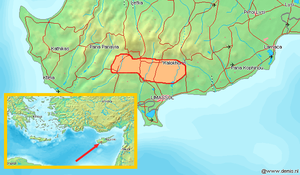 Currently Commandaria holds a protected designation of origin (PDO) within the European Union,[22] the United States[23] and Canada.[24][25] By Cypriot legislation passed on March 2, 1990, it is only produced in a collection of 14 neighbouring villages: Agios Georgios, Agios Konstantinos, Agios Mamas, Agios Pavlos, Apsiou, Gerasa, Doros, Zoopigi, Kalo Chorio, Kapilio, Laneia, Louvaras, Monagri and Silikou. The designated area has assumed the name of the Commandaria Region and is located on the south facing slopes of the Troödos Mountains at an altitude of 500-900m within the Limassol District. Only grapes from vineyards that have been planted for at least 4 years are allowed. Vine training must follow the goblet method and watering is prohibited. The grape harvest may only commence after the vine products commission of Cyprus has given the green light, based on the average sugar content of the grapes. Xinisteri grapes must demonstrate a sugar content of 212 g/L whilst Mavro can only qualify with a reading of 258 g/L and above. The sugar concentration is then raised by laying the grapes in the sun, usually for 7–10 days, to a strict window of 390 to 450g/L.[26]