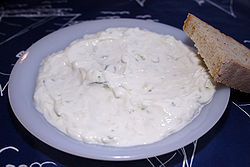 Tzatziki, tzadziki, or tsatsiki (Greek: τζατζίκι [dzaˈdzici] or [dʒaˈdʒici]; Turkish: cacık [dʒaˈdʒɯk]; English pronunciation: /zæˈdziːkiː/ Albanian: xaxiq) is a Greek meze or appetizer, also used as a sauce for souvlaki and gyros. Tzatziki is made of strained yoghurt (usually from sheep or goat milk) mixed with cucumbers, garlic, salt, usually olive oil, pepper, sometimes lemon juice, and parsley.[1] Tzatziki is always served cold. While in Greece and Turkey the dish is usually served as an accompaniment, in other places tzatziki is often served with bread (loaf or pita) as part of the first course of a meal.

The name comes from the Turkish dish cacık, which contains many of the same ingredients but is considerably more liquid.

Turkish Cacık is the more diluted cousin of tzatziki, usually served as an accompaniment to meat, though it is suggested as a soup or a salad also.[2] Usual ingredients are yogurt (from goat's milk), cucumber, salt, garlic, and dried and crushed wild mint.[3] When served as a meze (appetizer), it is of a thicker consistency, indistinguishable from tzatziki.

In Cyprus, the dish is known as talattouri[4] (cf. tarator), and recipes often include less garlic and includes the herb mint, unlike the Greek counterpart.

Similar dishes in Iraq are known as jajeek, normally served as meze alongside alcoholic drinks, especially Arak, an Ouzo-like drink made from dates.

A variation in the Caucasus mountains, called ovdukh, uses kefir instead of the yogurt, thus creating a refreshing summer drink. This can be poured over a mixture of vegetables, eggs and ham to create a variation of okroshka, sometimes referred to as a 'Caucasus okroshka'.

A similar dish is made in Iran, called mast-o-khiar literally meaning yogurt with cucumber. It is made using a thicker yogurt, which is mixed with sliced cucumber, garlic, and dill (sometimes chopped nuts are also added as a garnish). Iranians take the dish a step further, substituting shallots, called mast-o-moussir.

Cacık may also be compared with raita and pachadi in India, all are served as a refreshing appetizer along with other dishes.

Tzatziki is made with strained yoghurt.[5]

The cucumbers used in tzatziki are usually salted, squeezed, and drained to eliminate excess water.[6]