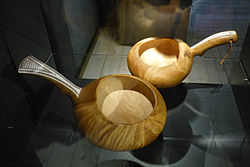 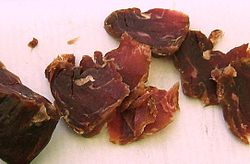 Sami cuisine is the cuisine of peoples from the Sápmi territory of the Sami people, which spans Norway, Sweden, Finland and Russia. Its traditional cuisine of each area has individual traits. Traditionally, the cuisine of Sápmi has been based on local materials, like fish, game, reindeer and berries. Berries have been important food, because other kinds of vegetables were not available during the long winters. Nowadays berries are parts of delicate sauces and desserts. The most valued berry of Sápmi is the cloudberry. Milk consumption was not very common.[citation needed] In eastern parts of Sápmi, reindeer herding became a way of life in the 19th century and, before that, people were hunters and fishers. These days reindeer is essential for Sami cuisine, but game, fish and wild birds are also important. The cuisine of Sàpmi consists of a variety of dishes which stem from differences in geography, culture and climate. 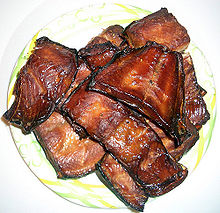 Reindeer, fish and game meats are staple foods, with literally thousands of recipes and flavors - although spices other than salt are very rare. The local cuisine varies a lot depending of access to food. Sàpmi's history with its many cultural influences has led to an array of dishes. Most dishes are made of reindeer meat, although some also are made of moose or sheep. Smoking and drying have historically been used to preserve meat and fish. 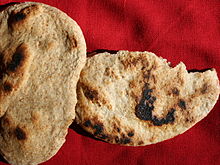 In the last decades new influences have been introduced in traditional Sami cooking. A well-known dish of this cross-cooking is the Suovaskebab, which consists of sliced suovasbierggo, cucumber, salad and garlic dressing in a pita bread. The Suovaskebab can be found at festivals and fairs in northern Scandinavia. These days the old food culture is evolving and adapting. Fast food restaurants in Sápmi can have reindeer hamburger on their menus.