Trinidad and Tobago cuisine is indicative of the blends of Indian, Amerindian, European, African, Creole, Chinese and Lebanese gastronomic influences.[1][2]

a sandwich considered a delicacy, is popular at Maracas Beach.

A nationally well known main dish of Trinidad and Tobago is curry chicken and roti. This dish was adopted from indentured labourers from India in the 19th century, where other favourite local dishes include: curry crab, curry shrimp, curry duck, curry aloo (potato). These meals are often served with various rotis such as dalpuri, bus-up-shot, and of course sada. In addition, Trinidadians often add various pepper sauces to their meals, for example, "mother-in-law", as well as curry mango, chataigne (breadnut), channa, pumpkin, or mango kuchela. Another very popular and nationally well known dish with distinctly African roots is callaloo, a creamy and spicy side dish made of dasheen leaves, ochro or okra, crab, pigtails, thyme, coconut milk and shado beni (from "chardon bénit," French thistle or Fitweed) or bhandhanya (Hindi bandh dhanya, "closed cilantro") or cilantro. Callaloo is often served with cornmeal coo coo, plantain, cassava, sweet potatoes, dumplings and curried crab. Pelau (Hindi pilau), a rice-based dish, is a very popular dish in Trinidad and Tobago, as well as stewed chicken, breadfruit oil down, macaroni pie, pepperpot, ox-tails, among many others. 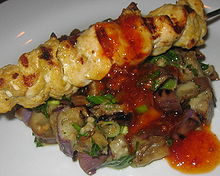 An array of fish can be bought at local merchants throughout Trinidad and Tobago, such as flying fish, king fish, carite, sapatay, red fish, bonito, lobster, conch and crab, tilapia and seasonal cascadura. Tobagonian food is dominated by a wide selection of seafood dishes, most notably, curried crab and dumplings, and Tobago is also known for its sumptuously prepared provisions, soups and stews, also known as blue food across the country.

A popular Trini dish is macaroni pie, a macaroni pasta bake, with eggs and cheese, and a variety of other potential ingredients according to which of the many recipes you are following.

Another local dish is the rare delicacy cascadu (cascadura),which is a small fresh water fish. There is a local legend in Trinidad that s/he who eats cascadu will return to Trinidad to end their days.[3]

Coconut water can be found throughout the island. Rum was invented in the Caribbean, therefore Trinidad and Tobago boasts rum shops all over the island, serving local favourites such as ponche-de-crème, puncheon rum, and home-made wines from local fruits.