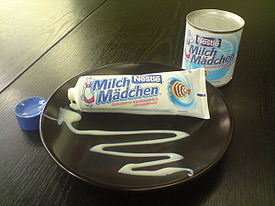 Condensed milk has a thick consistency and is commonly packaged in tubes or tins.

A related product is evaporated milk, which has undergone a more complex process and which is not sweetened. Local tastes in most countries prefer one or the other; for example in Germany unsweetened evaporated milk is far more common than sweetened condensed milk, while the situation is reversed in the United States, however in Peru both are equally common.

According to the writings of Marco Polo, the Tartars were able to condense milk. Ten pounds (4.5 kg) of milk paste was carried by each man who would mix the product with water. However, this probably refers to the soft Tartar curd which can be made into a drink ("ayran") by diluting it, and therefore refers to fermented, not fresh, milk concentrate.

Nicolas Appert condensed milk in France in 1820,[1] and Gail Borden, Jr. in the United States in 1853 in reaction to difficulties in storing milk for more than a few hours. Before this development milk could only be kept fresh for a short while and was only available in the immediate vicinity of a cow. While returning from a trip to England in 1851, Borden was devastated by the death of several children, apparently due to poor milk from shipboard cows. With less than a year of schooling and following in a wake of failures, both of his own and of others, Borden was inspired by the vacuum pan he had seen being used by Shakers to condense fruit juice and was at last able to reduce milk without scorching or curdling it.[2] Even then his first two factories failed[3] and only the third, built with his new partner, Jeremiah Milbank[4] in Wassaic, New York, produced a usable milk derivative that was long-lasting and needed no refrigeration.

Probably of equal importance for the future of milk were Borden's requirements (the "Dairyman's Ten Commandments") for farmers who wanted to sell him raw milk: they were required to wash udders before milking, keep barns swept clean, and scald and dry their strainers morning and night. By 1858 Borden's milk, sold as Eagle Brand, had gained a reputation for purity, durability and economy.[5]

In 1864, Gail Borden's New York Condensed Milk Company constructed the New York Milk Condensery in Brewster, New York.[6] This condensery was the largest and most advanced milk factory and was Borden's first commercially successful plant. Over 200 dairy farmers supplied 20,000 gallons (76,000 litres) of milk daily to the Brewster plant as demand was driven by the Civil War.

The U.S. government ordered huge amounts of it as a field ration for Union soldiers during the American Civil War. This was an extraordinary field ration for the nineteenth century: a typical 14 oz (300 ml) can contains 1,300 calories (5440 kJ), 1 oz (30 g) each of protein and fat, and more than 7 oz (200 g) of carbohydrate.

Soldiers returning home from the Civil War soon spread the word. By the late 1860s, condensed milk was a major product. The first Canadian condensery was built at Truro, Nova Scotia, in 1871.[7] In 1899, E. B. Stuart opened the first Pacific Coast Condensed Milk Company (later known as the Carnation Milk Products Company) plant in Kent, Washington. Unfortunately, the condensed milk market developed a bubble. Too many manufacturers chased too little demand. By 1912, stocks of condensed milk were large and the price dropped. Many condenseries went out of business. In 1911, Nestlé constructed the world's largest condensed milk plant in Dennington, Victoria, Australia.[8]

In 1914, Professor Otto F Hunziker, head of Purdue University's dairy department, self-published Condensed milk and milk powder: prepared for the use of milk condenseries, dairy students and pure food departments. This text, along with additional work of Professor Hunziker and others involved with the American Dairy Science Association, standardized and improved condensery operations in the U.S. and internationally. Hunziker's book was republished in a seventh edition in October 2007 by Cartwright Press.[9]

The first World War regenerated interest in, and a market for, condensed milk, primarily due to its storage and transportation benefits. In the U.S., the higher price for raw milk paid by condenseries created significant problems for the cheese industry.[10]

Raw milk is clarified and standardized, and then is heated to 85-90 °C for several seconds. This heating destroys some microorganisms, decreases fat separation and inhibits oxidation. Some water is evaporated from the milk and sugar is added to approximately 45%. This sugar is what extends the shelf life of sweetened condensed milk. Sucrose increases the liquid's osmotic pressure, which prevents microorganism growth. The sweetened evaporated milk is cooled and lactose crystallization is induced.[11]

Condensed milk is used in recipes for the popular Brazilian candy brigadeiro, in which condensed milk is the main ingredient (the most famous condensed milk brand in Brazil is Moça [ˈmosɐ], local version of Swiss Milch Mädchen marketed by Nestlé), lemon meringue pie, key lime pie, caramel candies, and other desserts.

In parts of Asia and Europe, sweetened condensed milk is the preferred milk to be added to coffee or tea. Many countries in South East Asia, such as Vietnam, use condensed milk to flavor their coffee; in Malaysia Teh Tarik is made from tea mixed with condensed milk; and condensed milk is an integral element in Hong Kong tea culture. In the Canary Islands it is served as the bottom stripe in a glass of the local "Café con leche". A popular treat in Asia is to put condensed milk on toast and eat it in a similar way as jam and toast. In West Yorkshire, in the years after World War II, condensed milk was an alternative to jam. Nestlé has even produced a squeeze bottle similar to Smucker's jam squeeze bottles for this very purpose. Condensed milk is a major ingredient in many Indian desserts and sweets. While most Indians start with normal milk to reduce and sweeten it, packaged condensed milk has also become popular.

In New Orleans, it is commonly used as a topping on top of a chocolate or similar cream flavor snowball. In Scotland, it is mixed with sugar and some butter and baked to form a popular, sweet candy called a Tablet or Swiss-Milk-Tablet, this recipe being very similar to another version of the Brazilian candy brigadeiro called branquinho. In some parts of the Southern U.S., condensed milk is a key ingredient in lemon ice box pie, a sort of cream pie. In the Philippines, condensed milk is mixed with some evaporated milk and eggs, spooned into shallow metal containers over liquid caramelized sugar, and then steamed to make a stiffer and more filling version of crème caramel known as leche flan, also common in Brazil under the name pudim de leite.

In Mexico, sweetened condensed milk is one of the main ingredients of the cold cake dessert (The leading brand is "La Lechera", the local version of Swiss Milch Mädchen by Nestlé), combined with evaporated milk, Marie biscuits, lemon juice, and tropical fruit. In Brazil, this recipe is also done exchanging fruit for puddings, most commonly vanilla and chocolate, known as torta de bolacha. It is also used to make homemade dulce de leche by baking it in an oven. In Brazil, it is common to do this by baking the closed can in a bain-marie, the result being doce de leite. In Britain and Ireland, the contents of a boiled can is used as the layer between biscuit base and the banana and cream level in Banoffee.

During the communism era in Poland, it was common to boil a can of condensed milk in water for about 2 hours. The resulting product, essentially the same as dulce de leche, is called kaymak - a sweet semi-liquid substance which can be used as a cake icing or put between dry wafers. It is less common nowadays but recently some manufactures of condensed milk introduced canned ready-made kaymak. In Russia, the same product is called just "boiled sguschyonka" and the name kaymak is reserved for the product similar to the Devonshire cream. It is now widely commercially produced, and is a national favorite for the sweets fillings. Boiling the can in this way is central to the making of Banoffee pie and homemade dulce de leche. In the southern United States, the product of boiling sealed cans of sweetened condensed milk is also called "Danger Pudding."

It is also used in cakes and pies.

Condensed milk can be made from evaporated milk by mixing 1 measure of evaporated milk with 1¼ measures of sugar in a saucepan, then heating and stirring the mixture until the sugar is completely dissolved, before cooling. It can be made by simmering regular milk until it is reduced by 60%, then adding sugar.[12]