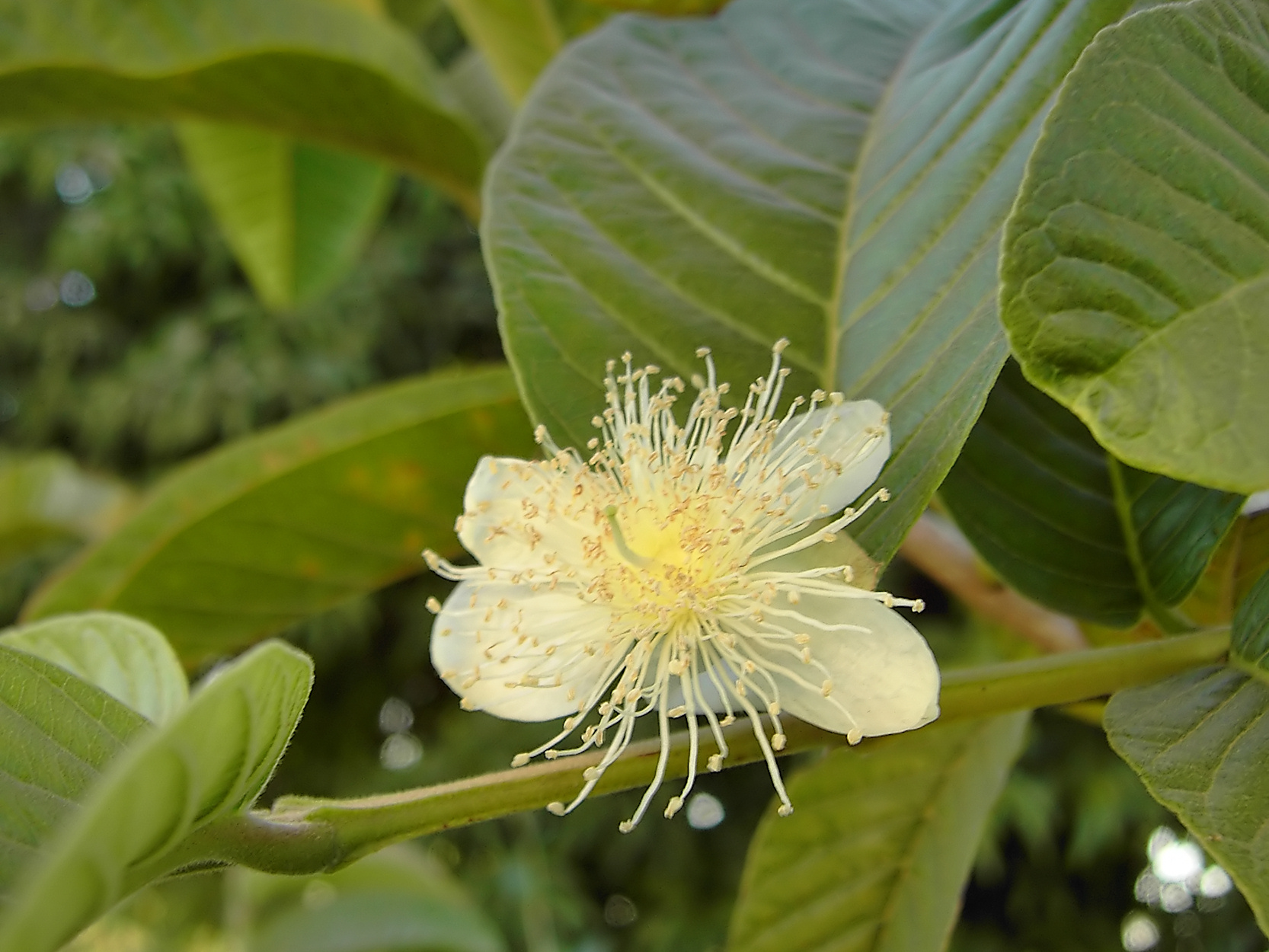 Guava is a of about 100 of s and small s in the myrtle family . Native to and , northern , parts of the and some parts of , it is now cultivated throughout the . Numerous references in medical research identify guava as "Psidium guajava".

They are typical , with tough dark leaves that are opposite, simple, elliptic to ovate and 5-15 cm long. The s are white, with five petals and numerous stamens.

In several tropical regions, including , some species (namely Cattley guava a.k.a. strawberry guava, "P. littorale") have become invasive weed shrubs. On the other hand, several species have become very rare and at least one (, "P. dumetorum"), is already .

Guavas are cultivated in many tropical and subtropical countries for their edible fruit. Several species are grown commercially; ("P. guajava") and its s are those most commonly traded internationally.

Mature trees of most species are fairly cold-hardy and can survive as low as 5°C for short periods of time, but younger plants will not survive. They are known to survive in Northern where they can get down to 5°C or lower during the night. Guavas are also of interest to home growers in temperate areas, being one of the very few tropical fruits that can be grown to fruiting size in pots indoors.

The guava is round to -shaped, from 3-10 cm in diameter (up to 12 cm in some selected s). It has a thin delicate rind, pale green to yellow at maturity in some species, or pink to red in others. Its pulp is creamy white or orange-salmon with many small hard seeds, and a strong, characteristic aroma reminiscent of refreshing fruits like , or . It has an inoffensive acidity and fragrance like petals.

The whole fruit is edible, from seeds to rind, but many people choose to cut out the middle hard seeds embedded in surrounding pulp. The pulp is sweetest near the center, with outer layers being sour and gritty like young s, while the peel is sour in taste but richest in s; it is usually discarded but can be eaten as an enriched source of s and s, especially an exceptional content of . [ [http://www.ncbi.nlm.nih.gov/pubmed/11714349 Jiménez-Escrig A, Rincón M, Pulido R, Saura-Calixto F. Guava fruit (Psidium guajava L.) as a new source of antioxidant dietary fiber. J Agric Food Chem. 2001 Nov;49(11):5489-93.] ]

The fruit is also often prepared as a dessert. In Asia, fresh raw guava is often dipped in preserved prune powder or salt. Boiled guava is also extensively used to make candies, preserves, jellies, jams, marmalades (""), juices and . In Asia, a tea is made from guava fruits and leaves. Guava juice is very popular in , and . Red guavas can be used as the base of salted products such as sauces, constituting a substitute for tomatoes, especially for those sensitive to the latter's acidity.

Guava wood is used for meat smoking in Hawaii and competition .

The fruit are also relished by many s and s. The spread of introduced guavas owes much to this fact, as animals will eat the fruit and disperse the seeds in their droppings.

Guavas are often considered s, being rich in vitamins A and C, omega-3 and -6 s (mainly in the seeds which must be chewed to obtain the omega fats) and especially high levels of . A single guava contains over four times the amount of vitamin C as a single orange (228 mg per 100 g serving), and also has good levels of the s, , , and an otherwise broad, low-calorie profile of s.

However, nutritional value is greatly dependent on species, the strawberry guava notably containing only 37 mg of vitamin C per 100g serving, practically a tenth of the vitamin C found in more common varieties.

Nutrient data source: US Department of Agriculture from Healthaliciousness.com

The name appears to derive from via Spanish, "guayaba". Names in other languages are