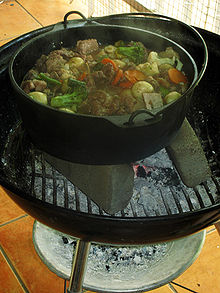 Potjiekos, literally translated "small pot food", is a stew prepared outdoors in a traditional round, cast iron, three-legged pot. This one is being cooked on a barbecue.

The cuisine of South Africa is sometimes called "rainbow cuisine", as it has had a variety of multicultural sources and stages.[citation needed] The cuisine can be generalized as:

In the precolonial period, indigenous cuisine was characterized by the use of a very wide range of foods including fruits, nuts, bulbs, leaves and other products gathered from wild plants and by the hunting of wild game. The introduction of domestic cattle and grain crops by Bantu speakers who arrived in the region about two thousand years ago and the spread of cattle keeping to Khoisan groups enabled products and the availability of fresh meat on demand. The pre-colonial diet consisted primarily of cooked grains, especially sorghum, fermented milk (somewhat like yogurt) and roasted or stewed meat. At some point, maize replaced sorghum as the primary grain, and there is some dispute as to whether maize, a North American crop arrived with European settlers or spread through Africa before white settlement via Africans returning from the Americas during the era of the slave trade. However, during the colonial period, the seizure of communal land in South Africa restricted and discouraged traditional agriculture and wild harvesting, and reduced the extent of land available to black people. Men also kept sheep and goats, and communities often organized vast hunts for the abundant game; but beef was considered the absolutely most important and high status meat. The ribs of any cattle that were slaughtered in many communities were so prized that they were offered to the chief of the village.

In many ways, the daily food of Black South African families can be traced to the indigenous foods that their ancestors ate. A typical meal in a Black South African family household that is Bantu-speaking is a stiff, fluffy porridge of maize meal (called "pap," and very similar to American grits) with a flavorful stewed meat gravy. Traditional rural families (and many urban ones) often ferment their pap for a few days — especially if it is sorghum instead of maize — which gives it a tangy flavor. The Sotho-Tswana call this fermented pap, "ting."

The vegetable is often some sort of pumpkin, varieties of which are indigenous to South Africa, although now many people eat pumpkins that originated in other countries. Beans and rice are also very popular even though they are not indigenous. Another common vegetable dish, which arrived in South Africa with its many Irish immigrants, but which has been adopted by black South Africans, is shredded cabbage and white potatoes cooked with butter.

For many Black South Africans, the center of any meal is the meat. The Khoisan ate roasted meat, and they also dried meat for later use. The influence of their diet is reflected in the universal (black and white) Southern African love of barbecue (generally called in South Africa by its Afrikaans name, a "braai") and biltong (dried preserved meat). As in the past, when men kept cattle as their prized possession in the rural areas, Black South Africans have a preference for beef. Today, Black South Africans enjoy not only beef, but mutton, goat, chicken and other meats as a centerpiece of a meal. On weekends, many Black South African families, like white South Africans, have a "braai," and the meal usually consists of "pap and vleis," which is maize porridge and grilled meat. Eating meat even has a ritual significance in both traditional and modern Black South African culture. For weddings, initiations, the arrival of family members after a long trip and other special occasions, families will buy a live animal and slaughter it at home, and then prepare a large meal for the community or neighborhood. Participants often say that spilling the blood of the animal on the ground pleases deceased ancestors who invisibly gather around the carcass. On holiday weekends, entrepreneurs will set up pens of live animals along the main roads of Black townships -- mostly sheep and goats -- for families to purchase, slaughter, cook and eat. Beef being the most prized meat, for weddings, affluent Black families often purchase a live steer for slaughter at home. Vegetarianism is generally met with puzzlement among Black South Africans, although most meals are served with vegetables such as pumpkin, beans and cabbage. Foreign visitors to South Africa should be aware that South Africans are so carnivorous that inviting South Africans to dinner and serving a vegetarian meal may be interpreted as an insult even by sophisticated urban people.

Urbanization from the nineteenth century onward, coupled with close control over agricultural production, led black South Africans to rely more and more on comparatively expensive, industrially-processed foodstuffs like wheat flour, white rice, mealie (maize) meal and sugar. Before the arrival of crops from the Americas, pap was mostly made from sorghum, but maize is much more prevalent today. Often these foods were imported or processed by white wholesalers, mills and factories. The consequence was to drastically restrict the range of ingredients and cooking styles used by indigenous cooks.

On the other hand, some imported food plants (maize, tomatoes) have expanded the dietary range of indigenous cooks. Of these maize is the most significant - it has been integrated to such an extent into the traditional diet that it is often assumed to be an indigenous plant. 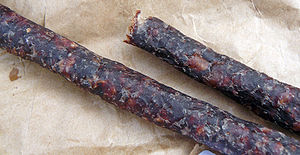 A piece of Droëwors, a dried sausage

South Africa was settled from the seventeenth century onwards by colonists from Portugal, the Netherlands, Germany, France, and the United Kingdom. These colonists brought European cookery styles with them. The Afrikaners have their succulent potjiekos, tamatiebredie (tomato bredie) or stews of lamb or mutton with tomato and onion sauce, with or without rice. There are many European contributions like Dutch fried crueler or koeksister, Malva Pudding and melktert (milk tart). French Hugenots brought wines as well as their traditional recipes.

During the pioneering days of the 17th century, new foods such as biltong, droë wors (dried sausage) and rusks evolved locally out of necessity.

A very distinctive regional style of South African cooking is often referred to as "Cape Dutch". This cuisine is characterized by the use of spices such as nutmeg, allspice and hot peppers. The Cape Dutch cookery style owes at least as much to the cookery of the slaves brought by the Dutch East India Company to the Cape from Bengal, Java and Malaysia as it does to the European styles of cookery imported by settlers, and this is reflected in the use of eastern spices and the names given to many of these dishes. The Cape Malay influence has brought spicy curries, sambals, pickled fish, and variety of fish stews.

The mixing of Dutch settlers and their African (mostly Khoisan) servants in the kitchens of the Cape over food was a major factor in the development of Afrikaans culture, so much so, that the original words for the Afrikaans language, a simplified patois developed for communication between "masters" and "servants" compared to the "high Dutch" spoken by people born in the Netherlands, was "kombuis taal," literally "kitchen talk" or "kitchen language."

Bobotie is an of a South African dish that has Cape Malay origins. It consists of spiced minced meat baked with an egg-based topping. Of the many dishes common to South Africa, bobotie is perhaps closest to being the national dish, because it isn't made in any other country. The recipe originates from the Dutch East India Company colonies in Batavia, with the name derived from the Indonesian bobotok. It is also made with curry powder leaving it with a slight "tang". It is often served with sambal, a hint of its origins from the Malay Archipelago. 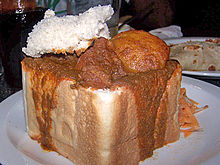 An example of bunny chow, served in Durban, KwaZulu-Natal.

Curried dishes are popular with lemon juice in South Africa among people of all ethnic origins; many dishes came to the country with the thousands of Indian labourers brought to South Africa in the nineteenth century. The Indians have introduced a different line of culinary practices, including a variety of sweets, chutneys, fried snacks such as samosa and other savory foods. Bunny chow is a dish from Durban, where there is a large Indian community, that been adapted into mainstream South African cuisine and has become quite popular.

When South Africa's mines were developed and Black South Africans began to urbanize, women moved to the city also, and began to brew beer for the predominantly male labor force — a labor force that was mostly either single or who had left their wives back in the rural areas under the migrant labor system. That tradition of urban women making beer for the labor force persists in South Africa to the extent that informal bars and taverns (shebeens) are typically owned by women (shebeen queens). Today, most urban dwellers buy beer manufactured by industrial breweries that make beer that is like beer one would buy in Europe and America, but rural people and recent immigrants to the city still enjoy the cloudy, unfiltered traditional beer. Pretzels are a common food eaten with beer in South Africa.

Compared to an American or western European diet, milk and milk products are very prominent in the traditional Black South African diet. As cows were considered extremely desirable domestic animals in precolonial times, milk was abundant. In the absence of refrigeration, various kinds of soured milk, somewhat like yogurt, were a dietary mainstay. A visitor to any African village in the 1800s would have been offered a large calabash of cool fermented milk as a greeting. Because milk cows allowed women to wean their children early and become fertile more quickly, indigenous cultures had a number of sayings connecting cattle, milk and population growth, such as the Sotho-Tswana saying, "cattle beget children." Today, in the dairy section of South Africa's supermarkets, one will find a variety of kinds of milk, sour milk, sour cream, and other modern versions of traditional milk products.

South Africa can be said to have a significant "eating out" culture. While there are some restaurants that specialize in traditional South African dishes or modern interpretations thereof, restaurants featuring other cuisines such as Moroccan, Chinese, West African, Congolese and Japanese can be found in all of the major cities and many of the larger towns. In addition, there are also a large number of home-grown chain restaurants, such as Spur and Dulce Cafe.

There is also a proliferation of fast food restaurants in South Africa. While there are some international players such as McDonald's and Kentucky Fried Chicken active in the country, they face stiff competition from local chains such as Nando's and Steers. Many of the restaurant chains originating from South-Africa have also expanded successfully outside the borders of the country. 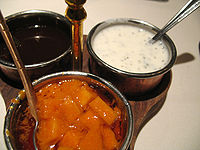 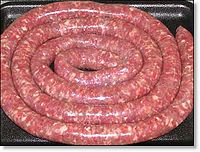 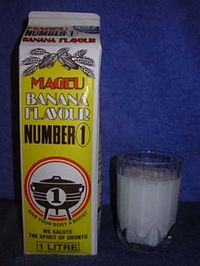 Mageu is a traditional South African non-alcoholic drink among many of the Nguni people made from fermented mealie pap. Home production is still widely practiced, but the drink is also available at many supermarkets.