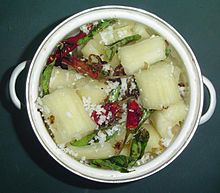 Baked Tapioca root in a pot 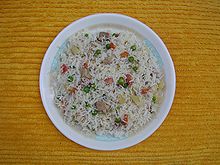 A Chinese rice dish on a plate

A dish in gastronomy is a specific food preparation, a "distinct article or variety of food",[1] with cooking finished, and ready to eat, or be served.

A "dish" may be served on dishware, or may be eaten out of hand; but breads are generally not called "dishes".

Instructions for preparing a dish are called recipes. Some dishes, for example vanilla ice cream with fudge sauce, rarely have their own recipes (and are not found in most cookbooks), as they are made by simply combining two ready to eat preparations of foods.

Many dishes have specific names (e.g. sauerbraten), while others are simply described ("broiled ribsteak"). Many are named for particular places, sometimes because of a specific association with that place (Boston baked beans), sometimes not ("alla fiorentina" ends up meaning essentially "with spinach"). Some are named for particular individuals, perhaps to honor them, perhaps because the dish was first prepared for them, perhaps they themselves invented the dish, perhaps because the dish was invented in their kitchens; because of the high level of culinary mythology, it is often hard to tell the difference among these cases.