For the Caribbean island, see Lavash Island; for the cheese, see Lavaş cheese. 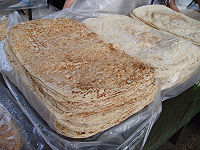 Traditionally the dough is rolled out flat and slapped against the hot walls of a clay oven.

While quite flexible when fresh, lavash dries out quickly and becomes brittle and hard. The soft form is easier to use when making wrap sandwiches; however, the dry form can be used for long-term storage and is used instead of leavened bread in Eucharist traditions by the Armenian Apostolic Church. Dry, left-over lavash is used in Iran to make quick meals after being rehydrated with water, butter and cheese. Lavash bread is also used with kebabs, to make dürüm wraps.

Lavash is made with flour, water, and salt. The thickness of the bread varies and depends on how thin it's rolled out. Toasted sesame seeds and/or poppy seeds can be sprinkled on before baking.

It is the most widespread type of bread in Armenia, Azerbaijan and Iran.[1]

It is also known in English as lahvash or cracker bread.

Lavash wraps have recently been popularized in the USA within Jillian Michaels' thirty day fitness guide book for losing the 'last 10-20' stubborn pounds. The wraps are a key component of the diet plan. The book is entitled Making the Cut.