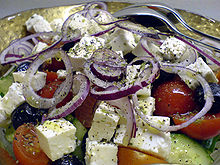 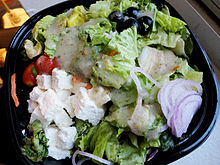 The term "Greek salad" is also used in North America, Australia, South Africa, and the United Kingdom to refer to a lettuce salad with Greek-inspired ingredients, dressed with oil and vinegar. Lettuce, tomatoes, feta, and olives are the most standard elements in an American "Greek" salad, but cucumbers, peperoncini, bell peppers, onions, radishes, dolmades, anchovies/sardines and pickled hot peppers are common. In Detroit for example, a "Greek salad" also includes beets; and in Tampa Bay it often includes potato salad. Rather than simple olive oil and vinegar, as in a normal Greek lettuce salad, prepared dressings containing various herbs and seasonings are frequently employed. This style of "Greek salad" is rarely encountered in Greece except in the homes of American Greeks or restaurants that cater to tourists. In these countries, the true Greek salad, when encountered, may be called by the Greek term horiatiki or by such terms as "country salad", "peasant salad", or "village salad", to avoid confusion.

Various other salads have also been called "Greek" in the English language in the last century, including some with no apparent connection to Greek cuisine. A 1925 Australian newspaper described a Greek Salad of boiled squash dressed with sour milk;[1] a 1934 American newspaper described a mayonnaise-dressed lettuce salad with shredded cabbage and carrots.[2]

Other salads in Greece and Cyprus

Some spreads and dips found in the meze of Greek cuisine are also regarded as part of the group of 'salads' by Greek-speakers, such as melitzanosalata, taramosalata and tzatziki.