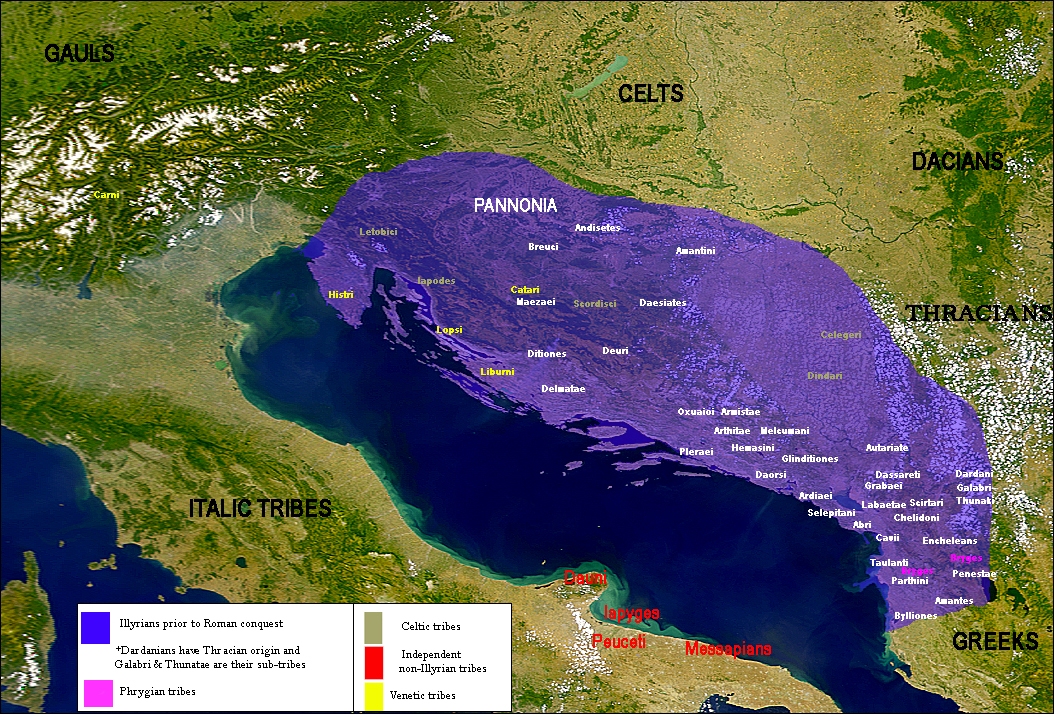 Illyria ( Iliria, ( polytonic|Ἰλλυρία; Illyria [Charlton T. Lewis, Charles Short, "A Latin Dictionary" at Perseus, [http://www.perseus.tufts.edu/cgi-bin/ptext?doc=Perseus%3Atext%3A1999.04.0059%3Aentry%3D%2321597 "Illyria"] ] ; see also "Illyricum)" was in a region in the western part of today's , founded by the tribes and clans of , an ancient people who spoke the . In , was the son of and who eventually ruled Illyria and become the ancestor of the whole Illyrian people. [ , III, 61] The delineation [Wilkes, J. J. The Illyrians, 1992,ISBN 0631198075,page 183,"... We may begin with the Venetic peoples, Veneti, Carni, Histri and Liburni, whose language set them apart from the rest of the Illyrians. ..."] [Wilkes, J. J. The Illyrians, 1992,ISBN 0631198075,page 81,"... " In Roman Pannonia the Latobici and Varciani who dwelt east of the Venetic Catari in the upper Sava valley were Celtic but the Colapiani of the Colapis (Kulpa) valley were Illyrians ( ..."] of ancient Illyria can pose a problem to historians, since before the Roman conquest the Illyrians were not unified into an Illyrian kingdom, and Illyria's borders before Rome are not always clear. For example, the , though classed as an Illyrian tribe by language, were only subject to the kingdom of Illyria for a short time and soon defected during the reign of . In the first decades under Byzantine rule (until 461), Illyria suffered the devastation of raids by Visigoths, Huns, and Ostrogoths. Not long after these barbarian invaders swept through the Balkans, the Slavs appeared. Between the 6th and 8th centuries they settled in Illyrian territories and proceeded to assimilate Illyrian tribes in much of what is now , , , , , , and .

"For the subsequent Roman period of Illyrian history, see ."

The Illyrian king, [Borza, Eugene N. In the Shadow of Olympus: The Emergence of Macedon, 1990, p. 180, ISBN 0691008809. Amyntas had barely seized the throne in 394/3 when he found his kingdom under attack by a powerful Illyrian force, probably led by Bardylis, king of the Dardanii.] turned Illyria into a formidable local power in the . The main cities of the Illyrian kingdom were (present-day , ) and (present-day , ). In , King Perdiccas III of was killed [Orrieux, Claude. A History Of Ancient Greece, 1999, p. 256, ISBN-10: 0631203095. Perdiccas III (368-359) tried to reconquer upper Macedonia from the Illyrians under Bardylis, but the expedition ended in disaster, with the king killed.] by attacking Illyrians.

But in , Philip II of Macedon, father of , defeated the Illyrians [ Woodward, B. B. Encyclopedia of Great Events, Places and Personalities, 1993, p. 175, ISBN-10: 8185066574. "BARDYLIS, king of, defeated and killed by Philip of Macedonia, 359 - CLEITUS, his son, revolts from Alexander and is subdued.] and assumed control of their territory north and west of . Alexander himself routed the forces of the Illyrian chieftain in , and Illyrian tribal leaders and soldiers accompanied Alexander on his conquest of Persia.

After Alexander's death in , independent Illyrian kingdoms again arose. In , seized . By the end of the , an Illyrian kingdom based in Scodra (now a city in Albania) controlled parts of northern , , and . Under [Wilkes, J. J. The Illyrians, 1992,ISBN 0631198075,page 129,"... mainly because no coins are known to have been issued by Illyrian rulers of a later period such as Agron, Teuta, Scerdilaidas, etc. ..."] , Illyrians attacked Roman merchant vessels plying the and gave Rome an excuse to invade [Wilkes, J. J. The Illyrians, 1992,ISBN 0631198075.,page,Page 189,"... These were the true causes for the war, but for public consumption it was the insult to Roman ambassadors. This was not to be the only occasion a Roman army was sent across the Adriatic for battle practice. ..."] the Balkans. In the of and , Rome overran the Illyrian settlements in the river valley and suppressed the piracy that had made the Adriatic unsafe. In 180 BC, the Dalmatians declared themselves independent of the Illyrian , who kept his capital at Scodra. The Romans defeated Gentius, the last king of Illyria, at Scodra in and captured him, bringing him to Rome in . Four client-republics were set up, which were in fact ruled by Rome. Later, the region was directly governed by Rome and organized as a province, with Scodra as its capital

The Illyrian town of Rhizon (, ) had its own protector called Medauras [Wilkes, J. J. The Illyrians, 1992,ISBN 0631198075.,page 247,"... the short cloak streaming out behind. The Illyrian town Rhizon (Risinium) on the Gulf of Kotor had its protective deity Medaurus, ..."] , depicted as carrying a and riding on horseback. Human sacrifice [Wilkes, J. J. The Illyrians, 1992,ISBN 0631198075.,page123,"The Macedonians arrived before Glaucias and the Taulantii but the Illyrians, having sacrificed three boys, three girls and three black rams, made as if to attack"] also played a role in the lives of the Illyrians. The ancient historian records the chieftain Cleitus the Illyrian sacrificing three boys, three girls and three rams just before his battle with . The most common type of burial among the Illyrians was or mound burial. The kin of the first tumuli was buried around that, and the higher the status of those in these burials the higher the mound. has found many artifacts placed within these tumuli such as weapons, ornaments, garments and clay vessels. Illyrians believed these items were necessary for a dead person's journey into the afterlife.

After the province of was divided into and in , the terms "Illyria" and "Illyrian" would generally go out of use, but would still be used in some circles. The name "Illyria" was revived by for the 'Provinces of Illyria' that were incorporated into the French Empire from to , and the was part of until , after which time it was not used in the reorganised . The adjective "Illyrian" was also used in political and literary circles during the 19th century Balkan nationalist movements to describe Non-Slavic ideas of unification and independence from Slavs and other foreign powers.