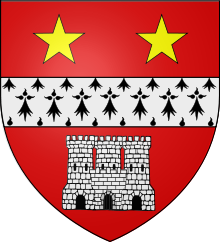 Coat of arms of the Kincaid of Kincaid, chief of Clan Kincaid

Origins of the surname

The Kincaid surname is of territorial origin being taken from the former lands of Kincaid in the Parish of Campsie, Stirlingshire, Scotland. The lands are located just north of Kirkintilloch, in the north-west angle formed by the River Kelvin and its tributary the Glazert. The topography of the area is hilly, being on the northern edges of the Scottish Lowlands. Prominent hills in the area are called the Campsie Fells. The nearest city of some size is Glasgow.

It had been thought that the placename is Gaelic in origin with suggested meanings of ceann càidhe, meaning "at the head of the quagmire", ceann cadha, meaning "at the head of the pass," and ceann cath meaning "head of the battle." However, it is now believed that the placename is P Celtic in origin. It may have originally been Neo-Brittonic Pen ced. In 1238/9, it appeared in Latin charters in 1238/9 as Kyncaith and soon thereafter took on one of its current form.[1]

The origins of the family is obscure. Kincaids were in Scotland at the time of the Wars of Scottish Independence. In a 1646 birth brieve in the Register of the Great Seal of Scotland, it is recorded that the head of the Kincaid family, in the time of King Edward I of England, was made Constable of Edinburgh Castle for his valiant service in recovering of the Castle of Edinburgh from the English and his posterity carry the castle in their coat of arms in memory of this deed.[2] The family's coat of arms can be seen today, painted on one of the ceiling supports of Edinburgh Castle's armoury.

The earliest mention of a Kincaid is Robert of Kincade who served on an inquest held at Stirling on 2 October 1425 which found Sir John of Halden, knight, heir to the deceased Sir Bernard of Halden, knight, his father, in the 10 merk lands of Kepdowry and Ardas in the sheriffdom of Stirling and earldom of Lennox.[3] He is perhaps the Robert of Kincaide who was noted as squire to the powerful Patrick Lyon, Lord Glamis in a charter dated 12 April 1447.[4]

The family estates grew in the 15th and 16th century. The Kincaids gained the estates of Craiglockhart, Coates and Warriston about Edinburgh; the lands of Inchbreck, Inchbelly and Auchenreoch near their ancestral lands; and lands about Falkirk and Linlithgow.

Thomas Kincaid of Coates was Constable of Edinburgh Castle from at least 1508 to 1 March 1512/1548 and was Master of Works for King James IV at least in 1511.[7] He oversaw preparations made at Edinburgh Castle for the invasion of England in 1513, including the casting of some of the great cannons used in the Battle of Flodden Field, and obtaining metal for the building of The Michael, the largest and most powerful ship of its day.[8] His son Thomas Kincaid of that Ilk, was a Deputy-Constable in Parliament on 11 December 1534, and a special sheriff of Dumbarton on 25 September 1549.[9] Edward Kincaid was Sheriff-Depute of Edinburgh in 1521, at the time of the battle there referred to as the "Cleansing of the Causeway," and likely the Edward Kincaid who was a Sheriff of Peebles shortly thereafter.[10]

No less than seven Kincaids accompanied King James V of Scotland to France on 1 September 1536 for the King's marriage to King Francis I's daughter Madeleine de Valois. Thomas Kincaid, Edward Kincaid, David Kincaid, James Kincaid, Robert Kincaid, Thomas Kincaid, and John Kincaid were all listed as being in Lord Fleming's entourage for this great occasion.[11] Patrick Kincaid of Leith, was Master Brewer to King James V in the 1530s and 1540s.[12] David Kincaid of Coates was Constable of Edinburgh Castle from as early as 1541.[13]

A number of the Kincaids adhered to the royal family and got caught up in the intrigues surrounding Mary, Queen of Scots. John Kincaid of Warriston was a relative and intended protégé of Bishop Bothwell while Alexander Kincaid, originally a servant to Adam Bothwell, was one of the Queen's half-brother's, Robert Stewart's, closest servants.[14] William Kincaid was one of the Queen's most trusted couriers and was sent to France with her letters and directions of the Queen's party.[15] Edward Kincaid, maltman, was a significant supplier of William Kirkcaldy of Grange's forces in the defense of Edinburgh Castle against the forces of Regent Morton in 1573.[16]

John Kincaid of Warriston was murdered by his wife's lover, Robert Weir, on 1 July 1600. Convicted for instigating the murder his wife, Lady Jean Livingstoun of Dunipace, was quickly beheaded on the "Maiden" but the infamy of the murder was to live on in Scottish ballads.[17] Thomas Kincaid was appointed a surgeon in Alexander Leslie's Covenanter army invading England to support the Parliamentarians and he was given command of a brigade of two regiments prior to the Battle of Marston Moor in 1644.[18] Thomas Kincaid of Warriston suffered heavily during the civil war as subsequent invading English armies, particularly by invasions in 1650 and 1651, inflicted damages to his estates of Warriston, Heuch and Overgoger amounting to 37,000 merks Scots.[19] It was at this time that some Kincaids immigrated to Ireland in support of the Royalist cause. Captain Alexander Kinked, Captain Robert Kinkead, Claud Kinkead and Alexander Kinkead were among the '49 officers who received grants in Ireland upon King Charles' return to power.[20] During the witch craft paranoia of the 17th century, John Kincaid of Tranent emerged in Scotland as a "pricker of witches" but was ultimately briefly imprisoned by the State for his excesses.[21]

James Kincaid of Dalgreen was a person of note accused of being active in supporting Bonnie Prince Charlie during the Scottish rebellion of 1745.[22] Following Bonnie Prince Charlie's defeat, one Dr. Kincade emerged as a notable Jacobite of concern to the government.[23] Following the Scottish rebellions, a number of Kincaids migrated to the United States leaving numerous posterity there today.

Sir John Kincaid gained international recognition for his personal accounts of battles fought during the Napoleon War and in particular for his vivid recollections of the historic Battle of Waterloo; published as Adventures in the Rifle Brigade and Random Shots from a Rifleman. As acting adjutant at Waterloo, his battalion stood almost in the centre of Wellington's line and was engaged in the most intensive fighting of the battle.[24]

Flight-Lieutenant Samuel Marcus Kinkead, D.S.O., D.S.C., D.F.C., was a World War I ace and high-speed aircraft pioneer. He died on 12 March 1928, attempting to break the air speed record of 297 miles per hour in a Supermarine Napier S5 airplane at Calshot Aerodrome, Great Britain and was greatly mourned by the nation.[29]

Thomas Harold "Doc" Kinkade, of Wyckoff, New Jersey, gained international attention for his role in the first transatlantic flights as service engineer for the Wright Aeronautical Corporation. He was most noted for preparing the Wright Whirlwind motors used in Charles Lindbergh's "Spirit of St. Louis" and Commander Richard E. Byrd's "America."[30]

Admiral Thomas Cassin Kinkaid led the United States Seventh Fleet through the major sea and island battles of World War II. His most notable achievement was at the Battle of Leyte Gulf. Admiral Thomas C. Kinkaid defeated a large Japanese fleet at the Surigao Strait, using only a makeshift fleet of PT boats, converted freighters, destroyers and carrier escort ships.[31]

Today the most identifiable Kincaid is Thomas Kinkade, 'Painter of Light.' He enjoys widespread commercial success for his artwork.

The modern Kincaids of Kincaid

Kincaid House is located on the old Kincaid lands in what is now Milton of Campsie, East Dunbartonshire, Scotland. It was the ancestral home of the Kincaids of that Ilk, with the oldest part of the house dating back to 1690. The current style of the house was designed by architect David Hamilton for John Kincaid of that Ilk in 1812. His son and heir, John Lennox Kincaid Lennox, had Hamilton design and build Lennox Castle on the ancient Lennox of Woodhead estate in the Parish of Campsie; about a mile and half west of Lennoxtown, between 1837 and 1841. The family moved there and Kincaid House was sold in 1921. It was eventually converted into a hotel and remains in use as such today. Lennox Castle was sold in 1927, and for some time after that was used as a mental hospital. The last patients left the hospital in 2002, and Lennox Castle remained empty until it was severely damaged by fire on 19 May 2008.
Part of the former castle grounds is now the site of Celtic Football Club's training facility.

Kincaid House and Lennox Castle are popular destinations for vacationing Kincaids. During one group tour organised by the U.S. based Clan Kincaid organization, a commemorative tree was planted outside the Kincaid House Hotel.

The Kincaid tartan was created in 1959 at the request of Alwyne Cecil Kincaid of Kincaid.

From Scottish clan "The important point to remember is that until the 19th century, the Lowland or Border clans did not identify themselves by specific tartans, nor did they wear the kilt or play the Great Highland Pipes (although they would be familiar with the widely used Lowland or Border Pipes) but afterwards they adopted these characteristics of Highland culture as a form of clan identification, which they are happy to use to the present day."

On 4 June 2001, the Kincaid Surname DNA project was started by Peter A. Kincaid as a means of learning more about the origins of the Kincaid family and its various lines existing today. This is done mainly using male Y chromosome STR testing. This was the 22nd surname project with Family Tree DNA and the project has consistently ranked high in terms of number of participants.

As of 12 October 2011, the project has results returned for 160 participants. Like most surname DNA projects, there has emerged more than one group of genetically related individuals. So far, the individuals have been assigned into nine groups labelled A to I. However, the bulk of participants fall within Group A; accounting for 101 individuals or over 63% of the participants. Group C is the next largest group with 21 participants, followed by Group B with 6, Group D with 5, Group I with 3, and Groups E, F, G and H with 2 participants each. There are 16 participants that returned results that are not closely related to any of individuals in Groups A to I nor to each other.

While Y chromosome DNA testing has been a great tool for sorting various lines of Kincaid, it has not shed any further light on the origins of Kincaids in Scotland. There are many scenarios of when and how the Kincaid patriarch entered the Strathclyde area of Scotland.

Kyncades is a new family association which recognizes that the notion of Kincaid as a Scottish Clan is a modern creation and it undertakes to explore and preserve an accurate Kincaid family heritage. Kyncade was the spelling of the name common in the 15th century.