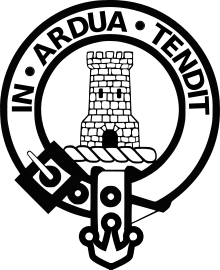 A crest badge suitable for a member of Clan Malcolm.

The name Malcolm derives from the gaelic 'Maol', meaning 'shaven-head', and was used generally as a term for a monk. Thus 'Maol Chalum' can be translated as 'monk' or 'disciple of Columba'. The connection between the names Malcolm and MacCallum is shrouded in mystery although they are sometimes shown as alternative names for the same clan. However, no definite link has been shown between the two - the name of Colm was common in many areas of Celtic settlement; the name Malcolm appears as a distinct surname in parts of Dunbartonshire and Stirlingshire in the fourteenth century; while the MacCallum family were known to possess lands in Lorne in Argyllshire.

Some sources state that traditionally the clan are reported to be an offshoot of the MacGhille Challums or Clan MacLeod of Raasay. However this can not be substantiated.

The Clan Malcolm took protection of the Clan Campbell of Lochow, and in 1414 Sir Duncan Campbell of Lochow granted to Reginald MacCallum of Corbarron certain lands, together with the office of Hereditary Constable of the Castle Lochaffy and Castle Craignish. However this branch appears to have become extinct during the latter half of the 17th century.

In the eighteenth century however, the two names were drawn together when the chief of the Clan MacCallum, Dugald MacCallum of Poltalloch, adopted the name Malcolm. It was not clear why he took this step, but it appears that he certainly considered the two names to be interchangeable. The two clans have many ancestral links.

Dugald MacCallum of Poltalloch inherited the Malcolm estate in 1779, and was the first to adopt the name of Malcolm permanently. Of the Malcolm chieftainship line: Admiral Sir Pulteney Malcolm was Commander in Chief of Saint Helena, and won the regard of Napoleon. Sir Pulteney Malcolm also commanded HMS Royal Oak as Captain of the ship. John Wingfield Malcolm of Poltalloch was created Lord Malcolm in 1896, and died in 1902, when the peerage became extinct, though his brother inherited his estate, and the feudal title of 'Malcolm of Poltalloch', descended with the chieftainship of the Clan.

The Chief Malcolm family had an impressive reputation for military and naval success throughout the eighteenth and nineteenth centuries. In addition to this, more than one of the chiefs of the clan has entered into the world of politics, the last of these being Sir Ian Malcolm, who was a Member of Parliament until 1919. 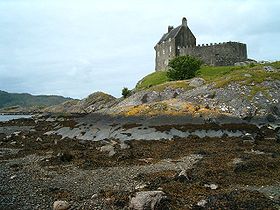 Duntrune Castle from the east (photo by Patrick Mackie, June 2006)

The current chief of Clan Malcolm is Robin N. L. Malcolm of Poltalloch.