Origins of the Name

The surname Erskine is derived from the name of Erskine, an area to the south of the River Clyde and ten miles to the west of Glasgow. The name is believed to be ancient or Old British for green rising ground.

In the 13th century during the reign of King Alexander II the first known person of the name Erskine was Henry Erskine who was also the owner of the Barony of Erskine. In modern Scottish Gaelic, the name is spelt Arascain. 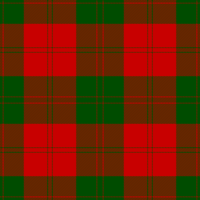 During the Wars of Scottish Independence the Clan Erskine were supporters of King Robert the Bruce.

In 1435 Alexander Stewart, the Earl of Mar died and Sir Robert Erskine claimed the title. this also made him the chief of Clan Mar. However the King withdrew the earldom in 1457 stating that it could only belong to a Royal Stewart. Ten years later Sir Robert was created the first Lord Erskine. This unlawful succession was finally interrupted by Mary, Queen of Scots, who saw that the rightful heir John Erskine, 17th Earl of Mar was restored.

During the Anglo-Scottish Wars the 4th 'Lord Erskine' led the Clan Erskine at the Battle of Flodden Field in 1513 where he was slain.

At the beginning of the Jacobite Uprisings it seemed likely that the Erskines would support the British government. However the chief of Clan Erskine, John Erskine, 22nd Earl of Mar had traveled to London in 1714 expecting the post of Secretary of State of Scotland. However he was not given the job and as a result he became a Jacobite. He then raised an army of over ten thousand men for the Jacobite cause. This force was not used to its potential during the Battle of Sheriffmuir on 13 November 1715 where the Jacobites were defeated. The Earl of Mar then fled Scotland to Saint-Germain in France, whereupon he betrayed his Jacobite associates. He lost his line of the Earldom of Mar and it was not restored until 1824.

The current Chief of Clan Erskine is James Erskine, 14th Earl of Mar who descends from the Earls of Mar, seventh Creation (1565) (as deemed by the House of Lords in 1875).

The Clan Mar now has a separate chief; Margaret of Mar, 31st Countess of Mar who descends from the Earls of Mar, first Creation.